We have Liz Jasper, author of Underdead joining us today with an absolutely brilliant blog. She's an EPPIE award winning mystery writer and her books are a wonderfuly way to spend a few holiday moments. It was hilarious when I saw the title of her blog, since More magazine once featured a small tidbit about me called, the kid with the crayons. I'd like to say that great minds think alike, but I don't want to drag Liz down to my level.
Even more exciting, Liz has agreed to give an ebook version of one of her books to a lucky commenter, so be sure to leave a comment!
What Vampire Mysteries Have to Do With...Crayons

The genius about writing paranormals is, in theory, that you don't have to research the real world, you can just create your own. Aren't theories nice? The reality, however, is that I have to fact check all the time and the simplest things can send you off in wild-goose-chase land. Take this little section for example from Underdead In Denial:
"Dan Sterling—Drama Dan, as the students adoringly called him—had made another conquest. I tried to figure out what the big thrill was. I suppose Dan looked a little like Leonardo DiCaprio, if you imagined the famous actor redrawn with crayon colors. Dan Sterling’s eyes were sky blue, his cheeks were lightly flushed with pink sherbet and his hair was yellow straight out of the basic eight crayon box. He might be a little too boyishly handsome for my tastes, but that didn’t seem to be keeping just about everyone else from joining the Drama Dan fan club." 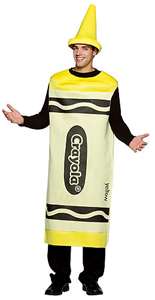 First off, I had to figure out how to spell crayon, because when I say "crayon" it actually comes out as "cran." Just a guess here, but if I said that Dan looked like he was fashioned from crans, no one would know what I was talking about.
That's not really research, of course, more of a spelling issue. But then I realized that I didn't know what crayon colors were in a box these days. So I had to do some research.
Now, I majored in Biology in college and I was a science teacher and I did ecological field research in China, Belize and Costa Rica. And let me tell you, being upside-down in the ocean with a snorkel, a ruler and an underwater tablet and trying to measure coral polyps before the next wave came or I was eaten by a pissed off eel was far easier than trying to understand the world of crayons.
When I was a kid all anyone had was the mongo box of 64 because it was a better deal than the few smaller boxes and our parents probably figured we'd stop asking them for crayons if they thrust a giant box of them at us every so often. And 64 does sound like a lot of crayons but let's be real. After about 3 days the box had been reduced to a fought-over stub of "sky blue", an untouched stick of burnt sienna, and a bewildering one called "flesh" that was...well let's just say I've never met anyone that particularly bright shade of yellowy-orange-beige. 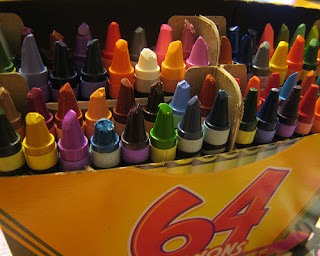 Anyway, the deal with being a professional writer is that you do have to try to actually be right about things, which means that if I describe Dan using crayon colors, I need to become a crayon expert.
And yet, come on. It's crayons. How hard can it be?

Well, you try it. Wikipedia has a list of 133 Crayola crayon colors with the year they were introduced and retired. But that should make it even easier, right?

Whatever. Pick the closest one and move on.

Okay. Lemon Yellow then. I remember Lemon Yellow. I think I drew a few hundred seriously awesome stick figures with Lemon Yellow hair when I was a girl.

Wait, whoops, Lemon Yellow was retired in 1990. Hmmm. Looks like Orange Yellow is out, too.


Laser Lemon is too day glow for hair. How about Dandelion? "Dan's hair was Dandelion..." Yikes. Way too cutesy. Canary? "Dan's hair was Canary..." it sounds like a bird not a crayon and is confusing. Banana Mania--is sort of fun but when I read "Banana Mania" I don't think crayon, do you?
How about Goldenrod? It's still around. It sounds like a crayon color to me without a lot of need further explanation. Except... it's really more strawberry blonde than blonde And would Jo, who is 22-years-old, have used Goldenrod, the hot color of 1958? I don't know. I kinda think she'd have been coloring with Banana Mania and Laser Lemon.


So we're left with... yellow. Okay, basic old yellow. Fine. "His hair was yellow." How do you know I'm talking about a yellow crayon and not just saying his hair is yellow? I need context.
Easy enough. I just have to reference a crayon box. Except... what size? All I know is the ratty, fought over 64 count box. Now I have to go to Amazon and look up bestselling current crayon box sizes and hope they've been the bestselling sizes for years so that the reference rings true for most readers.
At this point, I'm mostly aware that I've spent a ridiculous amount of time over crayons. I'm having a wild argument with myself. Why in the world did I ever come up with this stupid idea of describing a character in crayons? Just say he has blond hair and blue eyes and move on! Look how much time I've spent researching this one stupid paragraph! I could've brokered world peace by now.

And yet wait. There on Amazon is the eight count crayon box. Perfect in it's simplicity. A small, compact box of happiness and joy. And suddenly I'm done.

"... his hair was yellow straight out of the basic eight crayon box."

Except I still have to talk about his eyes and cheeks. But that can wait until after I've had some milk and cookies and maybe taken a little nap. 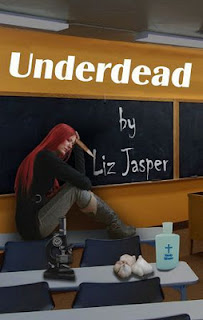 Liz Jasper is the award-winning author of the humorous UNDERDEAD mysteries about beleaguered science teacher Jo Gartner who is bitten by a vampire--sort of. If you don't usually read books with vampires in them, well, neither does Jo, so these are for you! Available now in ebook and trade paperback. The first in the series, UNDERDEAD, is on ebook special for 99 cents for the holidays.


Underdead
Liz Jasper
EPPIE Award winning mystery about newbie teacher Jo Gartner who thinks teaching eighth graders is deadly…until she’s bitten by a vampire. Sort of. And then things really get out of control. Dead bodies. Police. Undead. Outrageous lies to her mother. But then someone wants Jo dead…the traditional way!


Underdead in Denial
Almost undead teacher Jo Gartner is having a good year until she volunteers for the Haunted House fundraiser. That's just asking for the vampires to show up! And then there's another dead body. And more cops. And Jo is forced to decide which side she's on before someone gets rid of her permanently.

* * * * *
Thank you, Liz, and as a special holiday treat, we'll be giving away an ebook verison of one of Liz's books to a randomly selected person who leaves a comment.

So make sure you stop and say, Hi!

Laughing my butt off while reading this. I once spent an hour and a half looking up various uniforms worn by the Italian carabinieri just to make sure I described them correctly instead of based on my memory. The things we do for verisimilitude!

OMG, that was too funny! I loved the description. BTW, I have a large Christmas tin of crayons, I bet I could give you more yellow color names:-)

Hi Dana, wow, obscure Italian uniforms--got a laugh out of that. Did that take ages?

Ha, I never thought I would read a blog that covered vampire mystery and crayons! What fun. Thanks for the giggle.

Linda, nooooooo! You stay away with your giant bin of crayons. Actually, no. Bring them back. I have an odd urge to draw vast fields of yellow daisies (which pretty much involves pressing a yellow crayon down on the paper as hard as I can and scribbling madly.)

Hi Helen, glad I gave you a laugh. : ) Did you play with crayons across the pond?

Liz, I remember that basic box of 8 line from the book. It's so fun knowing the background. Your blog post is as amusing as your writing. Well, it *is* writing. But I mean you books. You have such a great voice. Love the books and loved the blog post.

Hi Kat, that was great to hear!

LOL, Liz! This cracked me up. I really have to pull Underdead closer to the top of my TBR pile!

I remember the "his hair was yellow straight out of the basic eight crayon box" from the book!! I thought it was GREAT, had writer envy that you used it. It's even better now that I know all about crayons.

Give me a fresh box of crayolas,a coloring book (dating myself here LOL)and I'd still be a good little girl for hours. Now I'll be thinking about all the different colors I'm missing.

Love your books, Liz and the blog was terrific.

Liz, I enjoyed your blog post very much! The things we writers have to go through. Your actual line is brilliant.

Way to me feel like my time was well spent--thanks! And, I had crayon envy too when I saw all those great colors.

Thanks, Shelley! Research for books is a strange, strange thing. : )

Thank you all for stopping by! I'm so glad to see so many cheery faces. Liz really is a terrific writer, isn't she? :)

Happy Holidays to all!

The winner of the ebook of UNDERDEAD...

Thank you all for participating and leaving comments--enjoyed them one and all!