Today's guest author is Jeffrey Marks, a biographer who has specialized in some of my favorite mystery writers. If you are interested in mysteries, you really need to check out his work and his website. You won't be disappointed. 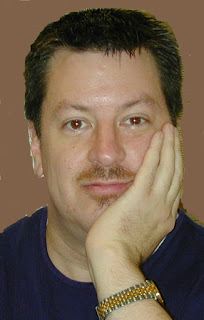 Why did you decide to write?
It’s never been a choice for me. I have been writing as long I have been able to write. Before that, I drew little picture books that told a story. I’ve never had any notion that I would be anything but a writer.

I started writing seriously (as in trying to become a professional) when I was 30. I worked for a magazine, a public relations person for an IT company and finally a novelist.

How much research do you do?
Since I write biographies, I do a ton of research. I have to verify every story I hear about the subject as well as find new things to say about a subject. I never want to be the writer who tells the same stories as everyone else. A biography is only as good as the new things it brings to light about the subject. In the cases of Craig Rice and Anthony Boucher, it was easy. There had been no biographies of these two fascinating authors. For Erle Stanley Gardner, it was a bit difficult, but I hope that I have brought the man more to life than other books.

What’s your favorite method for researching?
95% of Gardner’s papers were donated to the Harry Ransom Center at the University of Texas – Austin. He kept good (not great) records and those files totaled some 635 boxes of papers for me to look at. I could say using a research because for the past year and a half, that’s what I’ve done. I have a graduate student at the University of Texas – Austin who helps me. I received a fellowship, the Erle Stanley Gardner fellowship ironically, to do my research there; I spent 10 of the hottest Texas days doing research into Gardner and came away with tons of material. Now my research assistant answers the questions that I’ve come up with since my return.

Boucher also had his files at Indiana University. Craig Rice had no papers, following years of alcoholism. I’d much rather have the too many papers than not enough.

I love the convenience of the Internet, but I also double check the information I get out there. It’s so easy for people to copy and paste the same incorrect information. I ran into that with Craig Rice’s real name (which was Georgiana Craig Rice). It was like trying to deal with the 9 headed hydra to correct it. I still run across an incorrect reference from time to time.

When do you write/what is your writing day like?
A typical writing day is that there is no typical writing day. I usually have a stack of items to be added to the biography. I can do more research if I need to at a particular point or I can spend the time adding in the new information. Then, of course, there are days like today where I put on my marketing hat and go about talking about myself in hopes of piquing reader interest.

In the last six months, I’ve done quite a bit of writing on the Gardner biography. It’s been an intense time, but the first draft is done. Now I’m going back and editing. It’s my biggest book to date, 450 pages – so far, and it takes a lot of time to recheck my facts and edit it into a document I’m proud of.

What is the best advice someone has given you about writing? The worst advice?
The best advice was to just sit down and write. I tend to be a terrible procrastinator and would rather play on-line Sudoku than actually put words to paper.

How do you approach a new book? Outlines? Just an idea?
I usually do my planning in advance. The book proposals have to have an outline of sorts, and I usually use that as my framework. I don’t know how others do it, but I usually make my chapters each be a separate file on the computer and then I combine them all at the end. In that way, I can check them off and archive them safely once I’ve finished with a chapter.

Who are your favorite authors? Have any authors inspired you or influenced your work?
I love the older mysteries. I just finished rereading all of the early Ellery Queens and I’ve got all of the SS Van Dine books on my Kindle now. The e-book has been a boon to those of us who like those early authors who published before 1923.

If a reader took away one thing from your book(s), what would you like that to be?
Perhaps that authors have their own lives and each one brings a part of him or herself to the page. I’ve never met an author who didn’t share a part of themselves when they started writing.

Where do you see yourself as an author in five years?
Well, after a rather rough fall health-wise, I hope to be alive, kicking and able to get around on my own. I’d love to be writing more biographies and introducing more readers to these phenomenal authors I’ve met.

Where do you see the publishing industry going in the next few years and where do you see yourself within this industry?
You likely don’t want any predictions from me. I’m the guy who always buys the wrong technology. I had a Beta player for years, and we all know how that story turned out. So I very hesitantly bought a Kindle a few months ago, which likely ensure the dominance of the Nook in the long run. I think that e-books are here to stay and that more people will be publishing more books. I hope to still be doing what I’m doing, because I enjoy it so much.

Amy's note: Wow, you sound so much like me. I've consistently picked the wrong technology my entire life and have often joked that if I buy a stock, others need to sell immediately because the company is sure to go under. What can I say?
Brief Bio
Jeffrey Marks is a long-time mystery fan and freelancer. After numerous mystery author profiles, he chose to chronicle the short but full life of mystery writer Craig Rice.

That biography (Who Was That Lady?) encouraged him to write mystery fiction. His works include Atomic Renaissance: Women Mystery Writers of the 1940s/1950s, and Criminal Appetites, an anthology of cooking related mysteries. His latest work is a biography of mystery author and critic Anthony Boucher entitled Anthony Boucher. It has been nominated for an Agatha and fittingly, won an Anthony.

He is the long-time moderator of MurderMustAdvertise, an on-line discussion group dedicated to book marketing and public relations. He is the author of Intent to Sell: Marketing the Genre Novel, the only how-to book for promoting genre fiction.

His work has won a number of awards including the Barnes and Noble Prize and he was nominated for a Maxwell award (DWAA), an Edgar (MWA), three Agathas (Malice Domestic), two Macavity awards, and three Anthony awards (Bouchercon). Today, he writes from his home in Cincinnati, which he shares with his partner and two dogs.

Publishers Weekly, March 26, 2001
Every writer may deserve such a dedicated biographer and Rice's life is interesting (especially for hardcore mystery fans).

The Bookwatch, April 2001
"a must for her fans and an invaluable contribution to the literary genre."

Denver Post, June 3, 2001
“…the book provides a wealth of new information about this remarkable woman, …”

Jeff, your research and methods (possibly aside from Sudoku :) are an inspiration. I hope for continued healing and health, and more books in all forms to come.