Release day is getting closer for All She Loves!
(Sorry - my typing is not up to par because I nearly cut the tip off one of my fingers a few days ago when cutting veggies for soup, so please forgive any typos. Anyway...)

The Archer Family Regency Romances series is  completed, although I have had requests for some other stories to there may be related ones here and there in the future. But never fear, I have not stopped writing Regencies. 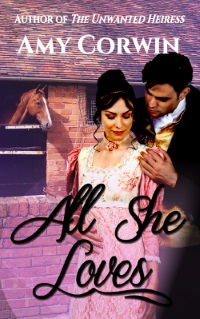 Wreck and Ruin  is a Regency that is still on the drawing board and will hopefully be released by Drakon Publishers sometimes during the summer of 2017. Trust, friendship, and social acceptance are the subject of Wreck and Ruin as the heroine faces what it means to be a stranger in a strange land after being in a shipwreck off the coast of England.

Early in 2017 (hopefully, January) All She Loves will be released. It is in the hands of the first editor, now. All She Loves is about revenge, facing tragedy, and moving on with your life--themes that we all have to face at times during our own lives. Elspeth plans go awry when she investigates the death of her best friend and finds herself losing her heart to an earl.

That's all for now--hope I didn't make too many typos!