Honeymoon with Death is released

The books don't have to be read in order, but That is the "proper order" for those interested.

Since I'm snowed in at the moment and am suffering from writer's block with the book I'm currently writing, I figured now would be a good time to tell everyone about the book. 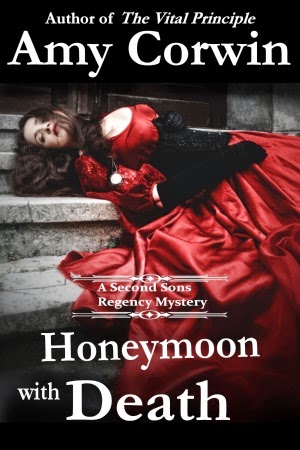 On their honeymoon trip through Europe, Prudence and Knighton Gaunt take a brief excursion to see the triple falls on the river Velino on their way to Rome, little knowing the chain of events this will precipitate.

The couple sends their own carriage and servants on to Rome to reserve rooms and joins a small group of travelers in a hired coach. Unfortunately, before the group reaches the triple cascade, their carriage breaks down on a remote road. A band of ruffians ambushes them, and their only safety seems to lie in a ramshackle, old inn reputed to be haunted.

The party of travelers spends one night only to discover one of their group dead the next morning. The body lies in a ravine near the area where they were attacked, casting suspicion on the bandits.

But why had the passenger returned to such a dangerous spot in the middle of the night, and why was the victim wearing another traveler’s cloak?

As Knighton and Pru investigate, they discover the other travelers were not all the strangers they seemed to be. Mistaken identity, revenge, envy, and frustrated love vie as motives, and Knighton is pushed to desperation when Pru disappears as well. He must use every ounce of logic and intelligence to find her—and identify the killer--before there is another death on the road to Rome.

In this excerpt, the carriage Pru, Knighton, and several other passengers are riding within suffers a terrifying accident on a treacherous mountain road. None of them realize that their difficulties are only the start of even more trouble.

A loud crack shuddered through the coach. The vehicle lurched to the right and then tilted abruptly. Pru would have fallen to the floor if she had not caught her husband’s strong, outstretched hand. Mrs. Ruberry was thrown forward and only the lieutenant’s outstretched hands kept her from landing in his lap.

Through the open windows next to Pru, a terrifying view of a mountainside scattered with sharp rocks, ravines, and dark pine trees slanted down toward a misty valley below. It was a dizzying and frightening sight as they teetered on the very edge of a long drop down to scattered boulders and rubble.

“I’m falling!” Miss Demaretti screamed as she cast a frightened glance out Pru’s window and threw her arms around Mrs. Ruberry. “We must escape, Violet, the carriage is slipping—I can feel us falling!”

“No one is going to fall,” Knighton said curtly as he fumbled with the carriage’s only door next to Pru.

When he opened it, the door swung out loosely over the abyss, showing only a narrow edge of the road immediately under the carriage. A bare six inches of ground lay between them and disaster.
Pru hooked her right arm through the window to keep from falling out and held on to Mrs. Ruberry’s shoulder with her left. “Is there any room to climb out?” Her voice sounded breathless, and she sucked in a sharp gasp when there was another crack.

Her breath caught in her throat. The carriage tilted alarmingly toward the ravine, top-heavy as it was with baggage. She could hear thumps and slithering from the roof as the two men who had been forced to rid atop due to the already overcrowded interior scrambled to hold on.

“Yes,” her husband grunted as he caught the edge of the door for support before leaning out a few inches. “There is just enough room if we are careful. You men, shift your weight toward the opposite side when I climb out. I will assist the ladies to exit first.” He glanced apologetically at Pru.

She nodded quickly, knowing what he needed from her. “I’ll help Miss Demaretti and Mrs. Ruberry and then follow them.”

Knighton depended upon her to keep her head and help the others. If only she felt as calm as he sounded. She turned her head away from the window, ignoring the pull of the terrifying ravine. Her weight, combined with that of the other men, would provide stabilization while Miss Demaretti and the somewhat portly Mrs. Ruberry scrambled out.

The carriage shook. Rocks cascaded down the mountainside, dislodged by the carriage. The coachman spoke sharply to the horses in an attempt to control the frightened animals. Every movement made the coach shudder and created another cascade of rubble.

Knighton as he climbed out and clung to the door and coach fender. The two other men quickly slid toward the opposite side as the conveyance trembled and groaned.

A few rocks from the verge rolled over the edge, clicking and rattling their way down the hill. The noise went on and on, and they all froze, listening with tense faces until the sounds of the tumbling stones faded away.

“Come, Miss Demaretti, you must go first.” Pru stretched her arm across the trembling body of Mrs. Ruberry to catch hold of Miss Demaretti’s wrist.

“Careful!” Mrs. Ruberry’s shrill voice cut through the tension, immobilizing the others in the coach.

“You’ll send us all down the mountain to our deaths!” She twisted as if to push her way past Pru’s arm, but when she caught her glance, the older woman thrust her hand against her charge’s back and literally pushed her toward the door.

“Excuse me, Miss,” Captain Marshall said apologetically as he braced Miss Demaretti with his hands around her waist and lifted her through the door. He held on to her until Knighton caught her and eased her around the rear of the coach to the road.

The conveyance swayed as the weight shifted, and another shower of stones bounced over the side.
In a state of panic, Mrs. Ruberry climbed past Pru, elbowing her aside and nearly kicking her in the face in her haste to follow the girl out. Knighton caught her and ignored her wild words as he swung her around the fender and pushed her onto the road next to Miss Demaretti.

Without the plump woman’s weight, the coach wallowed and lurched, sending more and more rocks down into the ravine. The narrow edge of the road crumbled under the broken wheel. The coach leaned further over the ravine. The horses, restive and terrified by the sounds, snorted and whinnied, jerking the conveyance even more, despite the driver’s attempts to calm them and keep the vehicle stable.

Pru squeezed her eyes shut. Despite her efforts to remain calm, her mind feverishly flashed terrifying images of the coach tilting over the edge. Tumbling and crashing against the rocks, they would be smashed into pieces and scattered over the scree at the base, like so many crushed porcelain dolls amidst the wooden debris of the coach. She clutched one of the leather straps as the conveyance shifted again.