Just got back from the wonderful writers and readers conference, Malice Domestic, held in Silver Spring, MD. What a great conference--lots of fun--and a lot of wonderful writers to meet and discover. I didn't do any sessions this year, I went strictly as a reader, but I sure attended a lot of interesting sessions about mysteries, such as police procedurals, British historical mysteries, and even humor in mysteries. That last one, humor in mysteries, featured a moderator I couldn't wait to meet: Kathryn Leigh Scott. For those who find the name oddly familiar, well, she played Maggie Evans/Josette in the original Dark Shadows.

Although I've meet a lot of famous authors or famous people, there are only two who ever meant something to me.

Back in the 80's, I was wandering around the gardens behind the Governor's Palace in historic Williamsburg when low and behold, I saw someone I instantly recognized: Isaac Asimov. I couldn't believe it. I was so amazed and in awe that about all I could do was to introduce myself and mumble, "I've read every book you've ever written!" He was so kind and gracious, even though I'm sure the last thing he wanted was to be accosted while trying to enjoy the formal gardens. To this day, I wish I had had my wits about me and had taken his picture.

For years, I felt he was the only meaningful famous person I'd ever met.
Until the Malice Domestic conference.

I attended the session on humor in mysteries specifically because I saw that Kathryn Leigh Scott was to be the moderator.  And I wasn't disappointed. It was a great session and even better, I got to listen to "Maggie Evan's" lovely voice again. 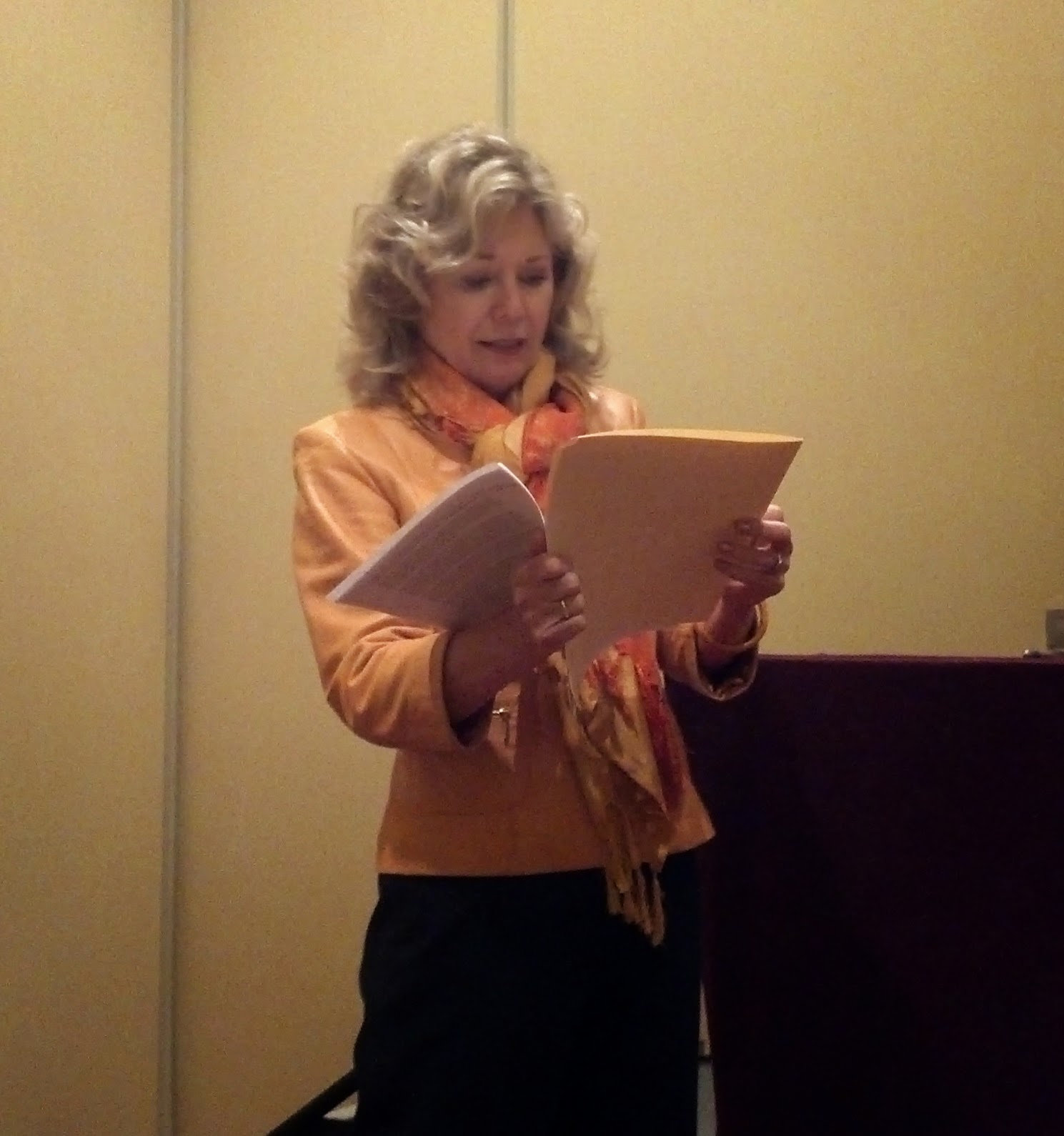 Despite all the years since Dark Shadows was on the air, she hasn't really changed. She's still just as beautiful as she was as Maggie Evans, although her hair is a bit lighter (her picture is on the right). And what was really interesting was that Kathryn Leigh Scott was just as warm and kind as her character had been all those years ago. What a nice lady.

The other authors seemed like a lot of fun, too, and I had to laugh when one of them, in talking about how she includes humorous elements, mentioned an incident that had happened to her in real life. Seems she was vacationing in a a remote cabin in the woods when a snake dropped down from the ceiling to land next to her. Surprise, surprise.

I didn't raise my hand, but I could top that story. I live in a log home every day and can't tell you how many snakes I've had to remove. Thank goodness my husband has snake tongs. Rat snakes, particularly young ones, love to climb and seem to particularly love log homes and cabins. I suspect that that is what dropped in on the author.

A few years back, I got up early to go to work and glanced over at my sewing machine in the corner of my bedroom. After one look, I shook my husband's shoulder to wake him up.

"Sorry to wake you, honey, but there's a snake trying to use my sewing machine. Can you remove it? I have to take a shower and get to work," I said.

You see, I didn't want the snake to escape, hide in the house, and then later show up in some inconvenient place. Like our bed.

And then there was the cow I found munching the grass around our mailbox. And the barracuda in the middle of our road, sixty miles inland from the coast.

People have no idea what it's like to live in the country. 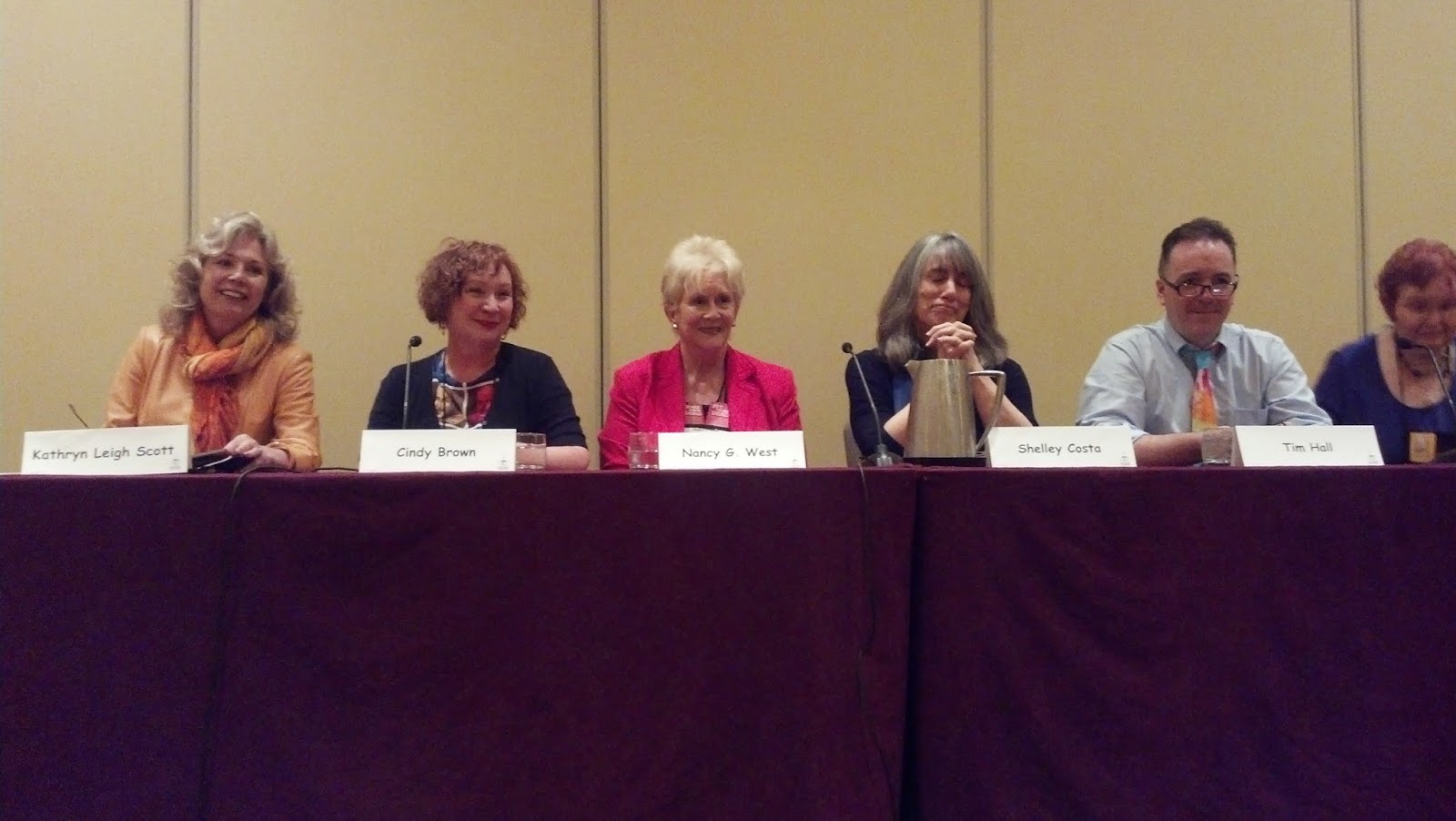 Anyway, after the Malice Domestic session (picture on the left), I got on my Kindle and bought the first book in a series Kathryn L. Scott is writing (the Jinx series). The first book is called Down and Out in Beverly Heels and I enjoyed it a great deal--I read it in two days. While most of it is written in present tense, I forced myself to overlook that (I loathe present tense--it throws me right out of the story) and I enjoyed the story about a mature actress struggling to get her career and life back on track after her husband takes her for everything she's got and then disappears.

Ouch. I can only hope Kathryn wasn't writing from personal experience. :)

Although the mystery is less of a who-done-it than a humorous, caper story where the hapless heroine tries to find her husband to see if he's really alive or dead. A few people die along the way and the ending has a nice surprise, so it does have mystery elements. Above all, it works, at least it did for me.

So...the conference was a lot of fun and I highly recommend it to mystery readers and writers. It's not too big and a lot of really interesting people usually show up.
Posted by Amy at 7:24 PM No comments: