Wreck and Ruin, a new release from Scarsdale Publishing

New Release and So Much More

I've got so much to share with you that I hardly know where to begin! It's almost the end of summer, and I hope you are enjoying the season. I've been busy kayaking with my Parson terrier, Daisy, to escape the heat, and there have been a couple of sea turtles, one definitely a loggerhead, hanging out in the bay where we paddle around. Daisy goes nuts barking (What are those things swimming around next to use, Mom?) when a turtle pops its head up, but the turtles aren't impressed and just go back under the waves. (Don't worry--Daisy has her own life jacket that she wears. She was too vain to wear it in this picture.)
Not only has Daisy been accompanying me kayaking, but she's been standing guard at night when I take my telescope out to view the stars, galaxies, and nebula. It is truly awesome (in the REAL sense of inspiring awe) to see what is going on out there in space. Stars are being formed while others are going super-nova; galaxies are absorbing other galaxies; it is just incredible. 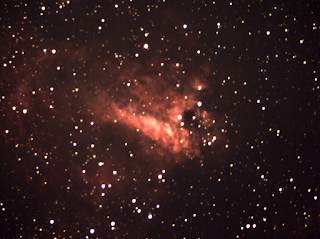 I've even been capturing images such as the one above of M17 - The Omega Nebula (or some call it The Swan Nebula). So I've been burning the candle at both ends, writing and kayaking during the day and studying the stars at night.
But on to more the real reason for this blog...

Despite the enervating heat, there has been a lot going on since I signed several contracts with Scarsdale Publishing. Wreck and Ruin is out!

Scarsdale Publishing has released my novel as part of their Regency Rendezvous series. I had a lot of fun writing about an heiress from the USA who travels to London, hoping to take Society by storm only to lose everything in a wreck off the coast of England. Unfortunately, being the sole survivor seems to be the least of her worries when she meets to master of Blackrock, a man who may--or may not--be responsible for the wreck.

Wreck and Ruin is filled with a bit of romance, a dash of mystery, and a pinch of humor, so I hope you'll enjoy it!

Wreck and Ruin on Amazon:

Just a few hints about what the future may bring. Scarsdale Publishing has contracted me to write John Archer and Lady Victoria's story, so that should come out in late 2017 or early 2018. Some of you have asked about their story in the past, so I'm really pleased to say that the rough draft has already been completed and editing is about to begin.

After that, a trio of stories featuring the Stainton sisters will come out, followed by a book featuring an inconvenient marriage that may not be so inconvenient, after all. All of those will be published by Scarsdale, which means I have a lot of deadlines and a lot of writing to do over the next few months.

Audible Books
My agent has sold my Archer family series to Audible, so there are now audio versions available. Audible is currently running a contest to give away some copies (CDs) so if you are interested (and I hope you are) you can enter the contest simply by tweeting. Follow @HershmanRights and then like and retweet the post about the giveaway in order to enter. The giveaway ends on August 11, so be sure to enter soon!

That's all for now.
Enjoy the rest of the summer season!
Sincerely,
Amy Corwin
Posted by Amy at 2:24 PM No comments: