I'm absolutely thrilled to have Rosemary and Larry Mild visit my blog today. They've written some terrific mysteries set in Hawaii and ever since I saw Hawaii Five-0 and Magnum, P.I., I've loved mysteries set in the islands. I've had one trip to Hawaii and didn't spend nearly enough time there and I sincerely hope to visit again.

A Murder in the Family
By Rosemary and Larry Mild 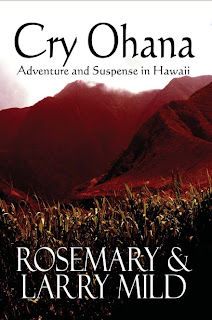 We work at dueling computers in our home office in Severna Park, Maryland. But only seven months of the year. During the winter, we write back-to-back in our Honolulu apartment, on the island of Oahu. We just published our fourth novel: Cry Ohana, Adventure and Suspense in Hawaii. Murder, extortion and passion thrust a Hawaiian family (ohana) into the tentacles of Honolulu’s dark side. “Death of a Rainbow,” the first chapter, opens with a picnic at a waterfront park. A rainbow arcs overhead, but breaks up, foretelling a succession of tragic events.


In lieu of giving readers a Cry Ohana cover blurb, the Pualoa children choose to tell the story from their own points of view. Had they known of blogging, this is what they’d have to say.


My name is Kekoa, Kekoa Pualoa, and I’m a Hawaiian teenager, the main character in Cry Ohana. Ohana means “family” in Hawaiian. My story is all about family—how I lost it and my search to regain what’s left of it. I’m supposedly descended from the alii, Hawaiian royalty.


As an island group in the middle of the Pacific Ocean, Hawaii is the most isolated place on earth from any mainland. That’s why we’re so into family and aloha closeness. Kekoa means “warrior” or “fearless one.” Oh, you needn’t worry—I speak plenty good English with an occasional Hawaiian or pidgin word tossed in like a jalapeno for flavor. I’m tall for my age, thin, gangly, with sun-dark island looks, and dark hair that just won’t behave.


The Milds’ story plot leaves me without a mother or father before the age of two. My grandmother, Tutu Eme, takes care of my older sister, Leilani, and me for the next eleven years. Then bad things happen. Man, you wouldn’t believe how bad. They all begin when I witness the bludgeoning murder of my uncle—my dad’s brother, Big John Pualoa. The killer knows I saw him and he wants to silence me. You know what that means. I’m on the run from him throughout the story. My friends, other kids, they’ve all got a life: school, girls, skate boarding, fishing, the beach and boogey boards. I’m caught in the tentacles of a giant squid— Honolulu’s dark side, I mean, squeezed in and out of harm’s way.


I’m thrown into a number of diverse cultures—Chinese, Japanese, Filipino, Korean and hauoli (Caucasian). Luckily, I get to make some pretty exciting friends: homeless Ol’ Chou and Mrs. Raggs; Andy Ballesteros and his sweet sister Maria; Sam and Mauro Osaka; the mysterious Hal; and my Black Lab, Ilio (“dog”).


I’m itching to tell you the whole story, but the Milds won’t let me—especially who wins the courthouse shootout. They threaten to take away my loco moco if I do. That’s two sunny-side-up eggs on top of a huge hamburger amid a whole plateful of white sticky rice, all immersed in dark brown gravy. Yum!


I’m called Leilani, “heavenly one” in Hawaiian. Not only has Kekoa disappeared. Uncle Big John went missing around the same time. We’ve tried everything to find them, even calling the police twice, right up until Tutu Eme died a year ago. I was sixteen and alone, so I was forced to live with a foster family, the Wongs. Paul and Masako Wong are teachers at a private school where I go now. Bummer! I mean, it’s okay, but I miss my own high school friends. Numi Wong is my age and wants me to be the sister she never had. Her gorgeous hunk of a brother, Alex, wouldn’t give me the time of day when I first moved in. Now—well, things have sort of happened.


I have an oval face with large brown eyes and shoulder-length dark hair. I’d be considered beautiful if I just could lose a skosh of my roundness. I have a hair-trigger temper and am totally outspoken on Hawaiian issues. Don’t get me started. I miss my brother terribly. Will I ever see him again? And where is our dad? I think he’s abandoned us. I wonder if I’ll ever find the love I need. I can’t tell you any of that or Rosemary might cut off my supply of mochi, a sweet rice dessert.


I’m grateful to Rosemary and Larry for their efforts to portray the struggles of our Hawaiian people, the loss of our precious kingdom, our heritage, our ways, and the importance of maintaining the aloha spirit. After all, Hawaii is the melting pot of the Pacific. I’m a budding artist—talented, I’m told. My dream is to create huge paintings of my Hawaii. And become famous, of course.

* * *
A review of Cry Ohana by Tanzey Cutter in Fresh Fiction for Today’s Reader says: “I loved this story! The authors write with such eloquent detail, you can almost feel the island breezes and see the breathtaking scenery. I’ve been to Hawaii numerous times and lived there as a child, so I was familiar with the places described. This is an uplifting story of family and love, as well as an extremely suspenseful novel with a very satisfying ending.”


How can we write about Hawaii with such authenticity? Honolulu is our second home so we can spend time with our daughter, Chinese son-in-law, and two college-bound granddaughters. They live deep in a rain-forest valley behind Diamond Head. Huge mango and avocado trees surround their house. They have to be quick about snatching the ripe fruits off the ground. Otherwise, the feral pigs get there first in the middle of the night.


How does the actual writing process work? Rosemary says: “Larry conjures up our plots and writes the first draft. Then it’s my turn. I breathe life into the characters, intensify scenes, sharpen the dialogue. Sometimes I throw a new trait into a character. In Cry Ohana, Larry created a gentle, no-stress romance for Leilani and Alex. But I’m a combative sort, so I made her feisty to give her scenes more conflict. Of course, changing a character has consequences; it can actually derail the plotline, so I have to watch out.”


Then, with sleeves rolled up, we “negotiate.” Here’s our typical scenario.


Larry: But it took me hours to create those metaphors.


Rosemary: It’s too much already. Less is more.


Larry: Talk about overdoing. Your description of Mrs. Raggs goes on for a whole page and she’s just a walk-on.


Our jousting is short lived. We resign ourselves to the compromises required. Maalox helps, too. We relish the writing process, but we have to take Stephen King’s advice: “To write is human. To edit is divine.” And Harlan Coben agrees: “If someone tells me he doesn’t rewrite I don’t want to party with him.”


In 2001 we introduced our mystery series with Paco LeSoto, a dapper retired detective, and Molly Mesta, an eccentric housekeeper/cook. Molly whips up the English language in her own special stew that the authors call “Mollyprops.” She’ll criticize a villain for his “defecation of character.”


In Locks and Cream Cheese, mayhem erupts in a mansion on the Chesapeake Bay. Hidden rooms, locked doors and dead bodies embroil Black Rain Corners in scandal. Paco and Molly expose the mansion’s lurid secrets—and fall in love. (Available in paperback and on Kindle and Nook)


In Hot Grudge Sunday, Paco and Molly are married. They’d rather smooch than sleuth. But conspirators and thieves derail their honeymoon bus trip out West. Not even the Grand Canyon can suppress the out-of-control passions and quest to kill. (Available in paperback and on Kindle and Nook.)


Boston Scream Pie returns readers to historic Annapolis and southern Maryland. Young Caitlin Neuman hires the sleuths to decipher her nightmares of a lethal car crash. They lead to a harrowing tale of twins and two families plagued with jealousy, hatred—and murder. (Available in paperback.)

* * *
Rosemary reports: At Left Coast Crime on the Big Island in 2008, we took part in a panel and I confessed: “Larry and I work at different speeds. I’m the tortoise.”


Larry chimed in: “There isn’t a hare of truth to that.”


The night we met, on a blind date, he slipped a pun or two into our dinner conversation. I retorted, “I bet you pun in your sleep.”


“Sure,” he said. “I was born in the Year of the Pun. That’s the thirteenth sign of the Zaniac.”


His puns still make me laugh. I’m pretty sure our marriage depends on it.


Visit us at http://www.magicile.com/. E-mail us at roselarry@magicile.com to buy autographed copies from us at big discounts.

This sounds great... and it would make a great gift for my lovely Hawaiian friend. :)

I found your blog through a review by Susan at Lovez 2 Read... and will be back to read more!

Hi Jan--
I appreciate you stopping by and leaving a comment. I just loved hearing about Hawaii and I'm glad to see you enjoyed it, too.