Release Day: A Fall of Silver

A Fall of Silver has finally been released! 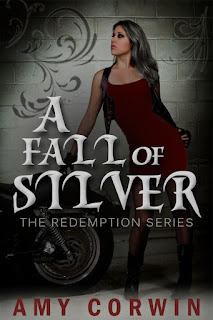 My paranormal romance (or urban fantasy, since it's a bit of both) is out and here is the blurb and a small excerpt to whet your appetite.


Their secrets are about to catch up with them.
The only good vampire is a dead vampire: that’s Quicksilver’s philosophy and she sees no reason to change it. In fact, she’s about to kill one of the undead when Kethan Hilliard confronts her, promising peace and redemption for both vampires and humans in exchange for an end to the slaughter.

But Quicksilver knows that’s not going to happen.

Someone is killing humans and vampires, and sweet words aren’t going to end the nightmare.

The events awaken terrible secrets from Quicksilver’s past, and she’s not about to repeat her previous mistakes. This time, she’s going to end the madness and silence the horror, forever.


“Stop!” A seated man commanded in a deep voice. Pressing his fists against the table, he stood, unfolding until he towered over the other men in the room.

Quicksilver's gaze flicked over him. Stubborn chin, wide mouth, and dark, brooding eyes. An unfamiliar response curled in her belly, reacting to his presence. A feeling she didn’t need, or want, warmed her. She slowed.

Nerves. Don’t let them distract you.

She shifted, orienting again on Jason. As she raised a whip, her glance flickered once more to the tall man. She took a deep breath and forced herself to concentrate. The vampire was dangerous. Leave the humans for last.

“Don’t move, please.” He stepped in front of the three vampires flowing around the table to join Jason. Frowning, he lifted his hand in a gesture of command. “None of you move.”

The vampires froze. Even Jason stilled himself. Shocked, she barely noticed her whip sagging to the floor in an almost instinctive response to the large man’s order. She straightened and tensed her wrist, flicking the whip in her right hand.

The thin, silver lash uncoiled through the air and encircled Jason’s neck. He stared at her, his pale eyes widening with terror. His golden lashes fluttered as his hands hovered around his neck.

“Don’t, please!” Jason’s fingers pressed against his collarbone as if he thought he could hold his head in place. His frantic gaze flashed to one of the vampires. “Stop her! You’re my clan leader, Sutton. For God’s sake, do something! Help me!”

In a burst of unexpected speed, the big man moved around the table. He gripped the lash.

Lose your hand if you love vampires so much! She bared her teeth in a wolfish smile. When he didn’t let go, she shifted her weight to her back leg and prepared to tighten the noose.

“Stop. Now!” The man—and he was a human male judging by the spicy warm scent of his skin—tightened his hand when she gave the whip a small tug. A trickle of blood seeped through his fingers. He did not react.

A small curl of fear tightened her belly.

The other human half stood. “Kethan—”

“No, he’s dangerous. He’s a vampire, and he almost killed a young girl.” If he didn’t let go, he’d lose half his hand. She stiffened in preparation.

“It was a mistake. Wasn’t it, Jason?” the large man, Kethan, asked.

“I never touched her, honest!” Jason’s voice rose sharply. “I wasn’t going to kill her—”

“Enough talk!” she replied in clipped words, edging around to get a clear view of Jason.

“It is enough.” Kethan said calmly, keeping his eyes locked on her face. “You’re interrupting negotiations—”

“Negotiations? What negotiations? You can’t negotiate with vampires! Or don’t you know what they are?” Blood pounded in her temples, deafening her as her fury thrust her into the past.

She’d tried negotiating with Carlos and Carol, once. The two vampires played her like a Stradivarius, promising escape and then…. She swallowed, forcing the pain back.

When she glanced up, his dark eyes caught her gaze. She didn’t notice his body tense until it was too late.

He grabbed her wrist in a single, smooth movement, catching her off guard. The warm, human strength of his hand enveloping hers surprised her, delaying her recognition of the unrelenting strength of his grip.

“What are you doing?” She jerked her arm, but he didn’t release her. Instead, he  pried the whip handle out of her hand. Then his brown eyes caught her gaze again and held it with the intensity of a master vampire.

Her eyelids fluttered in an attempt to break the connection. She wanted to look away, she had to, but couldn’t force herself to look away. After a breathless moment, she stepped back. Her left hand tightened on her second whip. She had a spare—a third whip—and she wouldn’t be caught by surprise again.

He couldn’t control her. No one could. Never again.

--I hope that small excerpt intrigues you. If you're interested, A Fall of Silver is available as an ebook through Amazon and Smashwords.
Amazon Kindle/Fire: http://www.amazon.com/dp/B00B6EZBAS
Smashwords (Most ebook formats): https://www.smashwords.com/books/view/279463

Congrats on the new release. Best of luck.