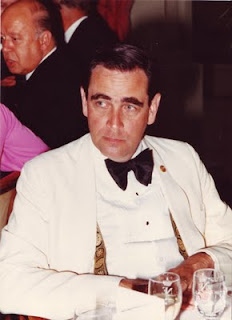 Vintage Murder - Real or Research?
A Look Behind the Scenes
William S. Shepard, http://www.diplomaticmysteries.com/
The first book in my series of Diplomatic Mysteries is Vintage Murder (http://tinyurl.com/3unnas5 ). It is set largely in Bordeaux, where I lived for several years, and in Paris. Much of the detail depends upon my research and memory of the days that I lived there, as Consul General.
Here are some examples, The meetings described in the book that take place at the Embassy in Paris are quite genuine in tone, and mirror actual meetings of American diplomats who were assigned to diplomatic missions around France. The Bordeaux vineyards are also real, and most of them (except where blackmailing episodes take place) are amongst the most famous and pricey wine estates of that storied region. So, unfortunately, are the activities of the Basque ETA, a terrorist organization whose stated purpose is Basque nationhood.
My idea was to combine these elements. Now, fortunately, the ETA seems exhausted (although we have seen that before), and its fortunes at a low ebb. But what if they were to revive, motivated by the desire to be a real player, with large sums of money at their disposal rather than the small amounts of “taxes” which they extort from local Basque businessmen? That led me to the creation of my first character, a young Basque of keen intelligence and a burning desire for revenge. Here I inserted into his background an actual event, the formation of paramilitary hit squads by Spanish authorities, who crossed the border and carried out murders in France. Unfortunately, they fairly often hit the wrong targets and murdered innocent people. That was the case with the father of my main Basque character. (I don’t like cardboard villains very much. I like to understand their motivation and to the extent possible, make them three dimensional.) 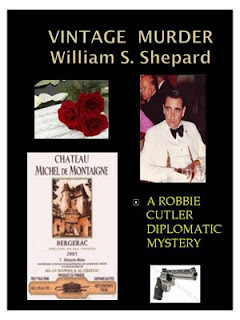 Having invented this character, I had the idea of having him be a keen student. Why not have him with an American MBA? That would do several things – he would think of the ETA terrorists as a group with a failing business model. To have any chance of success (specifically, liberating the hundreds of their members in prison) they would need a great deal of money and weapons. And there, in Bordeaux, just a few hours away from the coastline, are world famous vineyards, some bottles of which sell for enormous prices. It would be a tempting blackmail prospect.
My American diplomat, Robbie Cutler, is the Consul at the same mission where I served. He surely knows some of the same people, and of course is enjoying their wines! But when he is contacted by a wine estate owner who claims that he is being blackmailed, the action takes an official turn for Cutler. Add to that the sign paingted on the door of the American Consulate General, “Death to the American Consul,” signed by the ETA!

Robbie is on his second assignment. His father was also a career diplomat, so living overseas is natural for Robbie. He has long since paid all of his official calls, so that when help is needed, he already knows the key players in the French police and intelligence services. He also has that rare quality that Napoleon is said to have demanded of his generals – he is lucky! And luck is presented in the person of the beautiful Sylvie Marceau, a features newspaper writer for the local regional newspaper, Sudouest. He is logical she is intuitive. She also discovers the first wine estate owner to be murdered by the ETA!

Robbie and Sylvie ramble through the most famous vineyards of Bordeaux, in St. Emilion, Pomerol, and the Médoc, where they attend a reception at storied Château Margaux. Their detection becomes a love story, and on a visit to Bordeaux, Robbie’s sister Evalyn tells her brother that now he is the lucky one – Sylvie is far too good for the likes of him!


Since this is the first book of a series, Robbie Cutler and Sylvie Marceau become continuing characters, as do several of their diplomatic colleagues. Cutler is reassigned from Bordeaux to Budapest at the end of Vintage Murder, during the second book in the series, Murder On The Danube, but he and Sylvie keep in touch, and become engaged. Their honeymoon, in Murder In Dordogne, gives Sylvie a chance to play detective as well, and she solves a murder plot of which her husband was totally unaware! Finally, the American Ambassador in Paris in Vintage Murder is so well connected politically that at the start of the fourth book in the series, The Saladin Affair, he is named Secretary of State, and Robbie becomes his Special Assistant, responsible for planning his trips overseas. Here his diplomatic duties are compounded by a murder investigation, and the repeated attempts of Al Qaida to murder the Secretary of State. 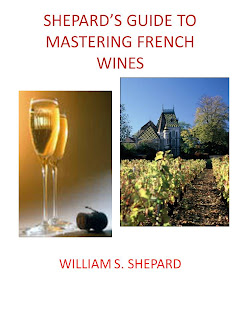 My Kindle book on French wines, revised and enlarged for this 2011 edition, introduces you to the wines and wine regions of France. With dozens of hyperlinks, the reader can click back and forth between the book and the actual websites of the great regions of Champagne, Bordeaux, and Burgundy. The 2009 and 2010 vintages are assessed, and there are many tips on quality wines that are reasonable priced. For the cost of a single glass of wine, here is your well-researched guide to the pleasures of French wines. Read this, and you’ll wonder why you ever relied on a point score rather than your own good taste!

* * * * *
Thank you so much! My husband and I are just starting our efforts to learn about wine, so this was wonderfully serendipity to get a blog about this fascinating topic. We can't wait to learn more, and I, personally, can't resist a mystery with such an interesting premise as Vintage Murders.

William, your novel sounds intoxicating! You certainly have a fascinating background. I enjoyed reading your post.

Wishing you great success with your novel,

Thanks for the comment, Jacqueline! It's always good to hear from folks.

William Shepard has done a fantastic job weaving an exciting story and enhancing my wine knowledge. I raise a glass to you, William.

I have to agree, Kathleen. And thanks for stopping by!

I have to agree, Kathleen. And thanks for stopping by!