Herpetology for Idiots,
or “What the heck is that?”


Let me tell you a little story. It starts about 2:00AM Saturday morning when, for reasons best known only to himself, my husband decided to go around the house turning off our air conditioning units (we don’t have central air). So around 3:00AM I woke up stuck to the sheets in a pool of sweat. The bedroom had taken on the atmosphere of a Louisiana swamp in mid-summer, so I got up and went downstairs. I turned on the air conditioning unit in the living room and settled down on the sofa, thinking I’ll get a little sleep.

Crash—boom—crash! I heard the sounds of smashing glass, coming from the other room. Now, it’s getting close to 4:00AM and instead of operating at my normal, peak brain efficiency of 50%, my mind was working at about 7.5% efficiency. But I figured the cats were knocking things off the kitchen counter again. They like to push stuff off and watch it shatter and roll around the floor. It amuses them.

So I tottered out towards the kitchen, but on my way, I noticed a lot of smashed crystal on the floor, in the dining room. The broken glass was almost directly below a little decorative shelf that runs along the ceiling where we keep nice, but seldom-used glassware.

A little rat snake peered down at me from the shelf, way above my head.

O-kay. Not the cats. All right, then.

I tried to rev up my brain, but it stuttered and stalled at about 3.2% running efficiency. The only things I could think of were:

Crash—boom—crash! Another load of glassware hit the floor, from just a little further along the shelf.
This time, I had the snake tongs. I saw the little rat snake’s face peering at me from the edge of the shelf. There were still some glasses it hadn't broken in front of it.

Another round of ponderous decisions, that ran along the lines of:

So, I clutched the snake with the tongs, remembering my husband’s warning that snake’s necks are fragile and you can easily crush them. It was a relief when the snake coiled around the tongs. I figured it would relieve the pressure on the neck. It wasn't a relief, though, when it started to stink (herp lovers will guess why, others needn’t worry about it) but I was glad I was holding it at the end of tongs and not in my hands.
Finally, I released it into the wilds, next to the front door. I swept up all the broken glassware. By this time, it was close to 5:00AM and too late to go to bed. So I also swept the rest of the house, ran the dishwasher and did a few other things. All of which my husband slept through.

By the time my husband woke up, it was all over except for the screaming, and I was too tired for that. His first question when I told him about it was, “Did it look fat? Maybe it ate the mice.”

Anyway after I disappointed him, my husband did educate me. Apparently, rat snakes are largely arboreal and like to live in trees, eating baby birds, baby squirrels and whatnot. Since we live in a log home, the snake probably mistook the place for a really peculiar tree. I'm sure there were plenty of good things to eat, too. Things that I'm glad I know nothing about. 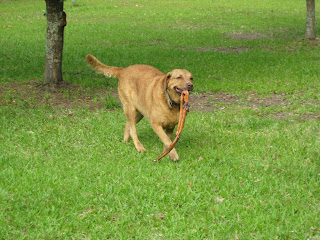 Oh, and then, our Chesapeake retriever, Molly, got bit by yet another copperhead last night and now she has a fine goiter. My husband did take care of that problem, with extreme prejudice. But that’s another story.

(Molly is doing fine, by the way. And she’s very proud of herself. And she took out her bad feelings on another hapless snake that we weren't quick enough to rescue.)

Call me weird, but I like snakes. My husband, however, does not. And most likely our cat would just ignore a snake. She's too easily distracted anyway. :-)

You're not weird. A lot of people like snakes. In fact, some folks keep them as pets. That's not for me, I prefer dogs, cats, mice, hamsters, and maybe a few other reptiles like lizards, frogs and turtles. Just never got "into" snakes, though.

ACCCKKKKKK! I'd have moved out of the house and burned it down! No snakes for me! Loved the post, how funny!

Well, about a year ago, I found a baby rat snake crawling through my lower cupboard. So I had to pull out all the stuff from the cupboard and wash it. So I definitely understand what you mean.
And I keep wondering if this is the same rat snake who keeps showing up in our house. About 5 months ago, we found one trying to use my sewing machine. Sadly, he forgot that you need to turn it on to use it.
Anyway, my husband took that one outside.
We keep taking them outside and releasing them, and they just keep showing up again inside the house. LOL
Or maybe it's just the same, persistant one.

You are a far far braver person than I am! I am so glad I don't live where you do.
I enjoyed your witty storytelling. : )
Glad the dog's okay. Whew.

I have a mouse/rat problem too. My insane beast of a cat brings them in. My dog kills them when I scream. Which, I would have done when I saw the snake. But, my husband isn't much of a snake catcher or killer. He would have broken the rest of my glassware. As for me, I don't catch and release when it comes to snakes. I kill first and ask questions later because I never know where a live snake my slither off to. I know where a dead snake is!
Oh, did I mention the fact that I HATE snakes. Although, when I was younger, my grandmother would kill them to keep them away from her chicken eggs. She would then hang the bodies in a tree so it would rain.(yes, that's an old wive's tale.) Then, my cousins and I would play with the headless bodies, pretending we were snake charmers in the circus. Guess that's when I decided I liked dead snakes better than live ones!

I wasn't aware of that superstition--thanks for sharing it. I don't know why these things fascinate me, but they do.
:)