Please welcome Dara England! I had the temerity to ask her if she would write a blog after I found her books and downloaded every single one of the to my Kindle. I loved her writing and really wanted a chance to host her.

She graciously agreed, and not only that, she is sponsoring a contest. If you stop by and leave a comment here, Dara and I will pick a winner. You'll receive an ebook by Dara, and I'll tell you, if I hadn't already bought all her books, I'd be tempted to cheat and keep the book for myself.
So here she is!

Dara England
Many thanks to Amy for agreeing to have me as a guest on her lovely blog.

Something I’m often asked lately is why I’m pursuing indie publishing after having been previously published in more traditional forms. There’s no short answer to this so I’m going to go with a long one. That’s right, get comfy because this girl is going to share her entire publishing background, such as it is.

After years of writing fiction in the hope of getting published “someday” I finally got up the nerve to start submitting my work. Only to small webzines and print magazines no one had ever heard of but at least it was a start. Seeing my work up on the web and knowing other people were reading it was fun and it gave me confidence, as well as the chance to hone my skills.

But that wasn’t enough. It wasn’t the real dream, just the smallest taste of it. I learned about the possibilities opening up in the e-publishing world and, although the idea of e-books took some getting used to at first, decided to give it a try. I submitted to a number of digital first presses and was eventually picked up by an up and coming small press called Lyrical Press Inc.

I still knew very little about the small press world and hadn’t had the sense to do much research before submitting. But I got lucky this time and LPI turned out to be a great first home for me and my books. They were professional, easy to work with, paid on time, and I didn’t have to deal with any of the nightmares it’s so easy for a first-timer to get sucked into.

But my dream was still traditional publication. Or legacy publishing. Or New York publication. It goes by many different names but you know what I mean. I wanted to see my books in stores and libraries. So when I heard of an opportunity to submit for a Running Press anthology, I jumped at it. And shockingly, at least to me, they wanted my story!

My experience with this second publication was a good one and seeing the Mammoth Book of Irish Romance in bookstores everywhere was beyond awesome. Whenever I stumbled across it someplace new I’d stop and pick up a copy and hug it. Or just stroke the cover. Let’s just say I probably looked like a crazy person to all the bookstore employees and the shoppers around me.

The Depths Of Despair

But New York, alas, still didn’t throw it’s gates open wide for me. I wrote a new book, sent it on the agent rounds and got a lot of interest. One agent even agreed to send me a contract but shortly thereafter her agency closed its doors and I was left still unrepresented. I was tired and frustrated at the endless rounds of queries, submissions, partials, fulls, rejections… Everywhere I went agents and editors talked about the tough market and all our communications ended the same way. They just weren’t confident enough that they could sell my book.

I returned to publishing with digital first presses but I kept an ear to the wind. And about this time I began to hear whispers of the potential for success in the self-publishing arena. Well, this was nothing new. I’d been hearing this kind of talk for years and had always dismissed it as nonsense. Everybody knew what self-publishing was, right? Just hand-selling a few copies of your little book to family and friends and anybody else you could beg or guilt into buying a copy. Self-publishers were largely derided and I was one of the persecutors. Just call me the Biblical Saul/Paul.

What’s This Indie Thing About?

But then something changed. Several authors I knew began to come out and “admit” to trying their hands at self-publishing e-books. These were “real” authors, people whose business sense I respected. They were New York published, for heaven’s sake! And yet, they were finding indie-publishing on the side lucrative. They kept their New York contracts and they continued to write for digital first publishers like Samhain Publishing, Ellora’s Cave, Carina Press, Spice Briefs, Red Sage, etc. But they were also finding time to put out some indie works and were reporting impressive sells numbers.

Cue inspirational music. This was the moment a light bulb went off over my head and I realized I could be building a reader base with indie publishing and pursuing New York at the same time. It wasn’t an either-or situation. What was more, thanks to the lower cost of producing an e-book versus a print book I could experiment with this whole indie thing at little expense.

Ok, I’d wised up and it was time to dip my toe into the water. I wrote something new, something I hadn’t tried before. A historical mystery novella set in Victorian England. I titled in Accomplished In Murder. I had always enjoyed detective stories but this was the first time I’d had the nerve to write one. Previously I had written things I thought would sell well, mostly paranormal romance. But it was time to break out and write something my heart was in, something I actually enjoyed for its own sake. 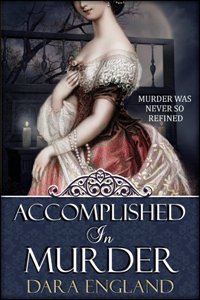 Thanks to my major obsession with hanging out on writers’ forums all these years I’d made a lot of connections with people involved in the publishing industry. I knew a number of formatters, editors, cover designers, etc. I hired Lauren Dee of Daisy Cakes Creative to edit my manuscript because she came highly recommend by other writers I trusted. Also she was reasonably priced and I didn’t have a huge budget. I lined up Lucinda Campbell of L.K. E-Book Formatting to format my e-book because I didn’t trust myself to do it properly and I was determined my first effort at an indie book would look professional.

With surprising ease, I uploaded my e-book to the usual venders and sat back expecting to watch the dismal numbers creep in at snail speed. Instead they…well, not exactly rushed in, but came in at a respectable and sedate pace. I had studied other’s statistics and was prepared for the long haul. I thought, “I’ll sell five copies the first month, ten copies the next, and wait for the snowball effect everybody talks about”. Instead, I easily surpassed my meager expectations on the first day my book was available for purchase.

At this moment, about a month out from my first indie release, I’m sitting in Amazon’s Top 100 list of best-sellers in the Historical Mystery Category. I’m also respectably situated on the Women Sleuths list. I have no idea how long this good fortune will last but I’m enjoying the ride.

As to the big question, will I be doing it again? Heck, yes!
Dara England
http://www.daraenglandauthor.com/


Murder was never so refined…

When her holiday on the coast of Cornwall takes a deadly turn, it is up to Drucilla Winterbourne to uncover the dangerous secrets the inhabitants of Blackridge House will do anything to conceal. But can a proper young lady from London society comprehend the dark motives of a killer?

Accomplished In Murder is the first in a series of historical mystery novellas featuring intrepid Victorian heroines up to their bustles in crime. These works are only loosely connected and can be read in any order.

Really enjoyed your post, Dara. I, too, have several books with small presses. Having received the rights back to a couple of them, I've been trying to figure out whether to go with another e-pub or branch out into indie, especially since the books have been previously edited. You make some interesting points to try the indie route. Thanks.

Hi Judi:
Thanks for stopping by! I totally support your idea to republish books you've gotten your rights back on. I've had a lot of success as a hybrid traditional & indie author, and ironically, my traditional books are selling better now, thanks in large part to my indie books. The lower price of the indie books seduces readers into picking them up, and then they go on to the traditionally published ones. It's kind of a nice synergy.
No matter what you choose, I hope you have tons of success!

Dara, congratulations to a great Indie start. I'm thinking of getting a couple of books out Indie this year too.

Hi Dara! Thank you so much for sharing your experience. It truly is a new Wild West period in publishing, isn't it? What I love about indie publishing is authors are in the driver's seat. :)

Hi! I'm glad to see you all dropping by! And I wish you all the best of luck regardless of whether you chose indie or traditional, or both!