The first day of NaNoWriMo is over!
Phew.
I wrote 2,014 words, roughly 8 double-spaced pages, last night on my WIP (work in progress) Hidden Aspects. It will be the third story in the Second Sons mystery series and features Prudence Barnard and Knighton Gaunt from the first book, The Vital Principle. 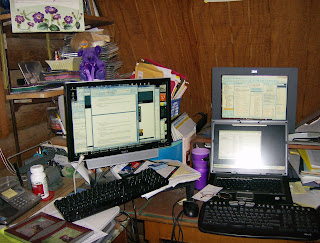 And while I'm constantly telling people, "If you want to be a writer, write," I haven't been so good at following that advice. My writing goes in spurts, in part due to necessity. I spend a few months writing a first draft, set that aside, and work on editing some other book. There are only so many hours in the day, and I have a day job, so when I'm writing, I'm writing. When I'm editing, I'm editing. Sigh.

However, what that has meant was that I'll go for long stretches without doing much in the way of new writing. Which is bad. Often, I'll learn a thing or two while industriously writing during NaNoWriMo, but instead of continuing to write when the book is done and cementing what I've learned, I go back to another book and start editing it. Not good. Must rethink. 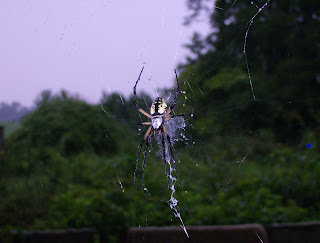 And on a side note, even spiders write. In fact here is a writing spider. Isn't he pretty?

I've been doing so much editing recently that my mind has gone into hibernation on the creativity front. In fact, I was starting to worry that after I manage to write the next three or four books that I have ideas for, I may run out of creative juice.

Which brings me back to NaNoWriMo and why writers must write. Constantly.
Because last night, not only did I get those 2,014 words written, but I got a bunch of side benefits!
So you see? The more you write, the more your skills improve and the more you tap into your hidden well of creativity.

If you want to be a writer, then write!

I love NaNoWriMo (even if it scares me half to death with visions of falling mid-month into a writing-induced coma).