Mystery writer Robert Bennett joins us today to share his experiences as a writer. I'm particularly happy to have him as his most recent book features an agricultural pathologist and a computer geek, two professions that fascinate me. In fact, by day, I'm a computer geek.

Why did you decide to write? 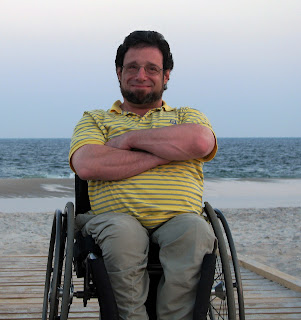 I’ve wanted to write all my life. When I was younger I kept lizards as pets. As I learned more about them I wanted to write a book about them. Unfortunately that never materialized, but the dream of being a writer stayed with me. Then, fate gave me the opportunity when I was 28 yrs old. I had a car accident, which eventually paralyzed my legs. While I was recuperating and learning to deal with my new body limits I took the opportunity to learn how to develop my passion for writing. I started with nonfiction articles about disability issues but then moved on to fiction.

How much research do you do?

I’ve always believed that the old adage ‘write what you know’ really should be ‘write what you can find out about’. That philosophy came in handy while I was doing journalism. As a freelancer I was writing articles about a wide variety of subjects, for a diverse audience. I had to learn about the subjects I was asked to write about. That required research, a lot of it. I learned to use the internet. I learned to conduct interviews. Now, when I write fiction, I research every aspect of my stories, from where the characters come from (their dialects and cultural mannerisms) to settings (my stories have and will continue to be set in places I’ve traveled to). I’ve researched archeology, architecture, music, poisons, virtual reality and adaptive technologies.

What’s your favorite method for researching?

I’m not sure I have a favorite method, though I almost never start writing until I’ve at least scoured the internet for tidbits of information related to the kinds of story I want to write. From there I collect resource articles and the names of experts I’ll contact either by phone or email to interview later.

Do you have a favorite theme or message for your readers?

I’ve always had a soft spot for the disenfranchised masses, those that society ignores or mistreats. Before my accident I was working as a social worker in a group home for mentally challenged men. That gave me some outsider’s understanding about how a certain group of people with disabilities might think and interact with the world. After my accident, and with a newly-minted wheelchair-user’s perspective on the world, I began to write about what it was like to have a disability. In my fiction, my protagonist is a blind man. I endeavor to show that disability is not something one accepts but rather something that one learns to deal with. I try to show that people are people who have to find ways to get on with their day to day lives.

What is the best advice someone has given you about writing? The worst advice?

My writing mentor taught me that everyone has a story that is authentic to them and that only that person has the authority to write that story. There is no such thing as fiction. You can fictionalize a story, but in its bare essence everything comes from pieces of who we are and what we have experienced.

You know that little voice you sometimes hear in the back of your mind? In my opinion it is the voice of instinct talking to you, but it is also a character. I believe we all have such characters living within us. I once wrote a short story (sadly, unpublished) about the voices inside the mind of a person who was undergoing surgery. In it each voice took the shape of a ‘physical’ being. He had to listen to each of the characters that he met along his journey in order to recovery from that surgery. In the same way when I am developing a story I let my characters tell me their experiences and how they want to proceed from the beginning to the end of the story I am writing through them.

That is the age-old question, isn’t it? Is a great story character-driven or plot-driven? Does the setting take you to a far off place where you can successfully suspend disbelief? My father didn’t have much patience for weeding through overly developed settings. He wanted to get to the meat of the story, the action. My mother would say it’s the emotion of the characters that is compelling to her, and the complexity of their lives that drives her to read further. For me, it’s all of that and more. A great story, which is a rare and difficult thing to find, has to first put me into a world I’m interested in seeing. It has to show me things I either haven’t seen in my daily life or that I’ve wanted to know more about. Perhaps that is why I use the places I’ve visited as backdrops for my stories. And, perhaps it is why I throw a lot of technology into my stories. Then, of course, I throw in the people and cultures that have always fascinated me. Who are they? Where do they come from? What emotions, philosophies and desires drive them to do the things they do? I don’t know if I’ve written a great book though. That is for my readers to decide, isn’t it? My mentor used to say he is an expert in the creation of his stories, but not in what they mean.

If a reader took away one thing from your book(s), what would you like that to be?

Everyone has a disability, whether it is visible or not. We each struggle to overcome our own shortcomings. We each struggle to do the best we can with the life we are given. Some manage to do better than others in pursuit of that goal. In the end, it is the act of living that matters, not the manner or the adaptive tools we use in order to succeed in that life. My protagonist uses a GPS and a sonic cane to navigate his world. Someone in the “real world” uses a hearing aide. What does it matter as long as their life is a successful one?

Where do you see yourself as an author in five years? 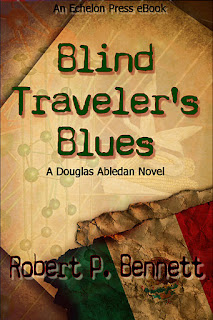 My Blind Traveler mystery series explores the life of a blind man as he manages to navigate through his world. Thus far each story has focused on the use of one of his remaining physical senses as a tool to solving the crime he is presented with. I have several senses left to explore. I also have several challenges I’d like to present to my character, and I invite my readers to suggest challenges they think a blind man who solves crimes should be presented with.

Robert Bennett, a former social worker turned writer, lives in the house he grew up in with his mother, one of his two brothers, two dogs that don’t get along, and a turtle. His lifelong focus has been a concern for the needs of society’s disenfranchised. His articles span a wide range of topics from sports to technology and from politics to social justice. His fiction is grounded in real world events and technologies as well as his own philosophical concerns. "It is the act of truly living and believing in yourself that is important, not the manner in which that action is undertaken." Mr. Bennett has spoken to groups of physical therapy students, church members and senior citizens, and has appeared on several radio programs. Contact Mr. Bennett through his website at http://www.enablingwords.com/ .

The year is 2021. Natural forces have changed our world. As the Earth's magnetic poles have shifted, pressure on the planet’s mantle layer is building. The bottom line…earthquakes now wreak havoc in areas they have never occurred before.

In Mexico, members of an archaeological team investigate the remains of an ancient village uncovered by a quake; racing to prove their theories about the civilization that once lived there. But, disaster strikes when the accidental destruction of an artifact unleashes a worldwide agricultural plague.

Halfway across the continent, Douglas Abledan, a blind computer technologist, embarks on a long anticipated vacation. On the plane to Chicago, he meets world-renowned agricultural pathologist Cara Cordelia. Little do either of them know she has been targeted for murder.

In this stand-alone sequel to his critically acclaimed "Blind Traveler Down a Dark River," author Robert P. Bennett continues to bring us suspense and intrigue while exploring a world of the not too distant future. While society struggles with the impact of natural changes, the advancement of new technology enables a blind man to investigate a murder.

A pleasant read. I especially like the bit about the voice in the back of your head. Robert's a creative fellow.

Thanks for the comment!
Voices in your head is just one of the problems writers have, I think. :)