The talented science fiction writer, Marian Allen, agreed to join us and I'm so glad she did. She's written a great new book, Force of Habit, as well as a short story, By the Book. I'm a huge fan of the original Star Trek television show (although I'd like to claim that I was too young to see the episodes when they originally aired, LOL) and Marian has woven a story that will delight fans of that series.
* * * * *

Thanks for having me today, Amy! I love talking story. :) 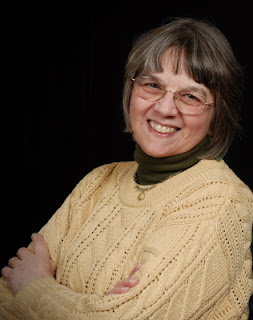 I was born in Louisville, Kentucky and now live in rural Indiana. For as long as I can remember, I've loved telling and being told stories. When, at the age of about six, I was informed that somebody got paid for writing all those books and movies and television shows, I abandoned my previous ambition (beachcomber), and became a writer.

On Aliens and Alley Jammers
One of the eternal questions, right up there with, "Which came first: the chicken or the egg?" is, "Are you a plotter or a pantser?" Sometimes the answer isn't that easy.

When I wrote my upcoming novel, FORCE OF HABIT, I began with a short story I had written by the seat of my pants. It was a take-off of the original Star Trek show, with the elements and characters of the show in the background and the action carried by original characters (and Tetra Petrie, who was created by my long-time friend C. Jane Peyton).

As a farce, the story moved so far from the original tone of the show, it wasn't difficult to move it to a totally original work, and this was where the plotting and planning came into the picture.

I had already created an alien world for the action and peopled it with a police force and a planetary governing body representing the various types of interests. My main characters were original, although Tetra was Vulcan. Or was she half-Vulcan? There seemed to be a lot of that going around in fan fiction. The villains, of course, were Klingons. 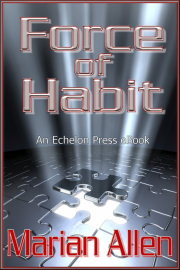 That wouldn't do. Tetra became an amphibious humanoid from the water planet Gilhoo. Spock became her brother, Quatro, and moved from the background to the middle ground. The Klingons became the Stokk: smooth customers with violence as part of their courtesy. Since mistaken identity was the pivot of the plot, I gave the Stokk brightly colored skin and hair so that people with skin and hair tones within a wide range of similarity are hard for them to tell apart.

I planned to just change the names of the rest of the television show's characters, but a strange thing happened: they became themselves. As the framework of the story was expanded to the size of a novel, all the characters stopped being tweaks of other people's characters and took on their own personalities, flaws, strengths, attitudes and abilities. They changed gender. They changed species. Since they weren't under contract and didn't have any fans, they faded into the background if I didn't need them.

And, somewhere along the line, alley jammers got into the picture. In the first scene of the book, one of the Stokk is accused of starting a rumor that an eating establishment is using alley jammers in its cuisine. That was supposed to be a one-time reference, but the name stuck in my head. In another scene, a character taking a short cut through back ways and byways pulls an alley jammer out of his pocket. At the end, Bel, my main character, ends up with a pink alley jammer as a pet.

I ran a contest last year to promote my previous novel (a fantasy, and unconnected with this book), EEL'S REVERENCE. One of the prizes was choice of name in a story I proposed to write promoting FORCE OF HABIT. That story, "By the Book", is set on the world of FORCE OF HABIT and features one of the characters. It's free at Smashwords.

I'm running a similar contest this year. Details are at my blog.

FORCE OF HABIT is also available at Kindle and the NookBook store.

Thanks for letting me come talk story on your blog, Amy. I forgot to say that FORCE OF HABIT is also available in all electronic formats at OmniLit and Smashwords.

I was glad to have you "on board" and it's esp. nice to find another person who enjoys the original Star Trek!

I loved it! I watched it when it first aired, and it blew my mind. ~grin~ I think Scotty was my favorite character. That being so, you can tell how far I moved from fanfic to original when you look at the ship's engineer in FORCE OF HABIT. Wotan Hessaphess is not anybody you'd have a crush on. lol!

Count me in as a Star Trek geek. I have a whole lotta Star Trek references in my new book, This Brilliant Darkness. In my book, it's Star Trails with Captain Kurt, Klingoffs and Fullcons, and the whole town waltzes out into the streets on Halloween for a Star Trails parade. In a perfect world, in a perfect world...a green girl can dream, can't she?

Red, I LOVE your Star Trails stuff! Man, they didn't know what they were unleashing when they let that show out of the box. lol!