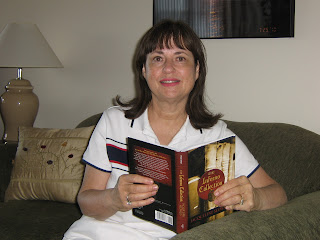 Multi-award winning author Jacqueline Seewald has taught creative, expository and technical writing at the university level as well as high school English. She also worked as an academic librarian and an educational media specialist. Eleven of her books of fiction have been published. Her short stories as well as poems, essays, reviews and articles have appeared in hundreds of diverse publications and numerous anthologies. Her paranormal romantic mystery novels, THE INFERNO COLLECTION and THE DROWNING POOL, have been widely acclaimed. The third romantic mystery in the Kim Reynolds series, THE TRUTH SLEUTH, is a new release. Her recent historical romance set in the Regency period TEA LEAVES AND TAROT CARDS is available in both hardcover and large print editions. A young adult novel, STACY’S SONG, was also recently published to excellent reviews.

I’ve now written three novels in a paranormal romantic mystery series. The new murder mystery is THE TRUTH SLEUTH to be published by Five Star/Gale in hardcover edition June 8th and available for pre-order from Amazon, B&N, Target, Borders, etc.


Each of the three novels feature Kim Reynolds, an academic librarian, accustomed to doing research. As she observes to police detective Mike Gardner, reference work is a lot like police detection, you’re trying to solve puzzles and find information that leads to a solution.

With the first novel of the series, THE INFERNO COLLECTION, I wrote the book and rewrote it many times and did considerable research on the topic of inferno collections, both historical and current. Eventually, I cut away over a third of the novel because I felt it should be a fast-paced thriller. I wanted to provide readers with an exciting experience. I attempted to write a novel that would build in tension. 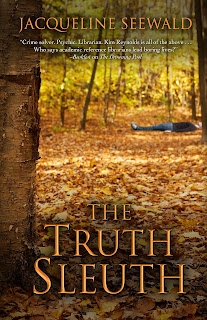 Several of the men who’ve read the book have observed that it has a feminist message. A number of reviewers also commented on the thoughtful ideas in the book and its depth of meaning. Some readers have liked the fact that the novel is something of a “literary” work as well as in the mystery/thriller genre. Different strokes for different folks. I’m hoping that many people, men and women alike, will choose to read and enjoy these mystery novels.

I’ve been asked many times: what is an inferno collection? Simply put, it’s a collection of “condemned” banned or censored books. When a reader/reviewer of The Inferno Collection asked if inferno collections actually exist, I responded that not only did they exist in the past but still exist in more sophisticated and subtle forms today.

It is a fact that librarians have viewed themselves as gatekeepers. For example, libraries such as Boston Public at one time found it necessary to maintain separate inferno collections of banned books considered inappropriate for general public display and reading. Often these were books deemed salacious such as James Joyce’s Ulysses. Another example is the Robert Winslow Gordon "Inferno" Collection in the Archive of Folk Song, Library of Congress, consisting of material separated out because of bawdy and scatological subject matter. Paul S. Boyer in his article “Boston Book Censorship in the Twenties” observed that Boston’s censorship began with the very first governor of the Plymouth colony, William Bradford, but became notorious in the 1920’s when the phrase “banned in Boston” took on new meaning.

It is not only governments and libraries that have chosen to ban books found objectionable for various reasons. Materials are often deemed unacceptable for political or religious reasons or are considered profane, pornographic or sexually too explicit for youth. Publishers and booksellers make these decisions and determinations as well. However, it is well to keep in mind that good books often stir controversy. They are designed to question and make people think. That is not something to fear or repress but rather to admire and respect. As Voltaire, author of the banned satire Candide, once stated: “I do not agree with what you have to say, but I'll defend to the death your right to say it.”

I hope that many readers will enjoy the three novels in this series: The Inferno Collection, The Drowning Pool and The Truth Sleuth.
Posted by Amy at 6:36 PM

Thanks, Jacqueline. That was a great post and now I know what an Inferno Collection is.

Best of luck with your new novel!

Your cover is absolutely dazzling, Jacqueline! What a fascinating post--and a book to check out!

Thanks for stopping by!

Thank you for the lovely compliment on the cover art.
I'm encouraging readers to look for my mystery series at their local library or put in a request there since the novels are in hardcover and have been well-reviewed by BOOKLIST among others.

I'm expecting that new paperback and e-book editions will be published soon by several other publishers making the novels much more affordable for individual readers.

Jacqueline, well said! I so agree with you that good books make people question and think.

I did not know what an Inferno collection was either. Thanks so much for clearing that up and hearty good luck with the new release!

Thanks for dropping by and commenting!

Thanks, Marilyn, I hope you enjoy the novels!

I didn't know much about inferno collections until I went to a graduate seminar for librarians at Rutgers. A Princeton professor was
lecturing on the topic and gave us
all sorts of interesting facts and information. He excited my imagination. I knew right there and then that an inferno collection would be the perfect frame for a mystery thriller.

Thanks for stopping by. I love being in contact with new readers.

That was such an informative post. Congratulations on your great reviews for THE TRUTH SLEUTH. Now all I have to do is figure out how to find the time to read all three in this terrific series.

Thanks for your kind words, Cindy.
Hope you and all our wonderful fellow authors have a great holiday weekend!

Very interesting, Jacqueline. Now that I know what an Infernal Collection is, I'm reminded of the 1966 movie, "Fahrenheit 451," based on the Ray Bradbury novel. The story took book burning to the extreme, and as much as I enjoyed it, I thought it could never happen in real life. Seems I was wrong. There's something all kinds of wrong about that.

That was a great film! I love Ray Bradbury. His writing has real substance. I connect inferno collections with Savonarola and the bonfire of the vanities.

This was an interesting post as I'd never heard the term, Inferno Collection, before. Thanks for explaining it so thoroughly, and good luck with your series!

Great post and yes a book that piques the reader is a true gem. I also loved the movie "451" and wrote a terrible short story about the subject. Fortunately, no one ever read it.

I had to do some digging, but the research into inferno collections was really interesting. It got my imagination going.

My all time favorite movie based on Bradbury's work is SOMETHING WICKED THIS WAY COMES. A wonderful short story he wrote is "The Pedestrian." It's science fiction that has come to pass.