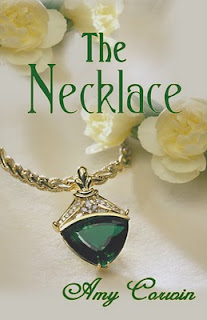 This is so exciting, I can hardly stand it! My book, The Necklace, now has a cover and a tentative release date of November, 2010! That's less than 3 months away. The cover is absolutely gorgeous, as you can see. The artist really did an outstanding job. This book, published by Highland Press, is the "pre-quel" to I Bid One American, so by the holidays (I hope) there will be three books out about the various wacky members of the Archer family.

They don't need to be read in any particular order, but if you're driven (like me) to want them in order, here is the list. The books are set in the first half of the 19th century and include a bit of murder to add spice to the romance.

The Necklace, (tentative Nov 2010) about Oriana Archer and Chilton Dacy and a missing emerald necklace that may be cursed.

I Bid One American, (2008) about Oriana's brother, Nathaniel, who has inherited a dukedom and can't seem to resist an American heiress named Charlotte who is more interested in dead Pharaohs than dukes.

The Bricklayer's Helper, (Aug 2010), Sarah, a niece of the Archers, is disguised as a bricklayer to avoid the murderer searching for her, and she turns to an inquiry agent, William, for help.

I've been working, on and off, on another in this series, involving Oriana's younger sister, Helen. Poor Helen loses the family's emerald necklace and winds up in the company of an earl as she tries to retrieve it without making everyone think she's just another empty-minded blonde. This one doesn't have a title yet, but the first draft is done, so I'm making progress.

And, while there will probably be other books about long-lost members of the Archer family, since I can't resist writing about them, I've also got the first draft written of another historical romantic mystery featuring an inquiry agent from the Second Sons Inquiry Agency. This one is called The Deadliest Rose. It needs editing and polishing, of course, before I submit it to a publisher, but I'm really, really excited by it. I got to use all my gardening information—and even descriptions of old garden roses I grow in my own garden—for this book, and I love it when I can include the roses I adore in one of my books.

So, it's a pretty exciting time with lots of things to celebrate!

Wow. Congrats on your new book. I love the cover!