Today we have mystery writer, Lois Winston, joining us. She is starting a virtual tour to celebrate the release of her latest book, Death by Killer Mop Doll. I'm really pleased to have her because I'm a big fan of the cozy mystery genre and the fun sub-genre of craft mystery stories.

I grew up in an era where girls spent a lot of time learning handicrafts, and I spent a lot of enjoyable hours with my parents, the Girl Scouts, and at summer camp learning a wide variety of crafts. At one time or another, I've run a tumbler to polish rocks to make jewelry (I still have some of it!); learning to knit, sew, build a fire, cook over a campfire, make lanyards, sit-upons, pottery, string beads, beeswax candles, soap, butter, and any one of a number of things. I'm not sure if children spend as many hours now doing these things, but I get a huge wave of nostalgia when I think about them, and craft mystery stories tend to bring back all my most cherished memories.  Somehow, I just can't think that computer games will have the same nostalia value for kids of today, but.... In any event, here is Lois! 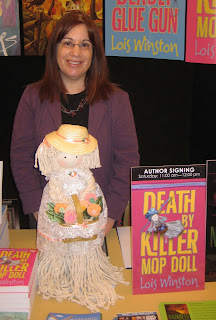 Amy, before we begin the interview, I want to thank you for inviting me to your Fiction Writing and Other Oddities blog as part of my virtual tour for the release of Death By Killer Mop Doll, the second book in my Anastasia Pollack Crafting Mysteries.

I’d also like your readers to know that I’ll be giving away 5 signed copies of Death By Killer Mop Doll at the end of the tour. To enter the drawing to win a copy, readers only need to post a comment to any of the blogs on the tour. The full tour schedule can be found at my website, http://www.loiswinston.com/ , and the Killer Crafts & Crafty Killers blog, http://www.anastasiapollack.blogspot.com/ . In addition, I’m giving away 3 copies of Death By Killer Mop Doll on Goodreads, http://www.goodreads.com/giveaway/show/15173-death-by-killer-mop-doll .

Why did you decide to write?
The voices in my head decided for me. Seriously. I hadn’t written any fiction since Freshman Comp in college. And that was a loooong time ago. Then one day, these characters popped into my head and wouldn’t go away. So I finally decided to tell their story. Once I did, they contacted all their character friends and relatives, and before I knew it, there was a long line of characters demanding I write about them, too. And the line shows no sign of letting up any time soon.

Do you have a favorite theme or message for your readers?
I write humorous amateur sleuth mysteries, so along with hoping I’m providing a great mystery plot, I want my readers to laugh. I think there’s too much in the real world that scares the you-know-what out of us on a daily basis. Laughter helps us get through all that you-know-what.

What is the best advice someone has given you about writing? The worst advice?
The best advice I ever received: “Every scene in a book MUST do one of two things: either advance the story or tell the reader something essential about the character that the reader needs to know AT THAT GIVEN MOMENT. If the scene does neither, it’s filler and doesn’t belong in the book.”

The worst advice I ever received: “You shouldn’t bother trying to write; you’ll never sell a book.”

How do you approach a new book? Outlines? Just an idea?
I don’t outline. I probably should because it would make my writing life a lot easier, but I like the spontaneity and excitement that comes from not quite knowing where my characters will take me. I begin with an idea for an opening scene and a general concept of how the book will end. Then I write a few paragraphs of blurb. From there I just start writing. I do maintain a timeline as I write, though, to keep track of events as they unfold.

How do you develop your characters?
People I’ve known have given me the inspiration for many of my characters. For instance, Lucille, Anastasia’s curmudgeon of a communist mother-in-law, is loosely based on my own mother-in-law, a diehard commie to her dying day. Only my mother-in-law never owned a French bulldog.

What makes a great book in your opinion?
For me, a great book is one that hooks me with the opening sentence, doesn’t let me go until the last word on the last page, and leaves me saying, “Wow! I wish I’d written that!” In mysteries, it’s also got to be a book that keeps me guessing. I hate when I’ve figured out whodunit early into the story.

If a reader took away one thing from your book(s), what would you like that to be?
That I’ve provided the reader with a few hours of enjoyable entertainment.

Do you have any tips for aspiring authors? 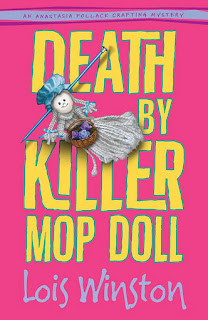 Never give up! It took me ten years from the day I started writing until I sold my first book. This is not a business of instant gratification. You’ve got to be in it for the long haul if you expect to succeed.

Also, if you’re writing because you think it’s a quick path to riches, you’d have better luck playing the stock market -- with a monkey throwing darts at a dart board to pick your stocks. I have friends who consistently make the NY Times list and still can’t afford to quit their day jobs. For every James Patterson, there are tens of thousands of authors making barely enough to cover their weekly Starbucks habit. Writers write because they have to, not because they think it will make them wealthy.

Where do you see yourself as an author in five years?
I’d like to see myself on the NY Times list (what author wouldn’t?)

Where do you see the publishing industry going in the next few years and where do you see yourself within this industry?
Wow! If only someone had a crystal ball…I wish I knew the answers to those questions. Publishing used to be an industry that never changed, something authors and readers alike could always count on for being a constant in our lives. Now publishing is changing be the hour. More and more authors are turning to self-publishing their work as more and more publishers slash their midlist budgets and buy fewer new authors. Life in the publishing world as we knew it up to a few years ago will never be the same, but there will always be readers in search of good books. I think as the price of eReaders continues to come down and newer ones become available, eBooks will gain a larger share of the marketplace. I hope that all the changes coming to the industry will open more doors for authors, but we’ll have to wait to see what happens.

As for me, I hope I’m still writing and selling books.

Brief Bio
Lois Winston is the author of the critically acclaimed Anastasia Pollack Crafting Mysteries published by Midnight Ink. Assault With a Deadly Glue Gun, the first book in the series, received starred reviews from Publishers Weekly and Booklist and was recently nominated for a Readers Choice Award by the Salt Lake City Library System. The new year brings with it the release of Death By Killer Mop Doll, the second book in the series. Read an excerpt at http://www.loiswinston.com/excerptap2.html . Visit Lois at her website: http://www.loiswinston.com/  and Anastasia at the Killer Crafts & Crafty Killers blog: http://www.anastasiapollack.blogspot.com/ . You can also follow Lois and Anastasia on Twitter @anasleuth.

Blurb for DEATH BY KILLER MOP DOLL
Overdue bills and constant mother vs. mother-in-law battles at home are bad enough. But crafts editor Anastasia Pollack's stress level is maxed out when she and her fellow American Woman editors get roped into unpaid gigs for a revamped morning TV show. Before the glue is dry on Anastasia's mop dolls, morning TV turns crime drama when the studio is trashed and the producer is murdered. Former co-hosts Vince and Monica—sleazy D-list celebrities—stand out among a lengthy lineup of suspects, all furious over the show's new format. And Anastasia has no clue her snooping has landed her directly in the killer's unforgiving spotlight.

Great interview, Lois! I agree with both you BEST advice and your WORST. And I am STILL laughing at the thought of Lucille being inspired by your mother in law. That will keep me giggling all day! Can't wait to read your new one! Best, Christine

Great advice, Lois! I am still struggling to get my first book published. It's very reassuring to learn that it can take a while.
Regards, Joanne

Joanne, good luck to you on your road to publication.

I'm glad your "best advice" included the second half of that sentence.
"Every scene in a book MUST do one of two things: either advance the story or tell the reader something essential about the character that the reader needs to know AT THAT GIVEN MOMENT. If the scene does neither, it’s filler and doesn’t belong in the book."
So often, I hear only the first part: that EVERY single utterance must "advance the plot". As a reader, I often want to dawdle a bit with the characters, get to know them, see some interesting things through their eyes. That spartan writing does not allow such.
That said, in my own writing, I AM guilty of including bits of dialog I think is clever (but isn't truly needed), or bits of description which fleshes out the sensory perception of that moment (but isn't truly essential), or thoughts/reactions of a character which tells something about them (but an editor might red-pencil it).

Another great interview of you, Lois. I liked your advice about scenes. It's one I will keep with me in my head every time I'm editing. Thank you.
Patti

The best writing advice I ever got was, "Take your work seriously, not yourself. Your work is a cute hobby, it's what you DO. Take that seriously, and insist that others around you take it seriously." That advice literally changed my life.

Jeff, too often writers fall in love with their "bon mots," even when they don't belong in a scene or chapter. That's never good.

Lois, that's why all writers need an editor. ;) Thanks for understanding what I MEANT to say!

Well, I for one am glad you didn't listen to that advice about bothering to write. Sometimes the only advice you should listen to is the advice you give yourself! Way to go, Lois!

Killer mop doll! I love it. Yes, I remember those artsy-craftsy days of yore. I was never good at those things, and until this moment, I would never have guessed there was such a thing as a "crafting mystery". Now, I'll have to check this out! Thanks for a great interview.

Isn't it great? I know when I first discovered the craft-linked mysteries it opened wide new vistas of books to read and I've been thrilled ever since.

Thank you so much for dropping by and leaving a comment!