So What Happens Next: The Coroner


As most of you know, I write mysteries set in the early years of the 19th century, the Regency period. As I mentioned in my previous blog about law enforcement during that period, I’m fascinated by the processes at play in the process of catching a murderer. I mean, I’d better be, since I write mysteries, right?

So here’s a bit more detail about what happens when a murder is committed before the days of CSI or even a regular police force, Scotland Yard, and all those wonderful detectives.

Make a Hue and Cry

If James Everyman witnesses a murder or finds a dead body, the first thing he has to do is make “hue and cry,” the equivalent of calling 9-1-1 (emergency services) today. Hue and cry is actually required by law, first instituted in 1285 by the Statute of Winchester. The purpose was to alert folks to the crime and catch the criminal (theoretically fleeing). Anyone who witnessed a crime was required to make hue and cry, not just constables, and the alarm would spread through the countryside in an effort to alert folks and catch the bad guy.

The interesting part to modern folks who are used to calling 9-1-1 and then leaving matters in the hands of law enforcement officials, is that historically, all able-bodied men who heard the hue and cry (it included, literally, shouting to notify folks to the crime and the fleeing criminal) were required to help in the pursuit. Just like a posse in a western.

By the Regency, there was actually a police magazine, Police Gazette, often called The Hue and Cry which gave details about folks wanted for crimes. The magazine was started in 1772 by John Fielding (chief magistrate of the Bow Street Court at that time) and initially called The Quarterly Pursuit. It went through several names to eventually settle on Police Gazette or Hue and Cry by 1828. The magazine included information about rewards offered for information or the capture of criminals, notices about criminals, and requests for information.

So what does John Everyman do, now? Well, we’re going to assume there’s no murderer standing over the body clutching a bloody knife and babbling his confession. So John Everyman has discovered a body and made hue and cry. The constable and the coroner respond to the hue and cry and round up a dozen or so men to view the body in situ (if possible). Between twelve and twenty-four men will make up this coroner’s jury and they are required to examine the body in any case of suspicious death. The dead person can’t be buried until this is done, therefore the law stipulates that it must be done within a few days of finding the body.

And this may seem odd to us today, but the jury examines the corpse, and I do mean literally examines, for signs of violence or clues that could assist in coming to the right verdict. Since there was no refrigeration in the 19th century, the inquest had to be held as quickly as possible, usually within a day or so of the death. The jury could also ask questions of witnesses during the inquest—they are active participants in the proceedings. Remember, this is the coroner’s jury and inquest and their only mission is to categorize the death as one of the following: murder (or manslaughter); suicide (self-murder); accidental death; or natural causes. They aren’t concerned with identifying the murderer, if it was murder, although if that comes out in the inquest, the responsible party would be bound over for trial.

In fact, the purpose of the inquest was very specific. They are only intended to establish the following facts:

• The identity of the deceased;

• How, when and where the death occurred; and

• Draw attention to anything that might lead to further deaths.

When the inquest is concluded, the findings are recorded in a formal document called the inquisition and include an attestation signed by the coroner and the jury. The inquisition must contain: the name of the deceased; the injury/disease causing the death; the date, time, place & circumstances of the death; and the conclusion (or verdict). Naturally, if the condition of the body precludes identification, that shall be duly noted. 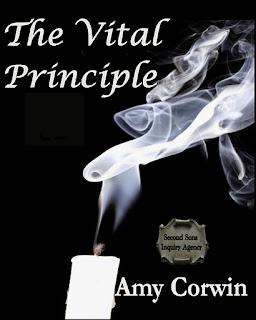 We'll continue with this look at law enforcement, forensics and other fun facts about catching murderers in the 19th century in the next few blogs. Stay tuned!

And note, on Feb 1 and 2, 2012, The Vital Principle will be free on Amazon! So be sure to mark your calendars and grab a copy if you've been dying to read book 1 in the Second Sons Inquiry Agency series of Regency mysteries.

The Vital Principle
A cold draft, a candle extinguished, darkness…and yet…nothing except a suggestion, a touch of the unknown. Did they truly contact the spirit world or is it all an illusion? Perhaps it’s simply a clever fraud perpetrated by spiritualist, Prudence Barnard. Their host, Lord Crowley, certainly suspects her. He hired an inquiry agent to prove it and yet the agent has proved nothing.


The truth remains as illusive as the fading smoke from the candle.

With shaking hands the small group of guests relight the candles and turn to each other in relief. All returns to normal until Lord Crowley suddenly dies, poisoned by an unseen killer. Who would do such a thing? Someone, or some thing, in the shadowy room? Everyone present is well-known, a longtime friend, except Prudence and the inquiry agent.

It must be the spiritualist. She is guilty, she’s the stranger in the room, the unknown entity.

And all eyes turn to inquiry agent, Knighton Gaunt, to uncover the truth.

But is Prudence really a murderess, or an innocent bystander? Knighton isn’t sure. She might be a charlatan, but his instincts warn him that there are other forces at play at Rosecrest, forces that remain hidden beneath a jovial façade. He takes a chance on Prudence to set a trap for the murderer.

But will the murderer take the bait or will someone else at Rosecrest die before Knighton can work his way through the maze of deceit and lies woven by the innocent-seeming guests?

“The Vital Principle” is the first in the Second Son’s Inquiry Agency series of mysteries, featuring the agency’s coolly intellectual founder, Knighton Gaunt. Other books include a variety of inquiry agents associated with Second Sons, or the illustrious founder. The series is set in England’s fascinating Regency period in the early years of the 19th century, when King George III was deemed unfit to rule and the Prince Regent, the eventual George IV, ruled in his stead.

Each volume stands alone as a mystery touched with romance.
'
Enjoy!
Posted by Amy at 9:37 AM

Email ThisBlogThis!Share to TwitterShare to FacebookShare to Pinterest
Labels: history of law enforcement, Regency, the coroner, The Vital Principle

I recently put out an ebook of my writing, called The New Death and others. It's a collection of short pieces, mostly dark fantasy.

I was wondering if you'd be interested in doing a review on your blog.

If so, please email me: news@apolitical.info. Let me know what file format is easiest for you, and I'll send you a free copy.

You can download a sample from the ebook's page on Smashwords: