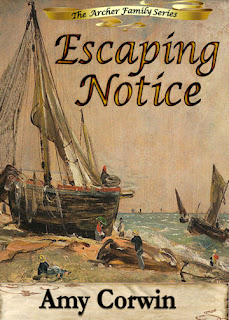 To celebrate the release of my latest Regency romantic mystery featuring the irrepressible Archer family, Escaping Notice, my book The Vital Principle is free for two days on Amazon.com. I hope you'll pass the word and check it out! The Vital Principle has been a great flagship novel for me and continues to sell well.

Here's a brief blurb about The Vital Principle, along with a small excerpt.


The Vital Principle
A Second Sons Inquiry Agency Mystery
On sale for FREE from March 30-31, 2011

Back Cover Blurb
In 1815, an inquiry agent, Mr. Knighton Gaunt, is asked by Lord Crowley to attend a séance with the express purpose of revealing the spiritualist as a fraud. The séance ends abruptly, however, and during the turmoil, someone poisons Lord Crowley's brandy. Appalled that murder has been committed under his very nose, Gaunt is left to investigate not only fraud, but murder. Suspicion turns first to the spiritualist, Miss Prudence Barnard, but as Gaunt digs deeper into the twisted history of the guests at Rosecrest, he discovers more deadly secrets. Inevitably, long-time friends turn against one another as the tension mounts and Gaunt is challenged to separate fact from fiction. 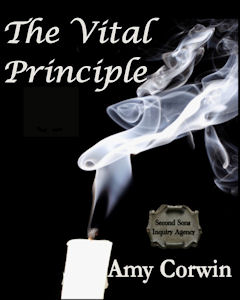 In this scene, inquiry agent Knight Gaunt is questioning Miss Prudence Barnard, a spiritualist he was hired to expose as a fraud. While he doesn’t quite believe she murdered their host, he’s not entirely sure she didn’t, either, and she’s not making it easy for him.

“May came from the right, however. Past the dowager and Lord Crowley.”

“Rest assured, I will. And the others came around the table from that direction, as well.” He glanced at her again, remembering the details. “You assisted the dowager, didn’t you?”

“I don’t remember precisely, but I supposed I might have.”

“She was standing a yard or so away from the table. And you stood in front of her with your back to the table?”

Her expression tightened. “Then you do remember. Although I'm sure you believe I was close enough to Lord Crowley to pour a few drops of Prussic acid into his brandy. That is what you’re insinuating, isn't it?”

While her accusation was true, he couldn't actually picture her doing that. He had closely observed her the previous evening, waiting for her to try some trick. If she had approached Crowley’s snifter that closely, he ought to remember it.

He nodded. It would have been extremely difficult for her to carry around a bottle of Prussic acid without either pockets or a reticule.

Of course, he intended to verify the lack of pockets or reticule with Miss Barnard’s maid and the other lady guests. One of them may have noticed.

“If you’d just ask the dowager—” She stopped and then added hastily, “But don’t bother her now. She’s not well. It’s been very difficult with first her husband dying and now her son….” She ended awkwardly and glanced away, turning to focus on the sewing basket and magazine. Then her gaze flashed to his. He could see a sudden memory leap into her mind as her expression changed.

“I was wrong.” Her dark brows scrunched briefly. “I—”

She shook her head.

“What did you remember? There’s no point in holding back. Ultimately, I’ll discover the truth.”

“Yes.” A smile twisted his mouth. “Now what did you remember?”

“Will you stop equivocating? If it’s something odd, I can assure you there were enough people in the room to help confirm it. There’s no point in being coy.”

“Is that what I’m being? Coy? How unusual.” She certainly had a talent for sweetly stated sarcasm.

“I’ll hold whatever you tell me in confidence. I’m reputed to be a reasonably fair man.”

“As long as women aren’t involved. And it conforms to your idea of the truth.”

“Undoubtedly.” He held her gaze.

She flushed and pushed at the magazine on the table with her fingertips. “I’m sorry. That was rude of me. You do rather have a reputation, however, for distrusting women. Although I’m sure you must have an excellent reason.”

“I assure you, I don’t dislike women.”

“As long as they stay comfortably in their place? And aren’t charlatans? We mustn’t forget how important absolute honesty is.”

“As long as you answer my questions truthfully, I’m completely impartial.”

A Brief Bio
Amy Corwin is a charter member of the Romance Writers of America and recently joined Mystery Writers of America. She has been writing for the last ten years and managing a career as an enterprise systems administrator in the computer industry.  She writes Regencies/historicals, mysteries, and contemporary paranormals. To be truthful, most of her books include a bit of murder and mayhem since she discovered that killing off at least one character is a highly effective way to make the remaining ones toe the plot line.
Amy’s books include the two Regency romances, SMUGGLED ROSE, and LOVE, THE CRITIC; three Regency romantic mysteries, I BID ONE AMERICAN, THE BRICKLAYER’S HELPER, and THE NECKLACE; and her first paranormal, VAMPIRE PROTECTOR.

Join her and discover that every good mystery has a touch of romance.