An interview with K.J. Dahlen, author of Bones

Bones
By K.J. Dahlen
Interview
Why did you decide to write?
I love to read and one day I noticed all the books I was reading ended the same way. I wanted something different and  I thought I could do it, so I picked up a pen and began to write my own stories.

What is the best thing (or worst) that has happened to you because of writing?

I love seeing my books on a shelf. My books are in five different libraries and when I take another book in I love it when the librarians tell me the readers are waiting for the next book!

How much research do you do?
I really don’t do a lot of research. After all, it’s called fiction for a reason. Most of my books are pure imagination.

What’s your favorite method for researching? Most of the little research I do I do on the internet. You can find anything there.

Do you have a favorite theme or message for your readers?
I like to keep my readers on the edge of their seats, waiting to turn the next page. If I can do that then I feel I’ve done my job as a writer

When do you write/what is your writing day like?
I turn my computer on as soon as my husband leaves for work. I have found my best writing time is early morning when my mind is fresh and I have nothing else to do.

What is the best advice someone has given you about writing? The worst advice?
When I first thought about being a writer my husband told me to go for it. He encouraged me to try. That’s the best thing anyone could say.. At least try it

How do you approach a new book? Outlines? Just an idea?
I usually outline my ideas  but the book may not stay in the outline. My characters sometimes take the story off in their own direction.

Who are your favorite authors? Have any authors inspired you or influenced your work?
I enjoy so many authors it’s hard to pick just a few. Some of the authors I enjoy reading are friends of mine that are just now getting noticed as authors. McKensie S Hart is one, Bruce Sarte is another. Sandra K is another.  I enjoy John Grisham, James Pattern, Janet Dailey, plus a whole lot more.

What makes a great book in your opinion?
A book that takes me along with the story. If I can imagine myself in the place of one of the characters in the book that’s what makes a good story to me.

If a reader took away one thing from your book(s), what would you like that to be?
I want my readers to become part of my stories. I want them to feel the same tensions as my characters feel and at the end feel the same satisfaction.

Do you have any tips for aspiring authors?
Never give up on your dreams to become a writer. It may take a while to get to where you want to be but hang in there. I think a writer just has to find the right place for their works.

Where do you see yourself as an author in five years?
Hopefully making money from my writing. I’d like to be the next J.K. Rowlings J Wishful thinking I know but it’s a dream

Where do you see the publishing industry going in the next few years and where do you see yourself within this industry?
I think everything will eventually go digital, which in my opinion will be a shame. I feel there is nothing better than holding an actual book in your hand but now days most people want convenience.

Brief Bio
Kim lives in a small town (population 495) in Wisconsin. From her deck she can see the Mississippi River on one side and the bluffs, where eagles live and nest on the other side. She lives with her husband Dave and dog Sammy. Her two children are grown and two grandchildren and for that fact she feels blessed. She loves to watch people and that has helped her with her writing. She loves to create characters and put them in a troubling situation and just sit back and let them do all the work. They surprise even her at times. They take on a life of their own and the twists and turns become a story. She found she liked mystery/thrillers the best. She likes to keep her readers guessing until the very end of the book.

Her next book coming out is in March 2012, titled Fall from Grace.

BLURB :When a threat against America comes to the surface, retired  Homeland Security agent Lincoln Hawks is brought back to help put down the threat. He finds the group he's after is  the same group that murdered his wife and daughter five  years ago. Can Lincoln stop The Ghost Crew before they  destroy America?

This book is being published by Bucks County Publishing. She is also published by Rogue Phoeniz Press, Solstice,  and Avalon.
Email: kjdahlen1@yahoo.com
Web site: www.kjdahlen.com
I am on facebook and twitter as kjdahlen 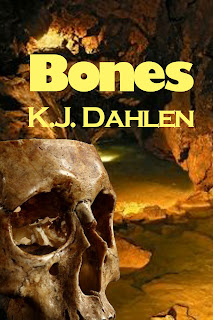 Bones Blurb
When human bones are discovered in a cave just outside of town, it’s up to Sheriff Max Reardon to find out who the bones belonged to. But someone in town doesn’t want the bones identified and they go to great lengths to try and stop Max’s investigation.

They break into Max’s house and try and destroy the evidence and when that doesn’t work they frame Max for murder. Can Max clear his name and bring the murderer or murderers to justice?

Excerpt from Bones
Max squatted near the opening in the rocky outcrop and took off his sunglasses. He was hot and tired and had just about given up finding this place. He wasn’t eager to go inside since the inside of the opening was dark and uninviting. But Max knew he had to go in there. The small hole in the side of the cliff was barely big enough for a child to scramble into let alone a full size man, but he knew he didn’t have a choice. God, I hate small places, he thought as he crawled inside. The hole was small and cramped and Max had to bend over to get through. I really hate small places, he emphasized as he struggled to get through the cramped opening. The hole in the cliff had been harder to find than he expected. The directions given to him by two young boys hadn’t been all that clear.

The boys said the opening was straight up from the dam below and a little left of the big oak tree. What they failed to tell him was which big oak tree. The whole hill was littered with oak trees right up to the base of the cliff.

It had taken him the better part of an hour to find the opening. There had been a lot of hillside to search. The boys had told him they left an old t-shirt to mark the opening, but Max hadn’t found the t-shirt. Some small animal or the wind must have carried it away. He hoped he had the right entrance this time.

He’d found a couple of other openings in the rock face that had led him nowhere. This opening appeared to be the one the boys had described. According to the boys, this small cave led to a cavern with the treasure. Max hoped it led somewhere.

His hands and face were scratched up from pushing brambles and brush out of his way. The thought had also occurred to him that the seldom visited, rocky part of the side of a cliff just a little ways north of the town Max was sheriff of, might be just the spot to run into a snoozing wolf or worse yet a rattlesnake. He heard something scramble out of his way a couple of times, but he hadn’t heard the symbolic rattle of the snake so whatever remained hidden from his sight wasn’t a snake. He’d tried to make enough noise to ward off unexpected company and hoped he hadn’t sounded like a complete idiot in the process. If anyone had spotted him, they would have thought he was drunk in the middle of the morning and that would never do for a sheriff.

The flashlight he held in his hand did little to penetrate the utter darkness that surrounded him. The cave walls and floor were slimy with what Max didn’t even want to hazard a guess and it smelled even worse. It smelled like something crawled in this narrow opening and died. The boys who found the cave might think this little venture was "neat", but Max didn’t. He’d lost his sense of adventure for little games like this a long time ago. He couldn’t believe he was here now.

The boys had been in this cave a couple of days before and had found what they thought was an Indian burial place. They had been reluctant at first to tell anyone of their find but eventually told their dads. As a result, Richard Crabtree had brought his son, Timmy, to see him. Max could tell that Timmy hadn’t wanted to tell anyone about his secret place and Max hadn’t been all that interested in the boy’s tale. Most of it was just the imagination of a ten year old. It wasn’t until Timmy mentioned the skeletons that Max became interested.

Max knew enough about the local tribes in Wisconsin to know they didn’t bury their dead above ground in forgotten caves. The boys told him that they hadn’t seen or found any other Indian artifacts and Timmy was positive someone else had robbed the cave of all its treasure. As sheriff, Max felt bound to check out their story. If there were skeletons in there, he had to find out why.
Giveaway
Kim will be giving away a $10 Amazon gift certificate, plus a chance to work with her on developing an idea for a new book, if you leave a comment. So be sure to follow the tour and leave comments. You can find dates for all of her tour stops at:
http://goddessfishpromotions.blogspot.com/2012/01/virtual-book-tour-bones-by-kj-dahlen.html.

P.S. I have to say that I really love the cover for Kim's book, Bones.

Thank you for hosting KJ today!

You are a prolific writer. I love the review of Bones, and the small excerpt you gave of your new one sounds really exciting.

That's good advice your husband gave you, because if you don't try you will never know.

As a librarian, I love it that Library patrons are waiting for your books.

I so glad to see so many familiar faces!

I hope you'll spread the link and enjoy your visit!