Jack Russells, or is that Jane Russells?

Folks may wonder why I’ve been a tad quiet lately, but it’s because we have a new member of the family: a Jack Russell Terrier named Miss Daisy May. Or a Jane Russell, as my husband says. We adopted her from a friend of my husband’s who did not want her anymore. She’s a year old and had been boarded in a kennel.

We’ve had her for a week now.

Why am I telling you this? Well, you see, we’d been warned against Jack Russells, just like we were warned about adopting one of our other “children,” a Chesapeake Bay Retriever named Molly.

Prior to this, we’d only had labs (and chows and other strays) and as everyone knows, labs are “easy.”

How did this all come about?

Well, my husband decided he wanted to give me a Jack Russell for Christmas, but when the breeder heard that we also had two cats, he refused to give my husband a dog. So, we figured it was just one of those ideas that would never take root. You see, we have a bad habit of adopting strays and right now, our menagerie consists of: 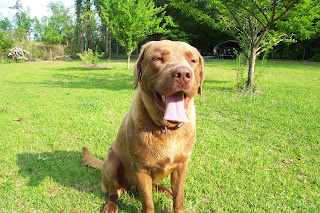 A chocolate Labrador Retriever named Rowdy—the result of an accident with a chocolate lab female one of our friends owned. Rowdy is 128 lbs and a totally loveable giant.

A Chesapeake Bay Retriever named Molly—a big girl at 90 lbs and s sweet as can be and absurdly smart, although she freaks outif you say, “No!”

An orange cat named Psycho—a male, stray cat who is totally psycho. He has absolutely NO sense of self preservation and we found him on our porch one day, sleeping while the dogs barked like crazy at him. Nuts. Completely.

A tortoise-shell cat named Cricket—a female stray who decided to live with us despite the fact that she totally hates all dogs. She tolerates Rowdy, though. Every critter on earth loves Rowdy. I’ve had serious concerns at times that someone would “walk off” with him just because he’s just so cool about everything. 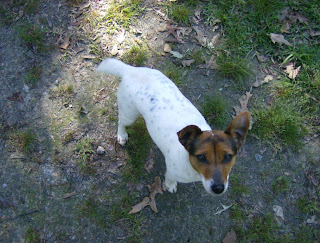 Enter…Miss Daisy May. Yes, despite the breeder’s warning, my husband’s friend decided he wanted to get rid of her (he’d inexplicably called her Stripe, which reminded me of that evil Gremlin so we renamed her). We brought her home a week ago.

Here’s how it went.
1st hour: The cats freaked and disappeared upstairs. Molly hated her. Rowdy fell in love with her initially, but soon cooled. I imagine his internal thoughts went:
“Wow! Cool! A sweet, nubile female…wait. What is this? Where’s the rest of her? Okay, maybe she’s not really my dream come true. Okay. Whatever. I’m over it.”

But Miss Daisy May took one look at Rowdy and her internal thoughts must have been something like: “Wow! Cool! Tall, dark and handsome! I love you!” She proceeded to curl up in his bed, next to him. She slept with him the first night. She continues to adore him, despite his general attitude that She Does Not Exist. 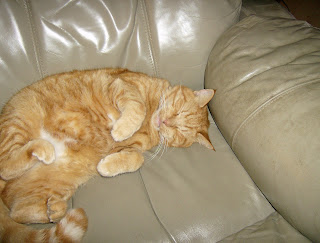 Day Two: Psycho decided he’d had enough hiding. He sniffed at Daisy. Daisy sniffed at him and wanted to play, but Psycho is too old and didn’t appreciate it so he abandoned the idea and hid again.

Interesting note: Miss Daisy May seems to be housebroken, even though the owner told us she was not. At least she goes outside and we’ve seen no evidence of going inside.
She and Molly have made friends and spent an hour chasing each other around the front yard.

Also, after taking the pack for our twice-daily walk, Miss Daisy May has decided she’s a retriever because she goes right into the pond along with the other dogs. Oh, and we’ve discovered she’ll actually retrieve. Cool.

I’m teaching her to sit.

Day Three: the cats have come out of hiding, realizing that Miss Daisy May isn’t going to up and die the way Cricket wants her to. Cricket hates her, but then Cricket hates all dogs. Psycho is willing to play for a few seconds before he has enough and abandons playtime for a quiet nap. Psycho is back to sleeping on my lap and is willing to share it with Miss Daisy May. There’s still a bit of sibling rivalry, but since they both end up asleep, it’s working out. 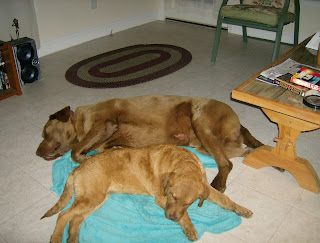 Miss Daisy May is getting better about sitting, and we’re enjoying playing fetch with her.

At the start of another week: We can say that as usual, despite conventional wisdom, things have worked out. We have cats and dogs living together. We love them all. They more or less get along.

I admit, we’re lucky. We have 20 acres, 17 of which are wooded/swamp. We have a pond and 1 acre fenced for the dogs. We walk the dogs twice a day about a mile (it’s a mile round trip to the mailbox) and we’re good about exhausting the dogs.

The key really is exhausting the animals before they come inside.

The biggest enemy is boredom so when the animals get antsy, we toss them outside. They have an acre fenced in to mess around in, and when it's hot, we leave the back gate open so they can go to the pond.

A week after adopting Miss Daisy May, she’s settled in beautifully. She is giving Miss Molly much needed exercise and acting as a heating pad for Mr. Rowdy’s old bones. Psycho is asleep on my lap right now, with Miss Daisy May at my side as I write this. Once again, we’ve flouted the conventional wisdom that you can’t have Jack Russell dogs and cats. But then, our Jack Russell also swims and retrieves, and I intend to teach her some tricks.