The Rabbit is Free 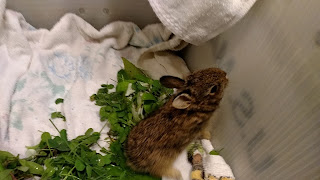 I finally released the rabbit. Couldn't write about it until today. I guess I got more attached than I thought I would. Anyway, I couldn't think about him yesterday without crying.

Anyway, we did a soft release, which means early in the morning, I took the rabbit's cage up to an area near our pond that has a lot of cover, some trees, and some good grass. I've seen rabbits up there on the wildlife camera we have, so I figure it is a good area. And it is only a few yards away from where we think the rabbit's nest was.

So, I placed the cage near some thickets and walked away. Well, not really. The rabbit didn't want to get out, and I couldn't resist saying goodbye, so I picked him up and gave his soft ears a final rubbing (he loved that) and placed him back in his cage to let him make the decision, himself, about when he wanted to leave. 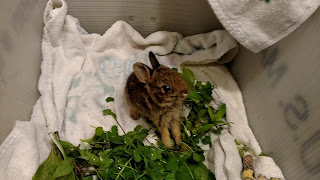 Later that afternoon, I checked the area and there was no sign of him. But I left the cage there overnight in case he wanted to get back inside. I doubt he did, but at least he had the choice.


I guess that's it. I hope he finds other rabbits and has a good life. It's hard to think of him out there, alone. I keep thinking about all the hawks, bobcats, foxes, coyotes, snakes, feral dogs and cats, and other critters out there who would find him a tasty snack. And I can't for the life of me understand how people can abandon pets out in the country (they abandon them at our mailbox all the time because they think the area is just agricultural fields), not thinking about the starvation and terrors their pet will face.

At least I know the rabbit is back where he belongs and will probably find a mate (or two) and hopefully thrive. I'm hoping for the best.

It was a wonderful experience even if it does make me cry a little now that he's on his own. Wish him luck!
Posted by Amy at 10:38 AM

You're so right... Abandoning a domesticated animal out in the wild is hugely cruel, and like you I can't understand how people go through with it. The walking away... Oh, my. Oh, no. So I get how hard it must've been to let the rabbit go (I'm not sure I could've :) ) — and I admire you enormously for doing it. It was the right thing to do, no question. Happy life, Rabbit!
Guilie @ Life In Dogs

Thanks for the comments.

I do have a great update!
This morning, my husband was out walking around the pond near where I left the open cage and he says that about 20 feet away, he saw the bunny! He said the bunny is crazy-wild, which is great, because that means it is wary enough to have a good chance of survival.

of course the bunny was always crazy-wild around him, ha, ha. The bunny only liked me because I'd fed it. And he liked having me rub his ears. But it made me feel better, and I'm glad he's running around in the thick grass, having a good time in the morning sun.

That's so cool! Glad to hear the rabbit was spotted—and that he's not clamoring to come back to domesticity... Yes, that would put his chances out in the wild in a pretty bad place :) He'll make it, you'll see. Yeah, he'll be fine :)

Thanks for the update!