I used to raise chickens (and probably will do so again in the future) and was always interested in the chicken tractors which is basically a chicken house you can move around your yard to let the chickens browse fresh/different areas of your yard.

Well, as my past blogs have mentioned, we have this baby rabbit we're trying to raise until it gets old enough to release. And because I have no intention of becoming a rehabber, I wanted something for the rabbit to use that gave him slightly more room than the pet carrier we are using as his home, and which could be placed outside for him to get acclimated to the weather and natural environment.

Because he'll probably be released in 2 weeks, I also didn't want to buy some elaborate rabbit hutch. 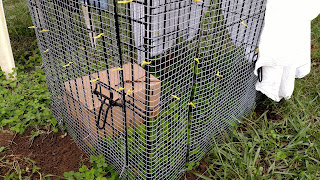 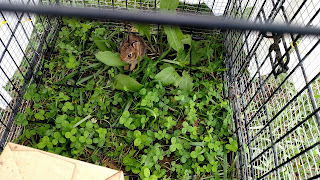 The rabbit running around the rabbit tractor 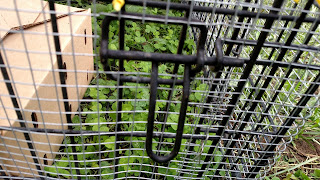 Detail on the door. I cut a panel for the door itself and cut around the latch so that it could be open and shut, but the mesh still goes to the ground to keep the rabbit safe inside. 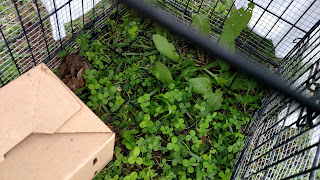 I built the rabbit tractor after I remembered we had an old wire kennel for our Jack Russell Terrier.  I removed the bottom tray, revealing a pretty much open bottom that would let grasses and clover come through to be available to the rabbit. Except the bars were too far apart to keep a small rabbit safe and enclosed. So I got some hardware cloth and wrapped it around the cage and secured it with wire where the rabbit could reach and plastic zip-ties where he couldn't reach. I carefully attached panels to the doors so I could still open the doors.

I also put in a small cardboard box and scrap of fabric for a little hutch where he could go and sleep/be protected.

And now the bunny can spend a few hours outside and collect his own food, while still being safe inside his "hutch."

Turned out that he was afraid of the wide-open spaces (no wonder, really) so I took a few linen towels and drapped the hutch to give him some shade, privacy, and a sense of security. It seems to be working fine.
Posted by Amy at 7:21 PM

Brilliant idea, and good manual skills, too. So cool you're able to help this little one... I'll be keeping track of the release, if you post about it. Good luck, Rabbit!
Guilie @ Quiet Laughter

Hi!
Thanks! I finally released him yesterday. He could have been released earlier, but I guess I just liked taking care of him, so I kept him a little longer.