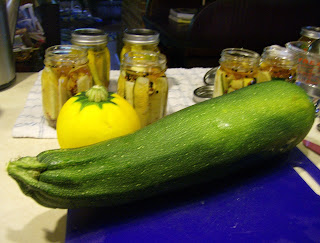 Oops, someone forgot to pick the veggies for a while. Sigh. But I did manage to harvest almost 2 quarts of garlic (2 qts of cleaned garlic cloves, to be exact) and a whole BUNCH of zucchini. As you can see in the background, I ended up using a lot of it for pickles. Then I took some more and made flour-less zucchini muffins.

I'm very pleased with the pickles. We are trying to cut out sugar and this particular recipe has no sugar at all in it. It's a spicy pickle with hot pepper flakes and garlic and we've already eaten one jar. What makes it even better is that you don't have to go through that long hot water bath canning process. You clean the jars (fill with boiling water until ready to use), prepare the zucchini and while you're doing that, boil the vinegar with the spices for 5 minutes. Then fill the jars and pour in the boiling vinegar. Of course you have to store them in the refrigerator, but that's okay with us. I got the recipe from Eatsy at this link. 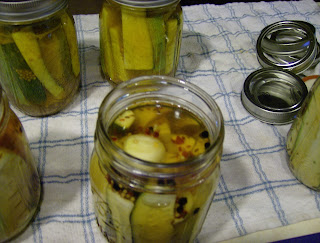 For the zucchinis I did not use for pickles (I made 12 pints of pickles) I made zucchini bread with almond flour. Okay, actually, I turned this into zucchini muffins because we like them for breakfast.

I got the recipe for that from comfybelly.com at this link. Of course, I modified it just a wee bit to add a little more spice because we really like our spices, but the basic recipe was from comfybelly. 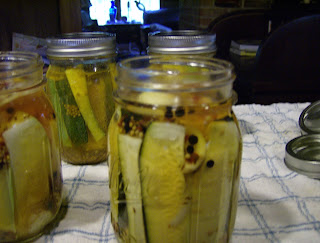 So, if you are overrun with zucchini or squash, you might look into making either pickles or bread. My sister likes to make zucchini cake, but as I mentioned, we are trying to cut down on sugar and gluten, so we're not doing the cake thing. However, if you make those muffins, they are like mini carrot cakes and are absolutely wonderful for breakfast with a dollop of cream cheese. In fact, I almost prefer them to most cakes at this point.

I've been working extra hard on my writing lately and for those who are interested, I'm still taking my net proceeds from The Vital Principle and donating them to the Red Cross for the tornado victims. I haven't earned as much as I would like (I'd at least like to give $500) but every little bit helps.

For my fans, the second Prudence Barnard/Knighton Gaunt mystery, The Dead Man's View, is in the final stages and should be out in August. Pru and Knighton were first introduced to readers in The Vital Principle, and I hope folks will enjoy their continuing adventures. In The Dead Man's View, Pru discovers she has a second cousin and goes to visit him, only to have him die within a week of her arrival. The coroner believes her cousin committed suicide, but Pru finds clues that lead her to believe otherwise and she writes to Knighton to gain his assistance in proving her cousin was murdered. 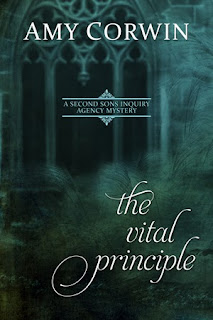 I'm torn at the moment between two of her designs for The Dead Man's View, but hopefully I'll have a new cover to show folks soon!

In the meantime, the Second Sons Inquiry Agency is getting a new detective and I'm writing chapter five even as we speak. It's tentatively called: The Illusion of Desire and like The Vital Principle, it deals with some difficult topics but there are dashes of black humor that I hope readers will enjoy.

For readers of my contemporary mystery, Whacked!, I'm editing a second manuscript (I don't have a title yet) in preparation to sending it to my editor at Five Star. The new one is also set in the small town of Peyton, NC, and features Kelly Harmony. Kelly is suspected of killing her roommate and then torching the apartment to cover up the crime and it doesn't help matters when she finds a stranger's dead body in her new home. This is the first of what will be several mysteries featuring the Harmony family in Peyton, so cross your fingers that my editor likes it.

On the novella front, I wrote a sweet Regency novella last spring and submitted it to my editor at Highland Press, as well as my first sweet Western romance novella. I hope she likes at least one of them and decides to include it in one of the upcoming Highland Press anthologies.

Finally, my paranormal romance, A Fall of Silver, is on sale for one more week at $.99 so if you are interested, you might want to jump on it now before it goes back to its normal price.

That's all the news and I hope to write another blog soon on the craft of writing, as well as keeping up better on my progress with the art of writing.

Sounds like you're on a roll! Looking foreward to seeing what Pru and Kinighton get up to next. The pickles sound delicious, BTW:)

Thanks for stopping by, Eloise. The pickles really are good and I hope if you or others have extra produce from the garden, you'll give pickling a try. It's a great way to stretch the season a little.

Have a super summer!