The Gospel According to Prissy Blog Tour 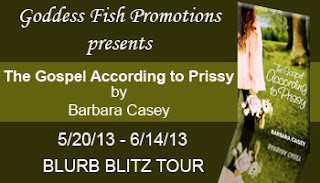 THE GOSPEL ACCORDING TO PRISSY
By
Barbara Casey 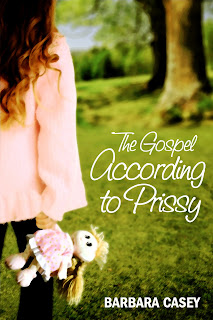 BLURB:
Three Army veteran misfits, a college dropout, an unmotivated high school graduate accused of murder, a controversial warden of a women's prison, and a little girl with the gift of prophesy – these are the people 31-year-old Lara Kruger invites into her life after suffering a miscarriage, a divorce from an abusive husband, and unemployment.

EXCERPT:
Miriam walked away from her desk and paused in front of the unframed full-length mirror she had salvaged from the recent renovations in the women’s shower rooms.  The edges were chipped and blackened, and there was a fairly large crack that ran vertically from one corner to the other.  The condition of the mirror was the result, no doubt, of one of many displays of frustration and anger within the prison walls before she took over.  Still, the mirror served its purpose.  On those rare occasions when Warden Miriam Temple of the Braden Women’s Correctional Institution needed to be sure she looked her best, at least she could do so in the privacy of her own office.

Studying her reflection, she saw a tall, aging fifty-nine-year-old woman with dark hair streaked with gray cut in a simple shag, myopic brown eyes made evident by the wire-framed glasses, and a raw-boned body that could be considered well-proportioned if it weren’t for the fact that it was about twenty pounds on the heavy side, fifteen of which had settled around her thighs and buttocks.  “Pear shaped, as opposed to apple shaped,” she frequently reminded herself, “so that means at least I won’t die of a heart attack.”  The fact that her ear lobes were also plump and didn’t have the diagonal creases indicating some type of heart disease seemed to confirm that fact.  She didn’t know if these old-wives’ tales she had grown up with were really true, but she liked to keep an open mind, especially when they worked to her benefit. 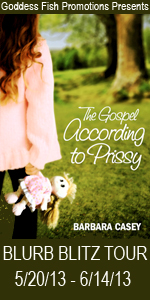 She normally didn’t wear make-up, but this morning before leaving for work, she had dug out her small tapestry bag that held what few cosmetics she owned and applied a little blush and a touch of lipstick.  She rubbed one cheek with her hand now, thinking that maybe she shouldn’t have bothered.  She didn’t need to impress anyone.  Even if there had been the awkwardness that sometimes comes with being a large woman, it had been replaced years ago by the confidence born from a privileged background and the level of acceptance and comfort from which she viewed herself.

Her dark gray suit and crisp white blouse were clean and unwrinkled, thanks to the prison laundry facilities.  The plain black pumps she wore looked both practical and appropriate to complete the over-all appearance of discipline, control, strength, and above all, a positive attitude.  It was the attitude within the prison that Miriam had worked the hardest on when she took over as head warden six years earlier.  There had been a stifling wave of hopelessness and despair among the female inmates so thick it made it difficult to breathe.  This was manifested daily in brawls, food fights, and a behavior of non-compliance in general.  “Animals get treated better than we do,” had been the mantra at the prison.

For six years Miriam had been working fourteen-hour days, overseeing the operations of the facility, staying on top of problems, writing reports, and talking to every person she could reach about helping to set up programs for “her girls” as she referred to them.  Each of Miriam’s programs offered something to a few of her girls, but not to all, something she struggled with daily.  She constantly researched what other correctional institutions were doing not only in this country but other countries as well, trying to come up with new ways to stimulate her girls and help them feel enthusiastic about their lives.

It had worked.  She started getting noticed after the first year of her tenure.  Complaints from the prisoners dropped, a State audit confirmed that for the first time in over a decade the prison budget would be in the black, and the over-all appearance of the facility was vastly improved.  Government officials who previously had been reluctant to show interest now started to open doors for this hard-working, persistent, and obviously dedicated woman.

And then Prissy had been born. 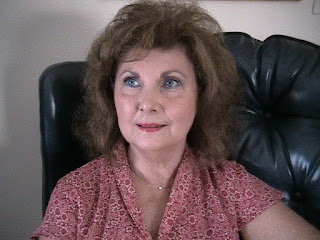 Barbara Casey is president of the Barbara Casey Agency, representing adult fiction and nonfiction for authors throughout the United States, Great Britain, and Japan.  She is also the author of numerous articles, poems, and short stories.  Her award-winning novels have received national recognition, including the Independent Publishers Book Award, the Dana Award for Best Novel, and the Publisher’s Best Seller Award.  Her novel, The House of Kane, released in 2008, was considered for a Pulitzer nomination, and her novel Just Like Family received special recognition by the 7-Eleven Corporation.  Her latest young adult novel, The Cadence of Gypsies, was reviewed by the Smithsonian for its list of 2011 Best Books. The Gospel According to Prissy, a contemporary adult novel, was released in the spring of 2013.

In addition to being a frequent guest lecturer at universities and writers’ conferences, Ms. Casey served as judge for the Pathfinder Literary Awards in Palm Beach and Martin Counties, Florida, and was the Florida Regional Advisor for the Society of Children's Book Writers and Illustrators from 1991 through 2003.

Be sure to follow Barbara's blog tour. She will be giving away a $25 Amazon or BN.com gift card to one randomly chosen person who leaves comments during the tour. You can follow the tour by checking out the stops at:  http://goddessfishpromotions.blogspot.com/2013/03/blurb-blitz-tour-gospel-according-to.html .

Thank you for joining us today, Barbara, and good luck with your book. It sounds fascinating!

Email ThisBlogThis!Share to TwitterShare to FacebookShare to Pinterest
Labels: barbara casey, Fiction, Goddess Fish, the gospel according to prissy, Writing

Thank you for hosting me today. I have met so many wonderful bloggers on my tour so far, that I really look forward to each stop. I appreciate your invitation and kind words.

Thank you for hosting today.

Several of you who have been following my tour have commented that you want to know more about Prissy. Without revealing too much of the story, I thought I would introduce you to Prissy’s 79-year-old grandmother, Bulah Tilden…

It was late in the afternoon – that time of day when the shadows were a little longer, the air – normally still – was stirring just a bit, and the sun was barely low enough in the western sky so that the large branches of the giant poplar tree could throw a little shade onto the front porch. The old woman scratched around inside the pouch and pinched off a little bit of the coarse, shredded tobacco. Then using one finger, the middle one, she carefully pushed the tobacco inside her mouth between her cheek and gum. The tin can had come with green beans in it, but it was empty now and the label had been scraped off. She liked green bean cans the best. They had grooves circling around the sides that made it easy for her to hold on to. The metal was thin as well, and she could easily mold its shape to fit her hand. Bending her head slightly, she spit some of the dark juice into the can and then settled back into her chair, enjoying the tingly, warming sensation in her mouth.

As Bulah Tilden rocked, her lips moved as though in conversation while silently she reflected on her life. There had been so much evil and sadness. Somehow it just didn’t seem natural for her to outlive her own children. But the Lord worked in mysterious ways. And it was His wish that she live. He had left her with the two youngest granddaughters and a great-grandbaby – a baby that had been born with the gift of prophesy. One of the granddaughters was in prison. That was where she had her baby. The other granddaughter had been living in Atlanta, but she was back home now where she belonged. Praise the Lord.

The two granddaughters and that baby was all she had left, but that was His wish. There was a reason things had turned out the way they had. She put her faith in her Lord and prayed each day that He would guide her and show her the way. She didn’t need to understand His plan; she only needed to be ready to do His will whenever He asked. She also prayed every day asking for His forgiveness, for without that forgiveness she knew, “Upon the wicked He shall rain snares, fire and brimstone, and a horrible tempest, this shall be the portion of their cup.” She hadn’t lived for seventy-nine years on this earth only to wind up burning in hell.

Soon He would be calling her home. She knew this as well. She could tell by the way the leaves on the poplar tree were twisting on their stems – much the same way they did right before a thunderstorm. Her dark eyes were clouded, making it difficult to see, and her hearing was almost completely gone. But her mind remained sharp. The Lord had something in mind for her, one last thing He needed for her to do. And once she did that one last thing, then she knew that her Lord would be calling her home. Praise the Lord.

I enjoyed reading about Bulah, thank you.

You are so welcome. Thank you for stopping by and commenting.

Fascinating excerpt about the grandmother.

Hi! I'm so glad to see everyone's comments. I was thrilled that Barbara was able to join us on my blog. Big thanks to her and to everyone who has stopped by!

Amy, I had a wonderful time. Thank you again for hosting me. I will be checking back in later for any additional posts, but I wanted to thank you for doing such a nice job today.

Thank you for the extra in the comments. I appreciate it.

You are welcome, Mary. Have a great weekend.

I just wanted to stop back by and let you and your bloggers know that my book, THE GOSPEL ACCORDING TO PRISSY, was just selected for the "2013 List of Best Summer Reads" by Conversations Live Radio/Conversations Book Club.

That is GREAT news and thanks for letting us know!
Congrats!