Need a Freebie for Yourself?

Need a little mystery, a few chills, a little hint of romance?

The holidays are undoubtedly a lot of fun and excitement, but everyone needs a few minutes to relax every once in a while and in the spirit of giving, The Vital Principle is free until Tuesday, November 20!

The Vital Principle is the first book in my mystery series featuring the Second Sons Inquiry Agency. The mysteries are set in England in the first half of the 19th century and this particular novel features the Agency's founder, Knighton Gaunt, a man who gave up social status in favor of discovering the truth. Miss Prudence Barnard is an impoverished gentlewoman trying to survive by acting as a spiritualist until she is accused of murdering her host. 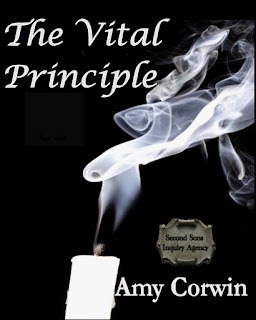 Here is a small scene from the beginning of The Vital Principle where accusations of murder focus more tightly on Prudence. Mr. Gretton, the constable, would like nothing better than to arrest Prudence on the spot, but Gaunt is beginning to have doubts....

Prudence shrugged and stared at the gleaming surface of the table, feeling trapped. “Why do you think it was placed in his brandy? Why not during the meal? Or at some other point in the evening? Surely it couldn’t have escaped your notice that we had aperitifs before supper. In fact, I handed Lord Crowley his glass. I even refilled it.” She sighed elaborately. “Two missed opportunities.”
“It were in the brandy. His glass smells of bitter almonds,” Mr. Gretton replied.
“Is that characteristic of this Prussic acid you mentioned?” she asked, aiming the question at Mr. Gaunt.
“Yes.”
“What form does this poison take? Couldn’t it have been in his glass when he poured the brandy?” she asked.
Mr. Gaunt shook his head and eyed Mr. Gretton. “Unlikely. How could she be sure which glass he would take?”
“She?” Pru repeated.
“Poison be a woman’s weapon. I doubt there's any could argue the fact.” Mr. Gretton stared hard at her.
“There are no male poisoners? How remarkable. One wonders if the one hundred and fifty poor souls in Rome would agree after Exili gave them his most careful attentions in the seventeenth century.”
The coroner, Dr. Winters, grunted. “You see where educating women leads?”
Mouth twisting cynically, Mr. Gaunt murmured in a soft tone obviously not meant to be heard, “Clearly, a woman should not be able to defend herself. We must at all costs preserve our right to do it for her.”
Surprised, Pru caught his gaze. He flicked a half-smile at her, shrugged, and grew very interested in the carpeting at his feet.
Oblivious to Mr. Gaunt’s remark, the doctor continued, “There may have been a few men who have used poison. However, it remains largely the province of females to do away with others through such cowardly means.” He rubbed his hands. “I believe I’m done here, Mr. Gretton. I’ll leave you to finish the questioning and make the apprehension. If possible.”
While Dr. Winters and the constable exchanged a few words, Pru watched Mr. Gaunt. His remark puzzled her with its overtones of sympathy. She hadn’t expected anyone, other than Mr. Denham perhaps, to defend her.
As if aware of her scrutiny, Mr. Gaunt edged closer. He spoke in low tones no one else could hear. “You’re very composed, Miss Barnard.”
“For a murderess? Would tears avail me? Or convince anyone of my innocence?”
“They might. A woman’s tears are often most efficacious.”
“Except when the decision has already been made. A trial seems almost superfluous, doesn’t it?” Her voice was low and biting with anger. A deep feeling of ill-use made it difficult for her to remain calm.
“No one has accused you,” Mr. Gaunt replied. “And if you had a hand in this, you’ll get a fair hearing.”
“Then you do think I murdered Lord Crowley? What possible motive could I have had?”

Hope you enjoyed this small glimpse and will take advantage of the opportunity to get a copy for yourself, FREE!