This topic probably isn't one you'd find on a writer's blog, but then, neither is gardening, and it's hard for me to stick to straight writing topics (particularly when you're spending months working on the same book, LOL).

Anyway, as soon as it was available, I upgraded my stalwart Dell desktop to Windows 8. It seemed appropriate for Halloween--I'm a sucker for cheap terror. It's why I love this time of year and the fact that I can watch as many Hammer Studio horror movies as I want. Besides, until I quit and become a full-time writer, I'm also a computer specialist and I like to keep up, not to mention that I usually appreciate new versions of things. They're exciting and I almost always find that the media doesn't give you a really accurate assessment of anything.

The Upgrade to Windows 8
I upgraded from Windows 7 on my desktop. Took a few hours, but you don't have to sit there and watch it. It pulled over all my old programs and files, so there was no problem, there. I did use the compatibility checker and it pointed out a few really old programs that I will need to upgrade, though. No big deal as I don't use them that often, anyway.

The following won't be "news" to folks who have been following all the blogs and boards about Windows 8, but I was a little disappointed, though, to find that because I have two monitors, I ended up with what is basically Windows 7 with no start menu. I had it in the back of my mind that surely it couldn't be that stupid and it would stretch Metro across both of them.

Not so. The new Metro interface only displays on the main monitor and worse, as soon as I click on any of my installed programs (even the Office 2010 tiles on the Metro interface) it immediately flips to the old Windows 7 interface on both monitors. 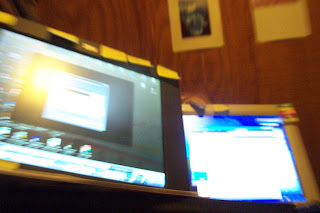 I've spent a couple of days laboriously flipping back to the Metro interface after I finish running whatever I'm running and then finally said, to heck with it. Now, I've just got Outlook open on my main monitor and whatever else running on the other. My beefs now are that I've resigned myself to a Windows interface without all the wonderful gadgets I used to have like the weather and time, because I'd have to keep flipping back to the Metro interface to see those. What's the point? Every time I click on an email to read it, it goes back to pure Windows sans Metro.

Everything takes two or three extra clicks to get there. Not cool, Microsoft. You've just made it harder for me to do anything and taken away the things I'd grown used to like the clock and weather because I refuse to have to keep hiking over to the upper right corner, waiting for Charms to appear, clicking on the Metro icon to get the Metro interface back for the few seconds it stays there so I can see the clock and weather before I click on something in one of my apps that makes Metro disappear again. That sentence is as awkward as this interface.

What can't I stay in Metro?
Why won't Metro stretch across both screens?
Why do all my applications, even the Microsoft Office ones, flip me out of Metro to standard Windows?
Why can't you automatically bring back the Metro interface after I close an application, or at least when I move it to the secondary monitor, so I don't have to *blinking* go to the upper-right-corner to summon the Charms menu to bring back the interface just to *blinking* see the weather and time?

Maybe I'll just go to the command prompt and use Powershell all the time instead of any menus or interfaces at all like I do at work--because this really is irritating.

I'm still looking for a way to set it to "auto-return" to Metro after I close an app or when nothing is running on the main monitor. I mean, really, why should I have to work to see the Metro interface?

I see no speed increase and in fact have noticed sluggishness/lack of responsiveness when opening programs, so all-in-all it's kind of a blah event. It didn't do any damage, but it didn't exactly do anything for me, either. But at least if you upgrade now, it's cheap.

I have hopes that over time, they'll think about giving us more options to tailor this beast to do things like stretch across two monitors and perhaps "auto-return" to Metro so we don't have to do that all the time.