Jenny is an amazing, accomplished woman, as you'll see when you read her bio at the end of this blog. Not only does she teach writing, but she is a published author, proving that some teachers no only teach, but also do. It's not easy to write suspense and she does a surperb job.


Making It, or: How Salmon Spawn 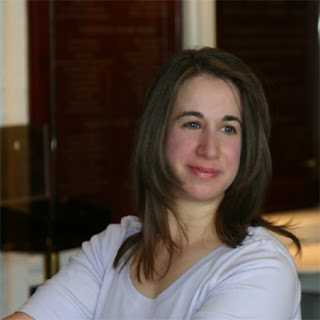 On my blog is a forum called Made It Moments. Over 125 authors so far have dropped by, answered the question “How did I know I’d made it,” then stayed to chat for a while.

I love this forum because every single answer is utterly unique—while all saying the exact same thing. I haven’t.

The concept of success in this writing world is a really hard one. The bar can be set awfully high. Once we pass one mile marker, we immediately see another one ahead.

The roads diverge then, and as Robert Frost wrote, the one you take may make all the difference. Or, it may not. In Amanda Hocking’s case she parlayed serious success as an independent author into serious success as she embarked on the traditional route. Whether that success continues remains to be seen. Whether she would’ve had such success if she didn’t start out independent is likewise an unknown.

If you travel down the independent road, other mile markers will ensue. Finding a good editor. Designing a cover. Deciding on print options. Uploading to various platforms. Setting a price. Seeing those first sales come in. Tweaking the price. Seeing the first double digit numbers hit. Triple digit. Quadruple. Or even higher. Then you get to be interviewed along with Karen McQuestion, John Locke, and let’s throw in Amanda Hocking again.

Have you made it?

I think the reason this question hangs us up is because we’re defining success based on the wrong things. The above things—any of the above.
Think about the salmon’s perspective.

He’s ‘made it’ when he arrives at the top of the stream without getting eaten.

The writer’s equivalent is, I think, getting up every day and putting words down on paper or screen without letting the inevitable discouragement creep in and stop you in the act.

Discouragement comes from all sorts of sources. It’s that little voice in our head that says things like, You can’t do this. And even if you can, what are the chances you’ll succeed? (See? Making it again). You’re not getting paid. You may never get paid. Aren’t there other, more important things to do? Clean the house, help a friend, take the kids somewhere, get a ‘real’ job?

And it’s not that those things aren’t all very important.
But—your writing is, too.
This is how it happened for me. I always wanted to write. I studied poetry and fiction until I graduated from college. During my sophomore year, my parents, who were not overly practical and typically encouraged my dreams, so I was wont to trust them, suggested that I might want to pursue something that stood a chance of allowing me to feed myself. I decided to double major in English and Psych, and wound up ABD in clinical psychology. But the siren’s call of writing never stopped singing, and during my internship, I began writing my first real novel.
I call it ‘real’ because this was the book where I found my writer’s voice in suspense. I’d always loved to read suspense, but somehow I never wrote it before.

Because I had heeded my parents’ advice and was working, I wrote this novel at 4 o’clock in the morning before leaving for shifts at the hospital. It took me about five months to complete—that’s how fired up I was. The novel was unpublishable, but it did earn me offers from agents. And once that carrot was dangled, my hunger pulled me through seven more books, two more agents, and many, many close calls.

The fact that you write, that you have this creative urge deep inside you, is a gift and deserves to be nurtured. Taken seriously. Given some time.

Virginia Woolf called it a room of one’s own.

You deserve for your writing to have a room.

If not a whole room, well—at least a converted closet, such as the one I wrote those eight novels in, and recently began my ninth.

If you can honor your gift enough to give it some space, and a dedicated portion of your day, however you manage to come by those things, then the results might surprise you. You just might come to something great enough to deserve revision, querying, uploading. 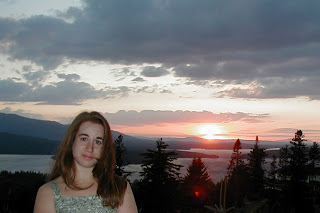 Jenny Milchman is a suspense writer from New Jersey. Her short story ‘The Very Old Man’ has been an Amazon bestseller, and another short piece will appear in the anthology ADIRONDACK MYSTERIES II in fall 2012. Jenny is the Chair of International Thriller Writers' Debut Authors Program. She is also the founder of Take Your Child to a Bookstore Day, and the Made It Moments forum on her blog. Jenny teaches writing and publishing for New York Writers Workshop and has designed curricula to teach writing to children. Her debut novel, COVER OF SNOW, will be published by Ballantine in early 2013.
Jenny in 2001 when her first book went on submission (above right). 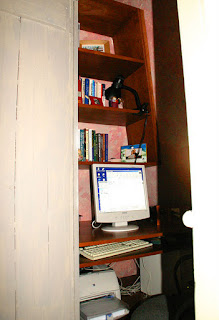 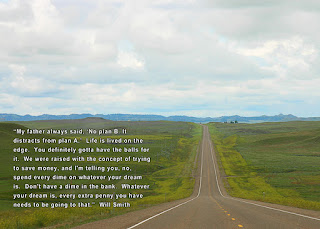 A closet of my own

* * * * *
Okay, now this is just weird. Because years ago when I was first writing, I took a large closet in my one bedroom condo and turned it into an office, complete with one of the original IBM PCs and a daisy-wheel printer. In those days, publishers wouldn't accept manuscripts printed on dot-matrix printers which were the only other alternative to a daisy-wheel.

Times have changed, at least in how your furnish your closet.

Thanks Jenny and I hope you sell a billion!
Posted by Amy at 1:01 PM

I'm so glad to have you here, Jenny, and this blog is very timely. We all fret so much about success: what it is, how to get it, etc.

As a former biology student, I do have one quibble though.

Success isn't making it upstream without getting eaten. It's spawning. LOL. Sorry. I just couldn't resist.

Hope your holidays are happy and successful (in any way you define success)!

Thank you, Amy, for welcoming me to your wonderful blog! And for the clarification--I actually, until you said that reproduction was the goal, hadn't thought of that. OK, I do write, and I teach writing/publishing, but clearly I know nothing about biology!

I'm late seeing this because of the holidays, but I throughly enjoyed it. It is important to stop and celebrate each step of the writing process and I thank you for the reminder, Jenny. Love your writing closet, BTW...mine is a drafty little kitchen nook:)

It's never too late to drop by and leave a comment!

I hope your nook isn't too drafty :).