A Rose Before Dying is out!

This is it, my second book in the Second Sons mystery series is out! I’m exhausted but very, very pleased. Year ago, I came up with this concept of an inquiry agency manned by all those “spare” second sons who aren’t the heirs and are left with the clergy or military for careers. What if none of those alternatives appealed to them? What if they were willing to give up their social status and had an insatiable curiosity about their fellow human beings? A position as an inquiry agent might just be the ticket!
My first book, The Vital Principle, was finally released in February. That book introduced Knighton 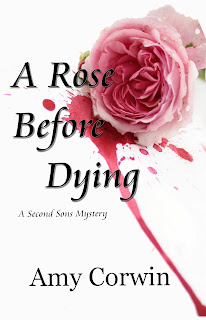 Gaunt, the founder of Second Sons Inquiry Agency (Discreet Inquiries). He was featured in a previous book in the Archer family series, I Bid One American, but he gets a starring role in The Vital Principle.
In the new book, A Rose Before Dying, Charles Vance, the Earl of Castlemoor takes the lead with an assist from Mr. Gaunt. Charles is not an inquiry agent, but when his uncle is accused of murder, he steps in to find the person responsible for killing his uncle’s ex-paramour, Lady Banks, and leaving a rose behind with a taunting note.
A Rose Before Dying let me combine my research into the history of the rose with a classic British mystery and I’m deeply grateful to all the footwork done by rosarians including: Graham Stuart Thomas,
David Austin, Peter Beales. Their books were invaluable, not to mention the gorgeous new English shrub roses David Austin is hybridizing these days. I have several of his roses in my garden and they are lovely as well as hardy. In fact, their books got me started on growing Old Garden roses and they are truly a delight.
The early years of the 19th century saw an explosion in exploration, with hundreds of new plants being discovered. Roses from China were brought to England and hybridization efforts began, since the China roses had one important difference: they bloomed all season rather than once a season, i.e. they were remontent. The development of the classic florist’s rose, the Hybrid Tea, is a direct result of hybridizing 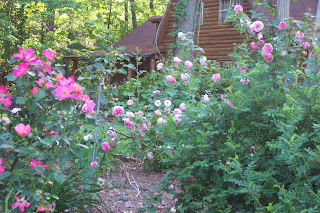 European roses with the China rose. Pretty exciting stuff! So I couldn’t resist casting a female character as a rosarian involved in the efforts to cross China and European roses.
In A Rose Before Dying, Vance must seek out a rosarian to help him identify roses the murderer has left as clues, and he finds Ariadne Wellfleet, a woman trying to live independently and pursue the 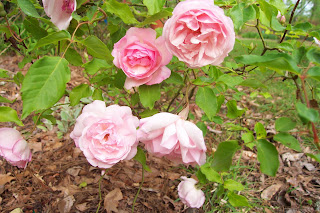 development of new rose hybrids. Unfortunately, the men in her life are bent on helping her to conform to the more standard feminine role as wife, despite her resistance. Her involvement in the murder investigation puts her—and the members of her household—directly in the murderer’s path.

It's a classic British mystery that I hope all mystery fans will enjoy!
Have a great weekend!
Posted by Amy at 5:58 AM