I love to get the inside scoop on how other writers tackle their research and writing tasks--there's a lot more work to writing fiction than you might imagine. So I'm very happy to have Mary Reed as a guest, to talk about how to mislead readers. :) As you might imagine, this is a skill that all mystery writers must cultivate. 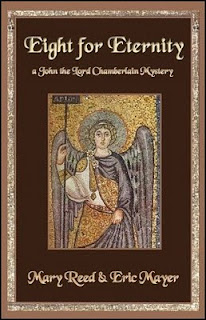 It's been my experience that as soon as someone hears my accent they haul out the kettle and teapot and ask if I take milk and sugar.

This sort of kind gesture to a visitor leads me to thoughts on how to mislead readers by utilising their expectations of a particular type of character in an underhanded way.

Readers tend to expect him to be a red-faced choleric individual who talks of pig-sticking, regimental messes, and hill stations. His conversation will be punctuated by words such as punkah wallah and tiffin and if married he will refer to his wife as his memsahib. He will doubtless vote Conservative and when serving on the magistrate's bench will fine poachers heavily.

But what if our colonel is spending his retirement working on a volume of philosophical reflections, heartily dislikes Indian cuisine, never wears his medals or attends regimental reunions, prefers his furniture to be in the style of the Arts and Crafts Movement, and thinks women should have the vote?

Quite a different character emerges! Certainly an unusual specimen of his class, easily misunderstood by those -- including the detective -- who would tend to assume that a man of his social position and history would possess certain traits.

But they would be wrong, especially if he is the leading culprit.

To avoid spoilers by revealing those responsible for crimes, as a demonstration of use of misdirection in character expectation consider Agatha Christie's Miss Marple.

Miss Jane Marple appears to be the model for everyone's favourite elderly aunt. She's twittery and fluffy, fond of knitting and gardening, at times somewhat vague. But under that cosy exterior she has an incisive mind and excellent deductive ability, often based upon her superb grasp of the worst aspects of human behaviour from observation over the years of incidents involving her fellow villagers in St Mary Mead.
Christie's Belgian detective Hercule Hercule Poroit in fact to some extent knowingly takes advantage of misleading expectations. To outward appearances he is a fastidious dandy with a comical mode of speech, zealous devotion to an outlandish moustache, and at times, alas, a boastful nature. Those who see only the outward man often regard him as an merely a vain, idiot foreigner and react accordingly. Poirot sometimes misleads by playing up to these expectations -- to the extent of bending the truth at times -- to obtain the information he needs to complete his deductions.

As another example closer to home, the investigations of our protagonist John, Lord Chamberlain to Emperor Justinian, take place in sixth century Constantinople and its imperial court.

John is a eunuch, a condition that is historically correct for one holding his high office.

Whatever readers initially assume a eunuch to be, we feel it's unlikely they will have visualised a lean, inscrutable former mercenary handy with the blade if need be, an austere man with no taste for luxury or rich foods despite living on the grounds of the Great Palace. There is much more to his character, of course, but his condition is what readers tend to react to when first encountering him. And for the record, on those occasions when it must be mentioned we treat it in a matter of fact way, just as John himself does.

Returning to my introduction to this blog, I should add that I rarely drink tea although as a guest I am happy to imbibe it when it's made specially for me since I appreciate the kind gesture.

But at home it's always black coffee with no sugar.
Mary Reed

My daughter married an Englishman. His mother and I always laugh when we are together because I never drink anything but tea and she sticks strictly to coffee. So much for sterotypes.

Hi Donna!
Mary wanted to let you know that she was thrilled to hear from you. She got a kick out of reading aboutyour daughter's marriage to an Englishman, though the mystery remains vis-a-vis his home town!