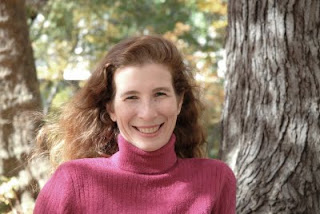 Please help me welcome romantic mystery writer Alina Adams! She is doing some phenomenal stuff with combining various forms of entertainment and has a fantastic new mystery involving figure skating. So I won't waste any more of your time, here is Alina!
Confessions of a Writer…
By Alina Adams
As a writer, I have a deep, dark confession to make.
I like television.
A lot.

When I moved to the United States at the age of seven without speaking a word of English, television was there; offering entertainment, friendship, and remedial reading lessons.

No one was too surprised when I ended up working in television.

The fact that I also write books seems to throw some people for a loop, though.

It really shouldn’t. Often, I would read while watching television. (It takes a lot to keep me entertained). And I certainly did my homework with the TV on. (Who doesn’t?)

Professionally, I kept my careers pretty separate. I wrote romance novels for AVON and DELL while also writing and producing soap segments for ABC Daytime and the Daytime Emmy Awards. The closest my two worlds came to overlapping was when I used my experience as a television researcher for ABC, ESPN, NBC and TNT’s figure skating coverage to set the background for my series of Figure Skating Mysteries (Berkley Prime Crime).

While working for Procter & Gamble productions, I wrote tie-in books for their TV properties, “As The World Turns” and “Guiding Light.” I also developed a website for them, http://www.anotherworldtoday.com/ , where I combined vintage clips from their soap opera, “Another World,” with fresh written content.

If I could do it for them, why couldn’t I do it for myself?

Especially now that, with the advent of iPhones and iPads and assorted other, non-Apple products, it’s possible to both read an e-book and watch a video at the same time. (Kind of like when I’d do my homework in front of the TV! See, Mom and Dad, I told you it would be a useful skill…. Someday.)

I was going to build an enhanced e-book. Even if no one was quite sure what precisely that was, yet.

Simon & Schuster gave it a try, debuting the Vook (www.vook.com). They offered mostly non-fiction titles, along with a romance by Jude Deveraux and a thriller by Richard Doetsch. (Other fiction titles they just enhanced with non-fictional elements, like authors talking about their books, historical documents, etc…)

But none of those were precisely what I was looking for.

So, I decided to make up my own genre. Because I’m like that. (An obvious side-effect of too much reading and watching TV simultaneously.) 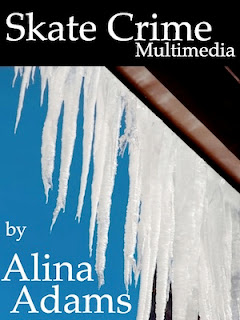 In cooperation with The Ice Theatre of New York (http://www.icetheatre.org/ ), I took an excerpt from my fifth mystery, “Skate Crime,” and enhanced it with videos that actually (I hope) contribute to the story.

And when I say I did it, I mean my husband, the MIT-educated engineer, did it. I just stood over his shoulder and said, “No, not like that. That’s not it. Nope, not that either,” until he finally read my mind and built what I wanted. (I’m like that, too.)

Is it the wave of the future?

I’ll tell you the truth: I have no idea.

I’ll tell you another truth: Neither does anyone else. (And if they say they do, they’re either lying, or whistling into the wind, hoping to hold onto their jobs until retirement.)

Despite the millions of iPads touted sold, we still haven’t hit a tipping point of people looking for enhanced content in their books.

Will that day ever come?

See my answer above.

But, then again, I’m betting that it will. I intend to enhance all five of my Figure Skating Mysteries, as well as my romance novels.

I’m taking a chance (kind of like my parents did when I was seven years old and they decided to pick up and leave the Soviet Union for America; sight unseen)…. Who’s with me?

A bit about Alina:
Alina Adams has written NYT Best-selling soap-opera tie-ins, figure skating mysteries, Regency and contemporary romances, and non-fiction. She can be reached through her website, http://www.alinaadams.com/ . “Skate Crime: Multimedia” is available through Amazon.com.
----
Thanks, Alina! All I can say is...wow!
I'm really looking forward to the future because I think there are going to be more and more entertainment "products" coming out that combine the best of reading and visual media (e.g. television/movies). This is only the beginning!
Posted by Amy at 3:00 AM