I'm a fan of Debra Purdy Kong, so I was thrilled when she agreed to join me and blog about the research she did for her mysteries. Many readers don't realize how much background work authors do to write even the simplest novel. I blame this on authors like Debra. Her books appear effortless, which is the hallmark of a good writer who did a great deal of research.


Researching the Hard Way
To say that I’m not a prolific writer would be an understatement. My first Casey Holland novel, The Opposite of Dark, took twelve drafts and about that many years to write. Mind you, I was working, raising a family and writing two other novels as well as short stories, articles, and personal essays. 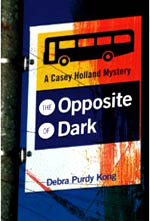 The idea for The Opposite of Dark actually came twenty-five years ago, while I was working a temporary secretarial job for a public bus company here in British Columbia. I remember typing away when a young woman walked in wearing a black leather jacket and mini-skirt, and high heels. In the mid-eighties this definitely wasn’t an acceptable dress code, but I quickly learned that she was working as an undercover security officer for the bus company.

As years passed, I never forgot that woman or her work, so when I was ready to create a new mystery series, I decided to put my protagonist in security. After the seventh or eighth draft, I decided to learn more about the security business to add authenticity to my story. So, at age 53, I answered an ad in the paper for security officers from a company that paid for training.

With some trepidation, I called them up and asked if they could use someone my age. The answer was yes. Apparently, my maturity and work experience was an asset. It proved to be true, as I was assigned to a university campus where young women and female staff often felt more comfortable with women officers, particularly if we had to patrol locker rooms or dorms for a specific reason. I also worked in the communications office, dispatching security officers to different incidents and coordinating with the paramedics and firefighters during emergencies.

After landing a contract with my publisher, I left security work to write full time, but I have to say that I kind of miss security. I learned a lot, and although some might think I’d taken a tough approach to research, the paychecks certainly came in handy. The basic security training I took, including conflict prevention and resolution, is the same that Casey would have taken. Casey, however, is much more of an in-your-face, rule-breaker than I was, but she’s also a lot more interesting.

Since I intended The Opposite of Dark to be the first in a series, I wanted readers to learn about Casey’s family background, as it plays a huge role in the decisions she makes in future professional and personal relationships. In this book, Casey is informed by the police that her father has been murdered in his West Vancouver home. The problem is that she buried her dad three years earlier in an open-casket ceremony in front of a lot of witnesses. Once more, her dad never owned a home in West Vancouver, but he’d always dreamed of one. And so begins Casey’s adventures.

You can visit Debra on the web at: http://www.debrapurdykong.com/index.html

More info about The Opposite of Dark can be found from the publisher at http://bit.ly/i983XE
From amazon.com at www.tinyurl.com/2frw58u  or
From chapters/indo and on Kobo at http://bit.ly/gtFSFw
Posted by Amy at 3:23 AM

Casey is informed by the police that her father has been murdered in his West Vancouver home. The problem is that she buried her dad three years earlier in an open-casket ceremony in front of a lot of witnesses. Once more, her dad never owned a home in West Vancouver, but he’d always dreamed of one. And so begins Casey’s adventures. Oh, What a suspenseful book THE OPPOSITE OF DARK has to be. Another book I would love to read. Finally finished the judging and can get back to reading the books that i am looking forward to reading including yours Amy.
Keep Liily Gayle in your prayers. She is under the weather.
Thanks and Hugs!
Rebecca

Thanks so much for your review and comments--I always enjoy hearing from you!