Hi all!
Well, it certainly has been a long time since I posted anything, and you may just assume all the normal excuses. It recently occurred to me that I might write more if I just wrote about things I was interested in at the moment. Which is precisely what I probably shouldn't do, since this is supposed to be a blog about my journey as a writer. But as you can see, if I stick solely to that topic, well...

Have I stopped journeying as a writer?
No. In fact, I just finished the rough draft for a novel which is the third in the Stainton Sisters triology, written for Scarsdale Publishing. (It's actually late, but that's my problem.) Like most of my other books, the triology is set during the first half of the 19th century--and I say that, rather than the Regency Period, because I actually stray past the end of the Regency. And again, like my other books, there's a bit of a mystery, or even murder, mixed in with the sweet romance.

Okay, I admit it, I write "sweet" or "clean" romances or whatever term you want to use to describe books where there is a happy ending without all the hot-and-heavy action in the bedroom.

So anyway, I finished all the drafts for the Stainton Sisters, now I just need to get everything edited and sent to the publisher. Phew.

That was a difficult challenge because I'm homeless and have been since around February. Voluntarily homeless, that is. Because we were living in an old log home that we really loved, but it was rotting around us, filled with mold, and we had to do something. It broke my heart, but we finally got it bulldozed and are having a new house built in its place. Sigh. The new house is sort of plain looking--a regular house, in fact--but we're building it "for our old age." It will have modern conveniences such as air conditioning (which will be nice for a change in dealing with Southern summers) and water shut-off valves. I know--?water shut-off valves? Well, just try fixing a plumbing leak without any valves in the entire house. You just have to shut water off to the entire house.

We are hoping to move back in by the end of July, fingers crossed. 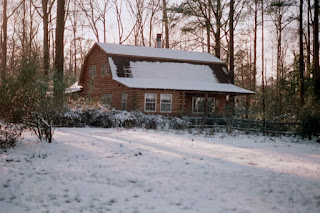 It won't be to everyone's taste, I'm sure, but my husband and I are rather fond of warm, rustic houses, so I've included a view of the den with the big fireplace (it will have gas logs). I was standing in the kitchen when I took this picture of the den. 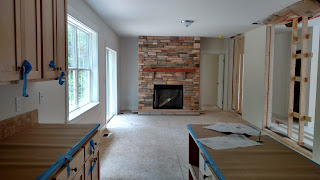 Then, standing in the den, I took the picture below of the kitchen. It's a big kitchen. I cook a lot. Unfortunately, you can't see my nice quartz counters because they are covered by cardboard to protect them while they work on the rest of the house. The flooring has yet to be installed. 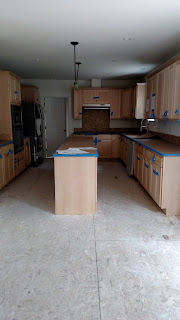 Everything will be as "easy-care" as we can make it, since my husband and I aren't getting any younger. I actually had them install another door in the master bedroom so that I can take the dirty clothes and linens from our bedroom straight into the laundry room. And we have a nice, big walk-in shower with a bench where we can rest our tired bones and let the water cascade over us.
The project was a huge undertaking--a lot more work than either of us anticipated--but in the end we hope it will be worth it. One good thing, I've noticed that my cough has disappeared (allergies) since the old log home was "done away with."

Unfortunately, since my telescope is packed away with most of my other belongings, I've been suffering from a severe case of astronomy withdrawal. I've been using my binoculars, instead, to look at the night sky, but I really miss my close up views of galaxies, nebulae, stars, and our planets. 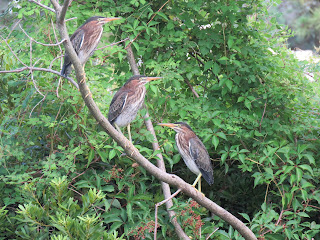 In the meantime, I've been doing a lot more birding (bird-watching). We have a tiny cottage on a bay where I've been camping out, waiting for our new house, and to my delight, we have a pair of Green Herons nest there! Five juveniles hatched out in May, and I've been taking pictures and watching them do fascinating things like dipping small twigs into the water of our pond to attract the minnows to eat.
I got one photo of three of the juveniles (3 out of the 5) before they left our pond to find their own places to forage. The adults, or at least some adults, were still hanging around the pond. 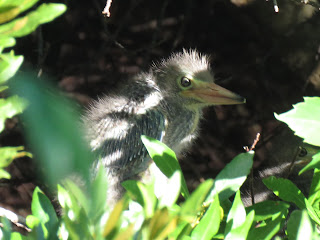 To my surprise, yesterday I realized we have another active nest! I don't know if it is a second pair of adults and they were just late nesting, or if it's the first pair of adults with a second brood. In any event, I got some pictures of the fuzzy little cuties. Here is one of them. It appears to be about 16 days old, which is when they start moving around more.
When you look at them, you really begin to see the relationship between birds and the dinosaurs.
Anyway, so that's what's been going on with me lately. When my Stainton Sisters triology comes out, I'll be sure to let you know. Although don't be surprised if my blogs are more geared toward nature and astronomy. And even living conditions (laughing wildly).