Ta-da! Love Lost, the third story in the Stainton Sisters trilogy is done. Well, not exactly done, but the major writing effort is completed. It just needs to go through my three editors now, and then Grace Stainton will have her story. Phew. It's a little late, especially since I still need to get it edited, but at least I am making progress.

These three stories will be launched by Scarsdale Publishers, and the trilogy follows the trials, tribulations, and mysteries the Stainton sisters stumble into after their father passes away. Three very lonely young ladies must find their own way as the 19th century pushes forward from the Regency into the Victorian era.

Only Friends - Martha Stainton
Martha, the bespectacled middle sister, is thrust right into the middle of a mystery by her old friend, Lord Ashbourne, much to Martha's annoyance. While Martha is trying to prepare herself for a life as an unwanted spinster in her aunt's London household, Lord Ashbourne seems more than happy to waste her time and talents as a chemist to uncover the real cause of Mr. Alford's dramatic death during a supper party given by the local magistrate, Sir Horace. Martha is convinced that Lord Ashbourne and she are only friends, unaware that he has other ideas, altogether, and his plans don't include her traveling to London any time soon.

A Debt Paid - Dorothy Stainton
As the eldest daughter, Dorothy takes it upon herself to ensure the happiness of the youngest Stainton sister, Grace, when they arrive at their aunt's home in London. Unfortunately, her aunt has plans for Dorothy, that rest upon Dorothy's marriage to Lord Arundell. Rumors abound that Arundell murdered his older brother and his brother's family in order to obtain the title, and Dorothy isn't shy about refusing until she realizes that if she doesn't marry Lord Arundell, her younger sister might be thrust into the fray in her place. So Dorothy reluctantly agrees to the arrangement to protect her sister and is soon involved in the strange mystery surrounding the handsome Earl of Arundell.

Love Lost - Grace Stainton
For months, Grace had believed she would soon return to her village of Kendle and marry the kind, but poor curate, Mr. Blyth. But then she receives a letter from her sister with the news that Mr. Blyth is planning to marry a rich heiress. Having discovered she is due to inherit a small amount from a distant aunt, Grace hurries to Kendle to see Mr. Blyth, only to arrive too late. Mr. Blyth is dead--newly dead, in fact--and she is found cradling his body by the brother of the heiress Blyth was to marry! She is forthwith accused of murdering Mr. Blyth in a fit of jealous rage, and despite his suspicions and loyalty to his bereaved sister, Lord Glanville seems to be Grace's only ally. But can she trust him to help her prove her innocence, or is he simply working to trap her into an admission of guilt?

No release dates or covers yet, though I will share those as soon as I get them.

Now... As I mentioned on my previous blog, there is a lot going on around here. Our new house is still under construction (it was supposed to be finished in June, but we'd rather things be right than done quickly). We have a fabulous screened in back porch where I expect we shall be spending a lot of our time. They've gotten the floors installed, but there are a lot of little things, like the fact that they installed the wrong oven (I wanted a double oven, not a microwave and oven combo) and small details like a bad electrical outlet in the kitchen. And the doorbell doesn't work. And they haven't installed the commodes yet. Or completed the siding on the gable above the tiny front porch. Sigh. 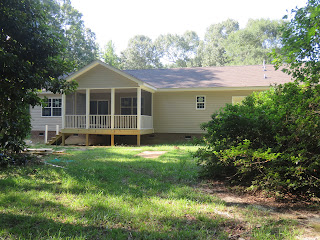 Lots to do still. I'm just hoping to move in by at least Labor Day. I was hoping to take advantage of any Labor Day sales to buy things like the washer and dryer and any new furniture we'll need. Like a sofa. Our old sofa was completely worn out, so we got rid of it when our old house was demolished.

It is so strange to see the new house where the old one was. It's sort of sad--I know we will miss the old log home--but it's also a huge relief to have a house where hopefully, everything will actually work. And we will have real airconditioning and even heating. Imagine! Airconditioning! In the hot, humid South! Wow. And no rotten walls or crumbling support beams. Or buckling fireplace. Makes it all seem almost worthwhile.

In the meantime, for breaks between frenzies of writing, I'm monitoring the progress of our Green Herons. As I mentioned, we had one brood hatch and disperse, and now we have a second brood. 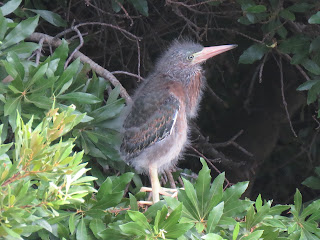 Here is what the second batch looked like just 7 days ago... It is truly shocking how quickly they grow. Their down is pushed out by "regular feathers" and before you know it, they can fly and disperse to other feeding grounds. Fortunately, there are all kinds of salt marshes around here, so there are plenty of places for them to go when they are ready to go their own way.

This second batch only has 3 babies instead of the 5 of the first bunch, but they are doing very well 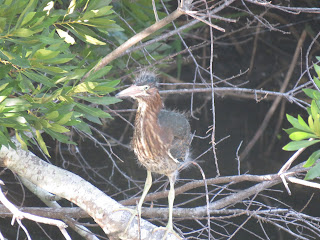 and are really growing. The babies--juveniles, now--have very little down left. There are just a few tufts of down on their heads and here-and-there on their bodies, and they are as big (or bigger) than their poor parents (who are working themselves to death feeding the cheeky little dears). Juveniles from the first brood still come by to visit once in a while, but the parents of the current batch don't particularly care for them hanging around and try to scare them off. Unfortunately, the juveniles pretty much just ignore the parents of the new clutch. Typical teenagers.

Here is what the second batch look like, now. I couldn't resist taking the second picture, since the little guy had just awakened from a little siesta after its dad came to feed him (or her). 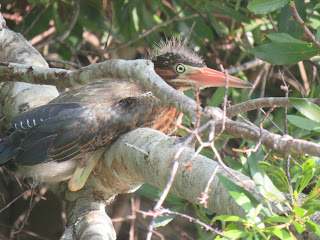 other birds, including two Prothonotary Warblers and Orchard Orioles. We even have a Yellow-bellied Slider Turtle bobbing around in the depths--which means the pond must be more "fresh" than brackish or salt-water as it was, originally. Way back in the last century (i.e. 1960 or so) our pond was a boat basin. But over the years, Mother Nature has shifted the beach around and closed up the entrance to the basin, and hurricanes and rain have turned the water from salt-water to brackish to whatever it is now. We even had a bullfrog for a while, though I have seen/heard him for a couple of weeks, so maybe one of the herons got him.

Thought I'd add a picture of one of our pretty little Prothonotary Warblers, too. They are a "ray of sunshine" for sure. 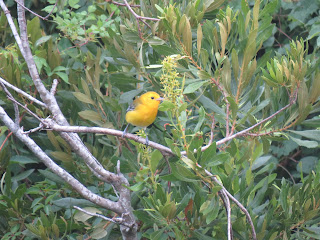 Anyway, it's been a real "hot spot" for birds in the neighborhood. We get all kinds of birds coming to check out the vines and trees around the pond. Barn Swallows and Purple Martins regularly swoop down to get a beak full of water "in flight" and I've seen cardinals, sparrows of all kinds, doves, and other birds hanging around the vegetation. We were going to clean out some of the dead wood and vines, but I've decided to leave it "as is" because it attracts so much wildlife. The herons love perching on the dead snags, as do the warblers and orioles.

Just so this isn't all about birds, here is a picture of our Yellow-bellied Slider, too. 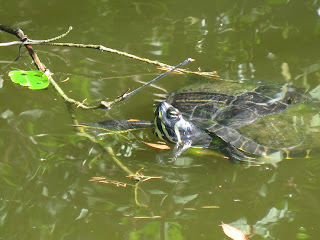 It's a magical spot, and I feel privileged to have it on our property where I can watch the life-cycles of birds like the Green Herons.

Hope you are enjoying your summer and doing a lot of reading!
Amy