I'm not a great chef or anything, but sometimes even the most mediocre cook comes up with a recipe worth sharing. This one is actually "adapted" from GRIT Magazine's special baking issue they put out a while back. It included a great section on sourdough and since I'm a sourdough fanatic, (I have had well, digestive problems all my life to put it nicely, and eating sourdough fixed me up perfectly. I wish I'd discovered this simple solution sooner.) I made almost all the recipes. They were all excellent, and I really liked the biscuit one because it was quick and used a cast iron pan. I have a large collection of cast iron and use it almost exclusively except when I need a non-reactive pan for something.

The only problem was that the recipe in the magazine made too many biscuits for me and my husband, even eating leftovers the next day or so.

So the first thing I did was to cut the recipe in half. That worked okay, but in the days that followed, I made a few other changes. One change came about because the only honey I had was some really good honey with the comb in the bottle.

I also developed this because I wasn't using my sourdough starter every day and yet didn't always want to keep it in the refrigerator. And I'm cheap and didn't want to keep throwing away starter. Since the sourdough helps me digestive-wise, I found that making biscuits everyday used enough starter to keep it going on my counter without wasting it, and it gives us good biscuits for breakfast.

Anyway, here is the recipe. It makes about 9 biscuits and you finally have a use for that small cast iron skillet that you thought was only good for frying an egg. That's the one that is  6.5" but 8" will also work. NOTE: I've never tried this in a pan other than cast iron and I don't think it would come out as well in plain aluminum or glass.

This recipe takes about an hour, all told, when you count in collecting the ingredients, mixing, rising, and baking. 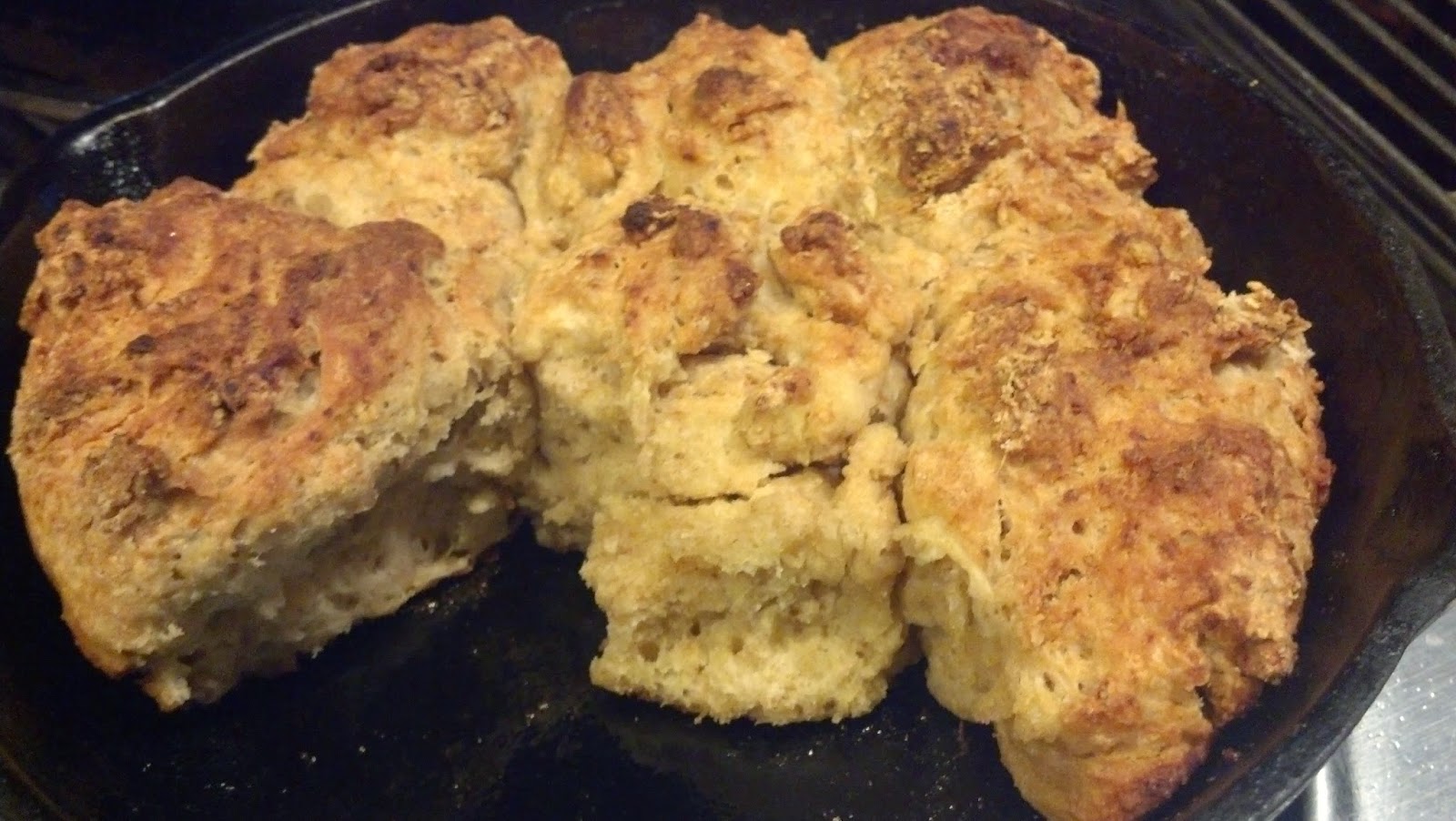 NOTES - Sourdough - This is a variable. If you keep your starter on the "thick" side (like puffy, risen dough) then you may need to add a teaspoon or so of water. The recipe depends upon the sourdough starter for moisture. You should be able to work in all the flour--it will be a very stiff dough--but if you can't, your sourdough starter may simply be too "thick" so a small bit of extra water may help.

Honeycomb - If you scrap your teaspoon over the honeycomb as you get the honey out of the jar, you'll get little bits of the comb. We find that this gives the biscuits a bit of a chewiness and extra honey flavor that we really like. You don't have to do this, but we really like it. You may like less honey in your biscuits or no honeycomb scrapings.

Butter - You can use either salted or unsalted. The salted butter will make it less sweet and more like a biscuit. The unsalted will bring out the honey notes and make a sweeter biscuit. Using margarine isn't worth it (in my humble opinion). The flavor and crumb just aren't the same.

Ingredients - The measurements are not exact. In fact, I just use a regular spoon and sprinkle in what I think looks good for the baking powder, salt, butter, and honey. The recipe is VERY forgiving so you can get a little sloppy with the measurements and it will still come out well. I also tend to use an exceedingly generous cup of sourdough starter, fed or unfed.

If you want to add wheat germ, too, put 2 Tbsp of wheat germ into your 1/2 cup measuring cup and then fill it the rest of the way with the whole wheat flour.

The whole wheat and wheat germ combination is actually my favorite way to make these biscuits as the whole wheat goes really well with the honey. In fact, that is the kind of biscuit that is in the picture.

If you want your biscuits to look smoother, you can shape them a bit (not too much as it will melt the bits of butter) and smooth them into egg shapes before putting them in the skillet. I prefer not to mess with them too much and I like the crinkly/crunchy top.

Another variation
You can also add about 1/2 tsp of honey to the melted butter which you drizzle over the biscuits before baking. This gives them extra sweetness.

I made the mistake, once, of baking them far too long. This made them very crunchy, but oddly enough, my husband really liked those as a snack. ha, ha. They were almost like big, round crackers.

So like I said, this recipe is very, VERY forgiving even if you over-bake them.

I imagine you can add just about anything you want to them, as well. Raisins are great and make them more "breakfast-y" and almost like scones. Dried berries are also great.

If you have any left the next day, you can put them in the microwave for up to 30 seconds to make them soft and warm.

There you are: Honeycomb Sourdough Biscuits. Enjoy!
Posted by Amy at 12:23 PM