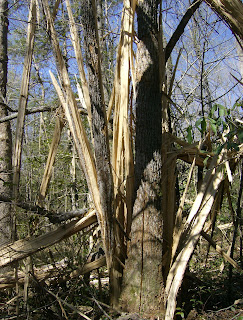 About a week ago, we had a terrible storm during the night. At 4:00AM we heard a loud boom that rattled the entire house. We live in a log home and have actually weathered hurricanes and trees hitting the house with only the merest thump. This time, the house really did shake so we knew there had to have been an explosion of some kind. We figured lightning had struck somewhere close, very close, and were afraid it was our power line. Thankfully, this was not so. 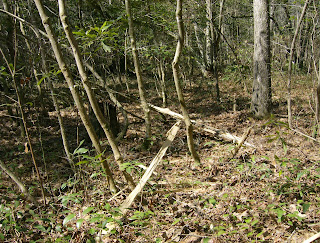 The next day, we checked the trees around the house to make sure none of them had been struck for fear the tree would die and then come crashing down on the house. All the trees in the immediate vicinity appeared fine, however. 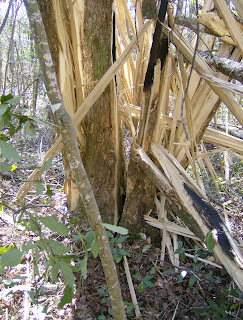 Then today, we were taking the dogs for a walk through our woods and found the lightning strike. The sight was awesome in the sense of "awe inspiring." I had never seen anything like it in my life. A huge tree had been struck and literally exploded into fragments, some of which were littered as far away as 100 feet. Many of the jagged, spear-like fragments were stuck in the ground and you can only imagine what would have happened had you been foolish enough to be within 100 feet of that tree when it exploded.

From examining it, we saw the charred area about four feet off the ground where the lightning hit. The heat of the strike immediately boiled the moisture in the tree and the steam created so much pressure that it blew the tree apart, as if the tree had been a pressure cooker without a safety valve. It looked like someone had stuck an explosive into the tree and set it off. The thick trunk was split to the ground and the top was blown completely off and landed next to what remained of the stump, still upright and leaning against the shredded remains of the trunk. 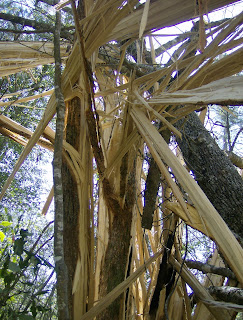 So the next time you even THINK about taking shelter anywhere near a tree, I encourage you to think again. Most experts tell you to take shelter in a building or a car (cars have rubber tires, after all) and I think that's pretty darn good advice at this point.

The really amazing thing to me is how a previously healthy, mature tree was so completely split apart into matchsticks. (Okay, they are giant matchsticks, for sure, but the fragments scattered everywhere in the woods did look like matchsticks.)

I am also pleased that this happened before birds started nesting this spring. We did not find any "bodies" of any critters, which was a relief to me (although evidently a disappointment to the dogs). 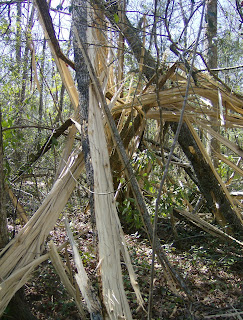 One must never forget the power of nature. Lightning is obviously nothing to "fool around with."


On a cheerful note, I'm watching my latest book, The Unwanted Heiress, creep up the Amazon ebook charts and it looks like it is a success to me. :) That will give me some bucks to do some planting and I think a few more trees may be in order. 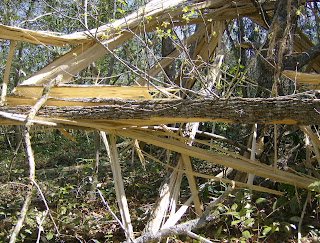