Baking Bread
When I finally retired to enable me to concentrate on just one job, my writing, I realized that I could finally get back to doing what I used to do: baking my own bread. While I'm willing to eat pre-sliced "store bread" as toast, I've always disliked it for almost everything else and especially sandwiches. Maybe I got spoiled when I was a kid and my grandma baked bread at least once a week and taught me how to do the same. Maybe I'm just hopelessly picky. Deli bread is okay, but somehow, it just can't match the flavor of bread you make yourself. 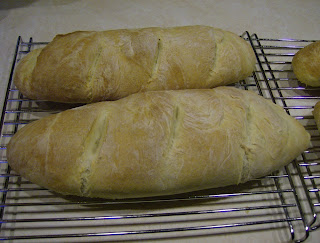 So today I baked four loaves of French bread so I could freeze two and we could finish up the week with crusty, fresh bread. French bread is one of the easiest breads to make: the list of ingredients is very short (basically flour, yeast, water, shortening, salt and sugar for the yeast to eat) and it bakes very quickly. The only tricky thing is getting a good crust, which you do by spritzing the bread with water and having a pan of water in the oven during the first 15 minutes of baking.

My tip for French bread, though, is to get one of those foil lasagna pans and use that for your water reservoir in the oven (you can put it on a cookie sheet to stabilize it). The reason? If you make a lot of French bread, over time, any pan you use to hold the water will build up a white crust as the water evaporates out of the pan during baking. This is ugly and can be difficult to remove, so I just keep a foil pan that I use over and over again. While it has built up white scale, that's fine with me since this is all I use it for and when it gets too yucky, I'll use it in the garden to hold paper pots of seedlings. When it won't work for that any longer, well, I guess it can make the final trip to the dumpster.

This batch of French bread is by no means my last for this week. On Saturday, I plan on baking a couple of loaves of bread with wheat germ and oatmeal added to the flour for a more rustic and nutty tasting loaf. My husband prefers the French bread, but I like a little variety and the wheat germ really adds wonderful flavor. I also plan on making some sourdough starter because I love sourdough bread and am dying to make some sourdough French bread. My husband hates sourdough, but as I tell him, "Then don't eat it." LOL

I'd forgotten how much fun it is to make--and eat--my own bread! It's wonderful to have time again to do so.

What Was For Dinner 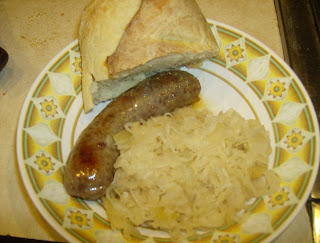 What was for dinner with the French bread? Bratwurst and sauerkraut! Yummy and women are supposed to eat lots of sauerkraut and other cabbage dishes, so it worked out great for me.

Hope you had a great dinner and will think about making your own bread. You won't believe the flavor and its a lot of fun. I find the kneading very soothing.

And Let's Not Forget The Writing
One of my publishers contacted me and asked if I could write a 20,000 word Regency romance, right now. LOL. It is extremely hard for me to write something "on demand" and quickly, in fact, my biggest "flops" were created under those conditions, but I'm going to give it a shot.

In the meantime, my paranormal romance, A Fall of Silver, is available now in almost any ebook format through Amazon and Smashwords.

A Fall of Silver 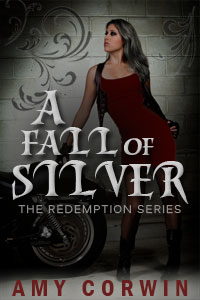 Allison “Quicksilver” Bankes has a simple philosophy is: the only good vampire is a dead vampire. After a brutal encounter with the undead, Quicksilver wants revenge and she’s about to kill one of the undead to save a young woman’s life when Kethan Hilliard confronts her. Kethan promises peace and redemption for both vampires and humans in exchange for an end to the slaughter, but Quicksilver knows that’s not going to happen.

Someone is killing both humans and vampires, and sweet words aren’t going to end the nightmare.

As events spiral out of control, terrible secrets from Quicksilver’s past awaken, and she’s forced to turn to Kethan to survive. Kethan and Quicksilver may have opposing goals concerning the undead, but neither can deny the attraction growing between them that threatens their everything they hold dear. However, Quicksilver is determined not to make the same mistakes twice, and with Kethan’s help, she hopes to silence the horror, forever.

Enjoy your evening!
Posted by Amy at 6:15 PM