Untangling The Knot by Deanne Wilstead 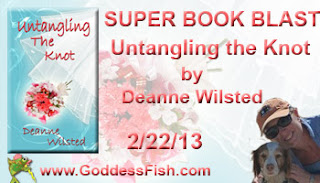 Twenty-eight year old Gabriella Bessu is St. Therese’s meticulous wedding ceremony coordinator. So the fact that she has mistakenly signed her newest couple up for an annulment, rather than a wedding, sends her Catholic guilt into overdrive.

But who can blame her? The groom is gorgeous and his two kids tug at Gabriella’s heart in a way that overcomes all her best intentions. Before long she’s in over her head, fixing her mixed-up plans and helping the children and dad come to terms with their haunting grief for the mother and wife they lost years earlier. 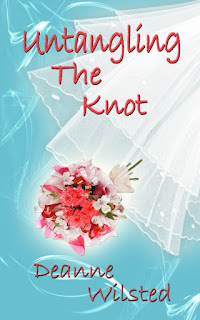 Can Gabriella untangle her own fears and accept the messy life that God has handed them?

The last thing Ryan had expected to see when he’d entered the cottage was Gabriella flat on her back in a puddle of water, inspecting the rear of the toilet. Chloe was holding a bucket and a sopping wet towel, and Peter was nowhere to be seen.

“Dad!” Peter came flying from another room and flung himself into Ryan’s arms.
“RYAN?” Gabriella yelled and quickly sat up. The thump of her head smacking the toilet bowl echoed around the tiny room.

Ryan grimaced. Gabriella sat on the wet floor, near tears, rubbing at the welt already forming on her forehead.

“I’m sorry,” she said, clearly at the end of her rope. “I can’t believe I said that in front of the kids. It’s just, everything has gone wrong today.”

She hung her head in her lap and began to cry for real.

Ryan had to hold back a smile. She looked so much like a wet cat. And, to top it off, she had yet to hear how wrong things had really gone with the day.

Chloe’s face lit up with an expression he hadn’t seen in years. For a few moments at least he was back to being her superhero dad.

With an English teacher for a mom, DEANNE WILSTED, grew up reciting conjugation instead of nursery rhymes. Now, forty years later, she's sharing that special skill through her writing and her mothering. Her first book, a contemporary romance called BETTING JESSICA, was released October 2011. Her second Novel, UNTANGLING THE KNOT, is due out in February 2013 from Soul Mate Publishing. She is currently marketing her third book for publication and writing her fourth, fifth and sixth while blogging about the crazy stuff she overhears while writing.

CONTEST:
Please be sure to enter our contest via Rafflecopter for a chance to win one of our prizes! 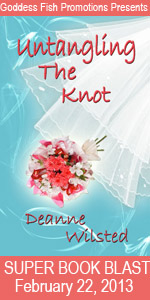 Hi Amy, thanks so much for hosting me on your site. I'm looking forward to hearing your readers comments, so I'll check back and reply.

In the wanted to say a huge thanks for sharing the journey.

I'm happy to oblige and I apologize for the delay.