My favorite time of the year for bird watching (birding) is winter. You don't have to contend with the heat and insects and you can see everything much better since leaves don't get in the way so much. When I ended my career as a computer specialist on Dec 31st in favor of writing full time, one of the things I hoped to do was to get back into doing more birding.

Thankfully, I have and here are a few of the glorious birds I've been seeing in our walks to the mailbox with the dogs and rambling through the woods (okay, swamp) behind the house. 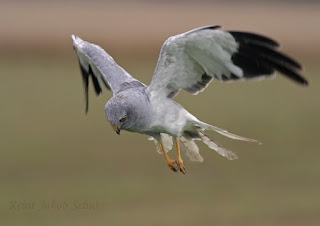 Northern Harrier - We've had both male and female Norther Harriers working the fields in front of the house. When I first spotted the male "gray ghost" he was hovering low over the winter wheat before starting to glide back and forth dissecting the field in his search for rodents. The brown female has been here less, but one or the other is always working the fields.

American Kestrel - Every winter, an American Kestrel takes up residence on our phone line, right above the mailbox. From that position, he has a good view of four fields and it must suit him because he's there every day until late spring.

Red-tailed Hawk - A pair of Red-tailed Hawks lives near our house and this time of year, we hear them calling almost all day. They seem to like to hunt the fringes of the fields along the tree line.

Red-shouldered Hawk - In addition to the Red-tailed Hawks, we have a pair of Red-shouldered Hawks. We hear (and see) them a little less frequently, but at least once a day I hear them calling. They seem to like to cross over the entire expanse of fields, going from one swampy woodlands, over the fields, and then entering the woods behind our house.

Honestly, with all these predators, I don't see how the rodents have much of a chance in the area, but we still see a lot of voles, cotton rats, and mice, so I guess they aren't putting too much of a "hurtin/" on the population. 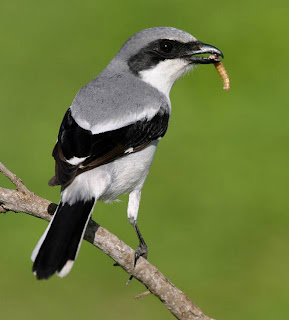 Loggerhead Shrike - We are very privileged to host the occasional Loggerhead Shrike, which upon first glance I often mistake for a Mockingbird with "something just not quite right" about it. The shrike has a favorite perch on a telephone line near a small stand of trees at the edge of our property. I've only seen him twice in the last week, but he does seem to be hanging around the area.

Belted Kingfisher - A very noisy, female Belted Kingfisher has decided to take ownership of our catfish pond. She gets highly indignant when the dogs or one of us humans takes a walk and dares to go near the water. She's a chatty little thing and she's a gorgeous sight swooping low over the water on her way back and forth over the pond.

Turkey - As part of his job, my husband worked on the reintroduction of Turkeys here in North Carolina and his work was a brilliant success. We now see large flocks of Turkeys wandering the fields and I've had to stop short in the car several times to avoid hitting them!

Bobwhite - A small covey of Bobwhite hung around after breeding season and when we walk to the mailbox, we flush the occasional one out of the weeds at the sides of the roads. We've been trying for years to get the farmers to stop mowing the hedgerows, or at least only mow one side. This year, we've still got one side of weedy cover and I'm hoping they don't mow it anytime soon because it's always full of all kinds of birds.

Gosh, I can see I need to stop doing a paragraph a bird or this blog is going to drag on. So what else are we seeing?

Meadowlarks, American Robins, and Eastern Bluebirds are all over the fields, as well as flocks of blackbirds and grackles (mostly Common Grackle and Boat-tailed Grackle). The hedgerows that the Bobwhite like are also full of Chipping Sparrows, White-throated Sparrows, Song Sparrows, with occasional visits from Fox Sparrows and White-crowned Sparrows. Near the feeders we also get a few American Tree Sparrows and Field Sparrows. We also have a few Yellow-rumped Warblers (Myrtle Warbler), Eastern Phoebes, and Pine Warblers hanging around the pecan and pine trees near our mailbox.

Pileated Woodpeckers, Downy Woodpeckers, Flickers, and Hairy Woodpeckers are having a banner year because we've had several trees fall in the woods, creating snags that are full of insects. I've also spotted a Hermit Thrush in the woods behind the house, busily at work kicking up dead leaves.

On our porch, we've had Cardinals and Carolina Wrens peering into our front window, particularly when we've dared to let the feeders get a little low on food. The Carolina Wrens are also in the habit of stealing dog food if they think they can get away with it during the dog's feeding melee. 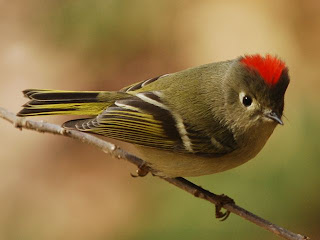 I'm sure I'm forgetting some birds that I've seen this week, but it's a joy to have the time to go out walking with the dogs and my binoculars. You just never know what you will see next!
Posted by Amy at 10:34 AM

The birds are gorgeous! Thanks for sharing the photos.

Hi!
I'm glad you liked the post. It really is fun to go birding in the winter because you can see more. If you like birds, you should try it. :)