It's Summer and Time for Roses 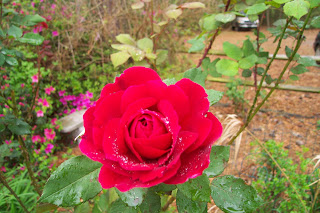 I can't resist writing about roses, as you probably figured out in my last blog. :) Gardening is the best way I know to relax and yet accomplish something while your mind broods over your latest novel and what twists you can possibly feed into your story.

This time, I thought I would talk about the Queen of the rose shows: Hybrid Teas.

So...Hybrid Tea roses. These are the classic rose most people today think of when they hear the word ‘rose’.  They are also sometimes called Large-flowered Roses.  It’s the rose you get for your sweetheart from the florist, and it’s the rose that wins the awards of Queen, King and Princess in rose shows.  There is a wide variety of color in this rose class, every color except true blue and black, and they all have large, stiffly petaled flowers and very long stems.  They have been the most popular class of rose for over a hundred years because of their ability to rebloom through the spring, summer and fall season.

The first Hybrid Tea Rose is considered to be ‘La ’ which was introduced in 1867 by Guillot, a Lyons-based firm in .  The parentage is not documented, but it is thought to be a cross between a Hybrid Perpetual and a Tea Rose.  Interestingly, this rose was classed as a Hybrid Perpetual for many years until the newer Hybrid Tea nomenclature caught on.

Because this is such a large class of roses with more being bred every day, it is nearly impossible to provide an adequate description of the class since growth, foliage, bloom form, color and fragrance all differ from rose to rose.  With the exception of the 5-petaled single form of the Hybrid Tea, most are high-pointed “florist” roses and generally considered their most beautiful in the half-opened stage of the blossom.  This is in direct contrast to older roses which are most beautiful when fully opened.

However, it is still fairly safe to provide the following list of characteristics.

{  Blooms are carried on long stems, often with a single bloom at the end of the stem.
{  Roses have high-pointed centers with large, thick petals.
{  New growth is often reddish tinged.
{  Roses rebloom fairly well (thanks to their forbearers).
{  Colors include the full spectrum of whites, pinks, red, purple, mauve, yellow, orange, with a variety of blends.  The only colors not available are true blue and black.
{  Disease resistance varies from highly susceptible to black spot and mildew to very disease resistant.
{  Size varies from small bushes up to large climbing forms.
{  Fragrance varies from none to a rich rose perfume.

There are a great many Hybrid Tea Roses to chose from and some are even quite healthy when grown organically without sprays.

A small selection of Hybrid Tea Roses that are healthy and can be grown with organic gardening methods include the following.

{  ‘Dainty Bess’ is a silvery pink, single rose (5 petals) with beautiful deep red stamens.  It grows between 3-4’ tall and has a slight fragrance.
{  ‘Peace’ is a famous rose brought to market after WWII.  It’s a beautiful blend of yellow with pink edges and is fragrant.
{  ‘La ’ is the rose that started it all, and it is still an excellent garden plant.  The blooms are soft, silvery pink and it is fragrant.
{  ‘Mister Lincoln’ is a reliable, dark red rose with a good fragrance and excellent health.  It is also widely available. 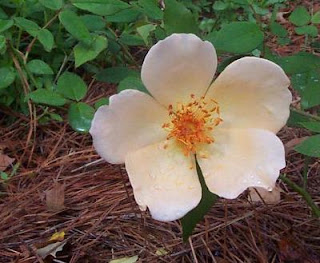 When you have bought a few more roses and planted them all, what should you do? Why, read a book! And if you're a fan of light Regency romances with a bit of humor and mystery, you can settle down with Escaping Notice, the latest in the Archer family series. 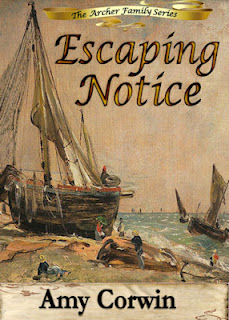 Escaping Notice
Discarded by his betrothed with a parting sally that “being an earl does not excuse being a bore,” Hugh Castle, the Earl of Monnow, joins his brother on a relaxing cruise, hoping to forget. But a storm capsizes their boat, and despite Hugh’s desperate efforts, he can’t save his brother’s life. Then, when the wreckage reveals evidence of sabotage, he realizes he was never meant to return to dock. Someone intending to murder the earl killed his younger brother, instead. Angered and grieving, Hugh travels to London to enlist the aid of the Second Sons Inquiry Agency in finding his brother’s murderer.

Helen Archer attended the Earl of Monnow’s ball in expectation of joining the celebration for his betrothal, but the event seems destined for disaster. She arrives late, the earl makes no announcement, and Helen manages to lose the fabled (but cursed) Peckham necklace her sister reluctantly loaned to her. Unwilling to admit her carelessness to her sister, Helen rashly decides to return to the earl’s estate and retrieve it in secret.

When his aunt threatens to send him to the Earl of Monnow, his purportedly cruel uncle, Edward Leigh-Brown decides he’s had enough of female interference. He’s going to join the navy and follow in Lord Nelson’s footsteps to become a military hero. But finding his way to London is a lot harder for a young boy than it seems, and he’s soon lost. When he bumps into Miss Helen Archer at an inn, he’s more than happy to accept a ride in her carriage, even if she seems determined to escort him to an inquiry agency to hire someone to locate the family he doesn’t want located.

When the three meet in London at Second Sons, Helen impulsively decides to accompany Hugh to the earl’s home. They will be disguised as servants and free to pursue their secret goals. Hugh hopes to uncover a killer, Helen hopes to find her necklace, and Edward just hopes he can find the opportunity to escape again.

But they are soon engulfed in an adventure none of them anticipated, and Hugh must hurry to identify who wants him dead before their deception ends in the death of another innocent.