And now for something completely different...Roses! 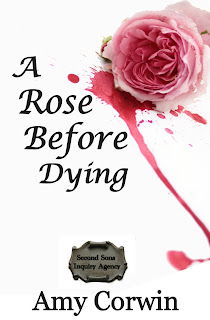 When I'm not writing books, I'm gardening, and somehow or other, I stumbled into roses. Ouch. When I started growing roses, I discovered the old garden varieties grew best for me and I became increasingly intrigued by the history of roses. In fact, I became so engrossed in roses that I even included them in several of my books, including Smuggled Rose and A Rose Before Dying.

Below are some of my notes about roses and their fascinating history. I hope you enjoy it and perhaps discover a few old garden roses you'd like to try out in your garden.

ANCIENT TIMES
I'm not the only one fascinated by roses.  This flower has been described, and treatises written about how to grow roses by many ancient writers, including:
·         The Greek, Theophrastus
·         The Romans, Varro, Columella, Palladius, and Pliny.
·         The entire fourth chapter of Pliny's 20th book on Natural History is devoted to the rose.

Roses were used among the Greeks, Romans, Egyptians and others in their religious, public, and even their private lives.  The Romans apparently preferred to propagate roses by cuttings, since this yielded blooming plants much more quickly than raising them by seed.

Many of the Roman and Greek writers refer to the roses of , which according to Virgil and Pliny, bloomed semi-annually.  Some historians assert that this rose has died out, although others say it may be or may be related to the Autumn Damask rose. 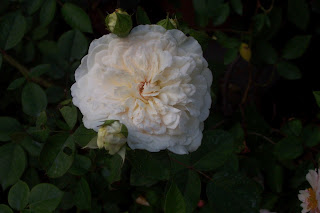 The number of rose varieties may have been limited in ancient times to a few spring/summer blooming varieties, but they had a lot of "tricks" to get them to bloom in off seasons.  Pliny wrote that in , the roses could be forced to bloom in the winter, and then the roses of bloomed next, followed by those of and lastly , which flowered in the spring and again in the fall.  The species, whatever it may have been, that bloomed in may be the one used by the gardeners in Seneca's time in to force in warm-green-houses or retard blooming by withholding water at certain periods.

Nero was so extravagant that it is recorded that at one fete alone he spend more than four million sesterces, or one hundred thousand dollars (probably more now, due to inflation) in roses alone.  The roses were used to wreath their crowns, for garlands, and to cover their tables, couches and the ground.  They used them to surround the urns containing the ashes of the dead.

Heliogabalus used so many rose petals at his banquet that some were suffocated on their couches.

Lucius Aurelius Verus had a couch made with four cushions made of very fine net, and filled with rose petals.
Rosalia is a Roman feast celebrating the rose, held each year on May 23.

A rose suspended over a Roman banqueting couch was used to indicate to guests that the conversation was sub rosa and therefore, confidential.  This convention was maintained well into the Middle Ages.

Romans often got their winter's supply of roses from Egypt, but eventually learned how to produce roses in winter through the use of green-houses heated by pipes filled with hot water.  During the reign of Domitian, this process for forcing roses in winter was so successful that they looked down with scorn on anyone who continued to import roses from .

Roses were cultivated in , and throughout the East for many purposes, including perfume.  One method of preserving the flower was to take a reed, split it down a short distance, stuff it with rose-buds and then bind with papyrus to prevent the scent from escaping.  They felt this method could preserve the perfume for a time, if they wished to preserve it while they traveled.

In order to ship roses, the Egyptians in and sent roses in vases and boxes which were planted with roses.  They were shipped at the point just when the roses are beginning to break from the bud, in order to arrive in at the most beautiful time when they are expanding.  The journey was estimated to take 20 days.  No one is sure what roses were grown by the Egyptians.  The French, when they explored , found the white rose (an Alba) and the Centifolia.  Speculation exists that the Autumn Damask might also have been grown.

The earliest rose concoctions were Greek in origin.  They steeped rose petals in olive or vegetable oil.  Later they learned that slowly heating rose petals in water could produce rose water, but it doesn't smell very strongly because not all of the oils in the rose can be dissolved in hot water.

In or , they discovered how to distill rose petals:  boil rose petals in water, collect the steam, cool it and you have 'attar of rose'.  Although this is stronger than rose water, it still doesn't last long.  But this is still a key component in perfume.  It takes an acre of roses to produce one lb of attar.

Greeks often planted garlic near the roots of roses and thought this helped the fragrance. 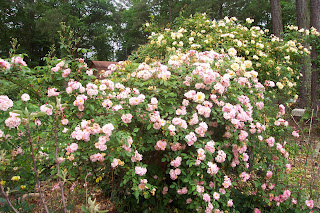 The really means the Isle of Roses and the Medals of Rhodes have on the reverse side a rose in bloom and on the front, a sunflower.

In the East, the author Abu-Abdallah-ebu-el-Fazel described four roses:  the Double White with more than 100 petals; the Yellow; the Purple; and the flesh-colored which is the most common of them all.  He also says that the number of species is large, with the Mountain or Wild; the Double which is variegated with red and white shades; and the Chinese.  The Double, he says, is the most beautiful and have 40-50 petals.

The Moors in loved roses and reportedly multiplied them through suckers, cuttings, budding and grafting, so these methods are indeed old.  One Moorish author indicated the following as a method to for a rose to bloom in autumn:


Choose one which is used to periodical waterings, then deprive it of water entirely during the heat of the summer, until August, and then give it an abundance of moisture.  This will hasten its growth and cause the expansion of flowers with great profusion, without impairing its ability to bloom the next spring as usual.

Or, a second method:  In October, burn the old branches to the ground, moisten the soil for 8 days and then stop watering.  Alternate periods of moisture and drought as many as five times and in 60 days, or before the end of autumn, the roots will have thrown out vigorous branches which will be loaded with blooms, without impairing the plant's ability to bloom again in the spring.

, , and Fayoum in all cultivated the rose for distilled oil or rose essence.  was also famous for its rose gardens and the commercial cultivation of the rose.  Of all the countries, though, was preeminent for roses during the 14th through 20th century.


MIDDLE AGES
Roses were widely cultivated in the Middle Ages and often worn by knights at tournaments as the emblem of their devotion to grace and beauty.

By the 8th century, the Emperor Charlemagne (742-814) issued a decree that all cities would plant roses in their public gardens, as they were thought to have medicinal value.

The Crusades introduced new roses into , including new strains of Damask and Gallica roses.  Devout pilgrims to the Holy Lands often brought back roses as well.

When Saladin retook from the Christians in 1187 (3rd Crusade) he ordered 500 camel-loads of rosewater from to purify the Mosque of Omar. 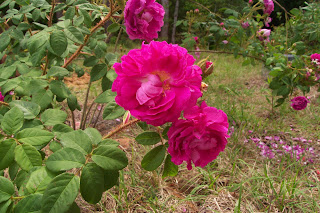 Then there was the famous War of the Roses and its use of roses as emblems for the houses--something created by Shakespeare, by the way.  A red rose for the Lancaster and a white for the .  The house most certainly used either the 'Alba Maxima' or 'Alba Semiplena' for their rose.  The red is more difficult, but could have been the Apothecary's Rose.

In in 1402, Sir William Clopton granted to Thomas Smyth a piece of ground called Dokmedwe, in Haustede, for the annual payment of a rose to Sir William and his heirs, in lieu of all services.

The demand for roses was so great in that bushels of them were frequently passed by vassals to their lords in and .

Among the New Year gifts to Queen Mary in 1556 was a bottle of rose-water.

In an account of a grant of a great part of Ely House, Holborne, by the Bishop of Ely, to Christopher Hatton, for twenty-one years, the tenant covenants to pay, on midsummer-day, a red rose for the gate-house and garden, and for the ground (fourteen acres) ten loads of hay and ten pounds per annum; the Bishop reserving to himself and successors free access through the gate-house for walking in the gardens and gathering twenty bushels of roses yearly.


RENAISSANCE
By the Renaissance, the Dutch and Flemish painters discovered roses and painted the lovely Centifolia.  If a rich buyer wanted a yellow "Rose of Provence" (Centifolia) they could certainly have one!  (Even if it didn't exist in nature!)

Micholas Culpeper (1616-54) prescribed a dry conserve of rose hips from canina for weakness, and a conserve of "sugar of rose" to help digestion.  Cuttings of the Gallica Rose 'the Apothocary's Rose' or 'Officinalis' were often tucked away by goodwives and others for medicinal purposes.

Mary Lawrance's work, A collection of Roses from Nature (the first monograph on roses) in 1795 listed nearly 90 roses.

Pierre-Joseph Redoute published Les Roses between 1817 and 1824, and expanded the list of cultivated roses to nearly 170.  The is probably the most famous and influential work on roses.

By 1848, some 1,500 different roses were listed, described, and offered for sale by William Paul's "The Rose Garden" catalogue.  There were nearly 800 Alba, Centifolia, Moss, Damask, and Gallica Roses.  But, by the time of the 10th edition in 1910, this list of old roses fell to below 90 roses or around 20%, and the bulk of the roses were now as we know them:  Hybrid Teas and other remontent classes.

This is obviously just a glimpse of the history, but at least it shows you what a valuable and wonderful plant the rose truly is.  Can you imagine being able to lease land by just allowing the owner to come and pick roses from the gardens?