There are a lot of different kinds of mystery novels—the cozy mystery, the hard-boiled, the police procedural... Even though they’re different, each one of them delivers a similar enjoyment for the reader.

Mystery novels reassure us that the world makes sense, and that good will triumph. And that an ordinary person has the power to bring about justice.

Order from chaos. We like seeing order come out of chaos. From the raw, unorganized data, the protagonist—whether it's Sherlock Holmes or an amateur sleuth—constructs a coherent narrative.

In a way, we all do this all the time. We ask what strange experiences mean. What explains them? How can we solve the mystery of why things weren't the way we expected?

In a mystery novel, the mystery is more complicated then that. It's often a murder. The clues and the reasoning have to be more complicated, too. But figuring things out is still a familiar activity for people, and a familiar pleasure.

Most kids like mystery novels. (Remember Nancy Drew and Encyclopedia Brown?) Young people are always trying to construct coherent narratives to make sense of the world. A good mystery novel can teach about discovery and reasoning.

Brain exercise. Reasoning is fun. A lot of people like "thinking" puzzles. People do crosswords and sudoko. I used to enjoy those logic puzzle books, myself, especially when I was commuting on the train.

People get satisfaction when they answer an important question, like what's making the dog sick—not just because the dog stops being sick, but because they figured it out themselves. 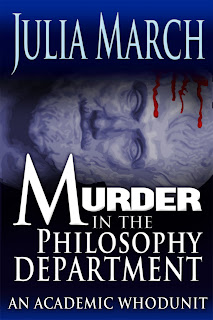 That's why it's so important that the mystery be fair. You don't want the protagonist to say, suddenly, "But what about this?" and hold out a surprise eyewitness or a honking great physical clue that you, the reader, were never privy to.

In a mystery novel, there's often the reward of a revelatory climactic moment, where the sleuth explains all the clues, and how they led to this end.

The process of reasoning has to be revealed to the reader. And it also has to be something the reader could have done.

What the protagonist knows, the reader should know or be able to figure out. The explanation can't be something like "I had a bad feeling he was the murderer. I don't know why; there's just something about the way he looks."

In a mystery, facts are revealed about the victim and criminal. In Murder in the Philosophy Department, it seems almost everyone is hiding some secret—including Liza, the sleuth.

What we want to learn is what caused the murderer to be driven so far as to kill someone. We know it's going to be a dramatic story—we've never been driven so far—and that makes us eager to read it.

Personally, I love a good mystery—and they're as much fun to write as they are to read.

Bio: I worked at a university as a philosophy professor for a period of time. Now I read novels, write novels, and play with my dogs.

Murder in the Philosophy Department

Who killed Niles Norman, the new head of the philosophy department?

When Norman is found murdered in his office, Liza Ryder, a professor of philosophy, offers the police her help. She's worried they won't take academic motives seriously. And she also investigates her colleagues herself.

Liza is horrified by how many motives she finds. Extortion. Deception. Secrets kept since grad school. Will anything be left of the philosophy department when the investigation is over?

* * * * *
Thank you, Julia. I don't know about anyone else, but I think a perfectly good reason to kill a philosophy professor is because they're a professor. And they teach philosophy. I can think of many times when...oh, wait. No. I would never do something like that, or even think it!
LOL
Posted by Amy at 5:53 AM

Sounds like a fun book! Congrats on your release.

Hi Georgie! Thanks so much for leaving a comment, and it's good to hear from you. Hope you're doing well and surviving the summer heat.