Please welcome Jim Franz, a mystery writer with a fascinating angle! I'm pumped to have him on the blog because we are both intrigued by the human mind and "what makes us tick". For good or bad, we both had psychologists in the family, which means endless discussions about nature versus nurture, not to mention experimentation in the realm of parenting. My mother was an ardent follower of Skinner's behavior modification techniques, so the less said about that, the better. LOL

I'm a fan of mysteries where the hero or heroine faces the challenge of a psychological disorder. After all, it's what made Monk on television such a compelling character. But I won't babble on about why psychology interests me...

World Without Faces
Although the main character in World Without Faces is fictional, the disorder he has is very real. It's called prosopagnosia, and it's a neurological condition in which people can't recognize faces.


Imagine going to school or work and being unable to tell who anybody is. You'd never be able to recognize anyone at a supermarket or a high school sports event, nor meet up with friends at a restaurant. 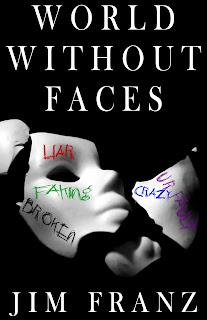 Speaking of friends, how would you make them? If you have a good conversation with somebody at work, the gym, or at a school function, how would you know who they are if you ever wanted to spot them again? How would you maintain that relationship?

Maybe you're thinking we could always ask our husbands or our wives who people are; they cover for us now, anyway! But how would you meet your husband or wife? How would you date? Imagine meeting somebody at a wedding or a party, and you're attracted to them, and they're funny, and things are going well. Then they say they're going to get something to drink, or maybe you're supposed to get the drinks, or one of you has to go to the bathroom. The moment they're out of your sight, you can no longer tell who they are. Will you go up to random people, ask them if you've been hitting it off for the past twenty minutes?

A major problem that people with prosopagnosia face is that they're not blind. It doesn't seem to make sense, does it? How is not being blind a problem? The problem is that the condition is neurological, so other people have no idea about the disorder and will not make allowances for it. If you actually were blind, people would say, "Hey, it's Alex, I'm back." But if you're not blind and you don't acknowledge Alex in a special way, then Alex may feel blown off, and there goes the potential relationship.

Would you tell new people about it? How well do you think that conversation would go? Prosopagnosia is almost completely unknown outside of the medical community. Indeed, unless you're speaking to a neurologist or neuropsychologist, most doctors don't even know it exists. Would a new acquaintance think it makes you sound interesting or that it makes you sound like a freak?

There are tricks people with prosopagnosia can use, and they may not be what you think. Sometimes you can recognize a person's voice, but that only works when the person is talking to you and if their voice is somehow distinctive. Sometimes the person is wearing something unusual or extreme. (There's no research on the subject, but I have a feeling that even people with prosopagnosia can spot Lady Gaga in a crowd!)

In the example of finding somebody again at a party, you might describe the person to yourself by saying something like, "She's 30 years old, brunette with shoulder-length hair, and is wearing black slacks with a white top." If that description matches only one person in the room, then you'll find her. If you see somebody else matching that description, though, you're likely to make a fool out of yourself. If she put on a jacket while you were away, you're done for.

This is the world my main character lives in. Every student, every teacher, every potential friend and enemy are unidentifiable. Worse, he witnesses a murder that he feels compelled to solve. But even if you lived a normal life with prosopagnosia, hopefully without any murders, how would you function day-to-day?

This is such an intriguing concept. I thought I made it hard for my detectives, but I can't imagine the difficulties you'd face if you had this disorder.

I'm so glad you talked about it--and I'm going to get a copy, too!

Thanks for the kind words, Amy, and also for allowing me to visit with you and your readers!