After much banging, disk swapping, and resetting, I finally got my computer running again so that I could post this blog. It's late and should have been posted first thing this morning, but I had a series of glitches that resulted in me putting up a temporary posting until I could pull it together.

I'm relieved and happy to present mystery writer, Frank Scully, author of Resurrection Garden. He's been kind enough to bear with me with good grace and a sense of humor. Therefore, I won't waste any more time. Here's Frank!

Two things really intrigue me - History and Mystery. The history doesn’t have to be ancient, it can be just yesterday or last year. The mystery, of course, has to be full of dire consequences and danger.


When I started writing, I had so many ideas for stories floating around in my head I had to somehow sort them out and decide which I would work on first. It turned out to be a mystery set in 1957 in the Midwest. The second was set in 1995 in California. The third was in 2004 in Europe. And then I wrote Resurrection Garden set in 1904 in North Dakota. I began to see a pattern here. Murder mysteries set in different decades and locations.

And thus was born my Decade Mystery Series. At least one book set in each decade from the beginning of the 20th century to current time set in different locales with both continuing and new characters. There is something unique in each decade that marks it as separate from what went before or what follows. Decades can take radical shifts. The 50’s was the era of the grey flannel suit and the 60’s had the tie dyed hippies. I like to research and explore aspects of what is unique as it is expressed in the locale chosen and how it affects the culture, characters and the tenor of the times and yet also see the common humanity that never changes. While the larger characteristics of the decade provide the background against which the story is told, I like to find certain lesser known events and circumstances that signal significant shifts around which to build the plot.

Resurrection Garden is not a western, nor is it a Victorian mystery. The North Dakota prairie was almost the last frontier for homesteading. Immigrants were arriving daily looking for their chance at the American Dream. Land of their own to farm, to prosper and raise a family. It was hard, rough work in a harsh environment and many failed, even died, in the effort. Communities were new, yet people relied on one another and on the law. 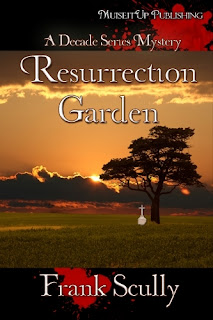 In writing Resurrection Garden, I wove into the story many snippets I culled from my research. Stories straight out the newspaper of the time became part of the backdrop to the mystery and to life as depicted in the novel. Since my own grandparents were settlers in North Dakota in the 1880’s, I also had personal history to draw on for background.

Jake Turner, a scarred veteran of the charge up San Juan Hill, has been a lone drifter through much of the settling of the west. Opportunity was growing out of the newly turned sod of the North Dakota prairie in 1904 when he stopped to take a part time job as a Deputy Sheriff, expecting to move on again when the dark parts of his past catch up to him.

An investigation into a murder of a man hated by everyone has threads that lead to his best friend, Isaac. Jake is ambushed and almost killed, but is nursed back to health by Isaac. While Jake follows the clues into a labyrinth of hatred, sordid crimes and missing money he becomes attached to an eight year old orphaned boy named Andy and falls in love with Isaac’s sister, Alice. After being alone for so long with no hope or care for what tomorrow might bring, Jake finds it difficult to accept these new emotional attachments.

Jake believes in Justice, but before he had only his own life on the line. When Andy is kidnapped and almost killed, Jake knows the killers will do anything to stop him. In order to protect Alice and Andy, he must break their hearts and leave them and North Dakota behind.

Jake knows he’ll be back. So do the killers. Trap and counter trap are laid. Jake knows there will be graves. He just doesn’t know who will be in them.


ISBN: 978-1-926931-04-3
Available from the publisher at: https://museituppublishing.com/bookstore2/
Also available at Amazon, Barnes & Noble, Smashwords and other online eBook retailers.

The Sheriff joined me in my contemplation of the body. It wasn’t pretty. Thor had never been handsome, and the ravages of being frozen under the snow for the winter and having birds and other animals picking away at the skin as the snow thawed and exposed the body made what was left of him downright disgusting.

One thing was evident though. He didn’t die easy. Freezing to death is relatively painless. Wander out in the cold, get lost, fall asleep, and don’t wake up. That wasn’t what happened to Thor.

“What do you think? Shotgun, maybe?” the sheriff asked.

“At least,” I answered. The hole in his chest was big enough to put a fist through. “But why? He musta been dead already when he was shot.”

“Yeah, first someone beat him to a bloody pulp then gutted him and slashed his throat. And then shot him. Ain’t that what you said, Doc.”

“Looks that way to me,” Doc answered. “Can’t tell you much more until he thaws out all the way.”

“Somebody wanted him deader than dead.” The sheriff shook his head.

“Takes some hate to do all that,” Doc commented. “Got any suspects?”

Doc and the Sheriff both turned to face me.

I let out a deep sigh. “I suppose you want me to find out what happened to him.”

“Seems as how you should. After all, you found him, and you’re my deputy up there,” the Sheriff answered.

I stared at Thor and wondered when I would be able to sit down.

Doc came up behind us and commented, “Jake, you might ought to get some new britches or something. You’re hanging out your back end. Probably scare the ladies and kids if you went out in public like that.”

I reached around and felt bare skin crisscrossed with stitches. “Damn, just got these new this Christmas.”

“I’m sure one of the widow ladies you’ve been helping out will be happy to lend you some spare pants.” Doc grinned. “And I’m sure these new scars will get you lots of sympathy and special care.”

“Speaking of widows,” the Sheriff interjected. “You’ll need to tell Mrs. Thorsgaard we found her husband.”

And that’s when the real pain started.


Frank Scully was born at the end of World War II and grew up in a small town in North Dakota. He remembers a time when radio provided the entertainment and then along came TV with very few channels. While in college getting a Bachelor’s degree in History and a Juris Doctor in Law, TV graduated to color, the Beetles landed on the Ed Sullivan Show, Kennedy was assassinated, and Armstrong walked on the moon. He served in the U.S. Army as a Judge Advocate General Corps officer in the U.S., Vietnam and Thailand before getting his Masters in Business Administration from the Thunderbird School and embarking on a business career. Currently he is a Contracts Manager for a major aerospace and defense manufacturer.

Thank you, Frank! (I remember when we got our color television set and we saw Bonanza in color for the first time!)
Posted by Amy at 8:05 PM