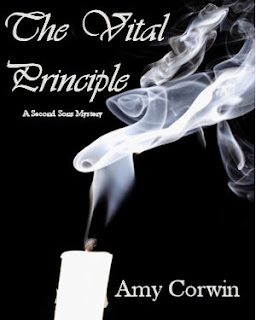 I'm working on the second draft for a historical mystery in my Second Sons Inquiry Agencymystery series and I'm really torn on a cover image. The first book in the series is shown here. It's clean, simple, and the image is relevant to the book.

I'd found the cover image I wanted, an old-fashioned rose with a bit of blood spatter against a white background. It would go well with the first book in the series, which is a white candle with a trail of smoke against a black background.

But then I saw this other image and it was just so cool I'm having a hard time resisting it.

Now, I don't know if I should go for a "series look" the way I originally intended and use the "rose and blood" image or if I should just go with the cool picture because it's cool. 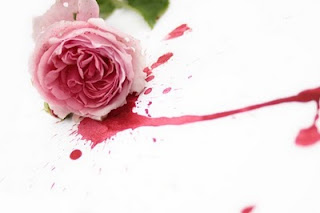 The rose image is probably more appropriate to the book, which is a mystery involving a killer who sends a rose as a taunt to the Second Sons Inquiry Agency each time he's preparing to kill someone. If they can identify the rose correctly, they might be able to identify the victim and save him or her. Hence the image of the rose. That is really what I had in mind as I was writing the book.
But as I said, it's so hard to resist when you find another bright, shiny object elsewhere. This last picture is just so evocative that it's hard for me to resist.
Maybe I should just save it and use it for the third paranormal book I'm planning to write at some point after my latest, A Fall of Silver, is released from The Wild Rose Press. Theresa Blackstone, a secondary character from both my first (Vampire Protector) and second (A Fall of Silver) paranormal romances will be getting her own book. Soon. I just have so many books in so many various stages of planning, writing, and editing that it's hard to keep up. Wish I wasn't wasting so much time on my day job. LOL 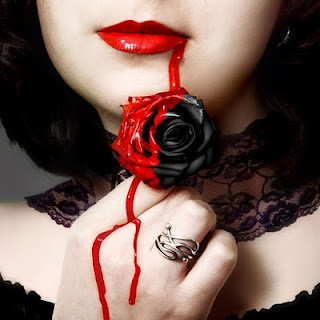 So help me decide! Should I stick with the original image and go for a "series feel" as it fits in with the first cover? Or, since the books really all stand alone and even have different characters (although Knighton Gaunt, the owner/founder of Second Sons does make an appearance in all of them) should I take a more individual approach for the images?

Which cover image would you go for?
Posted by Amy at 11:54 AM

Amy, I'm not sure. But I do think the bottom photo looks too much like a murder/suspense. The pink rose is good, but I'd add something else to picture to make it look more paranormal.

Our Sweetest Romance authors are chatting today at Coffee Time. If you get a chance, drop in. The link is in a post on our loop.

Good luck with your decision.

Hi!
That was actually a lot more helpful than you might imagine, Laurean. The book is a historical mystery with no paranormal element, so that makes me think my original idea of using the rose might have been the appropriate one.

I really appreciate your thoughts.

Hi Amy,
I like the rose. I too thought it looked as though it needed something else, but I bet that's the title of the book.

yes--it definitely needs at least the title and my name :).

I'm glad you responded because it's a bit of a relief to me to know that my intial thoughts may have been right, i.e. that I should stick with the rose as originally intended.

I like the original rose picture that you chose. It's simpler, and therefore more evocative for the reader, than the second picture which leaves less to the imagination. The first is softer, while the second is harder and more tangible.

Thank you Diane--those are astute remarks and just what I needed. Besides, you agree with my initial thoughts and it's hard to resist the logic of someone who agrees with you!

Thank you for taking the time to explain. I am grateful.

I would personally go with the series feel and the first image. The second image is so different from the first that it would look very odd when you place the books together that the reader would wonder if they are the same series.

I can totally relate to the too little line and too much to do problem. Balancing it all can be a challenge. :)

I'm afraid I have to go with the others. I like the rose and think sticking to the series look would be the best idea. I'm sure you'll write another great book to go with the "cool" cover! :-)