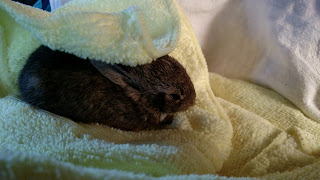 I was hesitant to write about our little orphan, but he's made it for almost 5 days so maybe this won't jinx the whole thing.

So, last Friday, I was walking the dogs when my little Jack Russel stopped in the middle of the road. I went back and, well, she had a bunny in her mouth. I made her drop it, and the poor little thing appeared to be unharmed except for being in shock.

My husband and I took the dogs and scoured the entire place, looking for the rabbit burrow to put the bunny back, because it hadn't even opened its eyes yet. Baby bunnies have a very low survival rate if you take them away from the rest of the litter, and I didn't want the poor little thing to die. No luck, although we searched and kept trying to get the dogs to show us where the bunnies were.

Finally, we had to give up for the night and take the poor thing home. We called a bunch of rehabbers because you're not supposed to keep wild animals, and I wanted to give the thing a chance. No luck. You see, 90% of orphaned bunnies die. Most of the rehabbers had too many other animals and didn't want a baby bunny that was sure to die.

We looked again on Saturday for the burrow. We even tried to find someone who had domestic rabbits with a litter, hoping to slip the baby in with the others. Mammas are great about accepting "strangers."

No luck. So we found the bunny org and because my husband is a wildlife biologist, we looked up rabbits in his literature. Between all the sources, we decided that goat's milk for puppies/kittens plus a bit of heavy cream (8 parts goat's milk to 1 part cream) warmed up would do it. So I went to the Seed & Feed and got goat's milk and a tiny feeding bottle, then got some cream. We prepared everything the way you do for a human baby and fed the beast.

Bunny likes the milk mixture a little on the warm side, but at least he ate. And I rubbed his bottom as recommended to get him to pee and poop, although he seems perfectly capable of pooping on his own because there were droppings in the bucket where he lived in a nest of microfiber rags.

Oh, we kept him in a big bucket hung from the rafters to keep the dogs and cat away from him. It worked for the first night. Unfortunately, he jumped out the second night and roamed around our living room all night. Oops. Fortunately, none of her animals found him. And although he was cold, we fed him and got a cat carrier for him. And I took one of those horseshoe shaped pads you heat up in the microwave for for shoulder/neck muscles and put that in the cat carrier to keep him warm.(Heat lamps are too dehydrating.)

We were trying to mimic his natural environment, which means no heat lamps or anything like that, but a gentle source of warmth like that pad did the trick. He likes it, but frequently hops away from it if he gets too hot And although we were feeding it twice a day, 1.5 tsp (approx), since the mamma rabbit only visits the den rarely to feed her kits (evening and morning) to avoid leaving a scent trail that might lead predators to the den, we did feed our kit a extra time after his "adventure" on our floor, so he got breakfast, lunch and dinner.

So far, (we found him Friday and it is now Tuesday) he seems to be doing okay. We don't mess with him except when I take him out to feed him. Sunday, I started adding probiotics to his bottle in preparation to moving him to greens. Baby rabbits have sterile digestive systems and normally eat their mamma's night poop to get the right flora in their bellies, but we have no mamma, so we're using probiotics.

He started opening his eyes Sunday night and Monday. Today, his eyes are pretty well open and his ears are twitching and upright. That means he's close to being ready to start on greens collected from the yard. He's also getting more nervous of me, which is great, because he needs to be afraid of humans and everything else out there when we release him in 2 - 3 more weeks.

I hope he continues to thrive. We're doing the best we can. I'd like him to be in that 10% of bunnies who do manage to live long enough to be released, and I hope I haven't just jinxed him by writing this. He's a tough little bugger and obviously wants to survive. Today, I'm going to sprout some oat and alfalfa seeds I got for sprouting (I eat a lot of sprouts, myself) as well as sorrel, clover, plantain, sumac, and other goodies I collect around our property. That should give him a variety of things to try as we move him to his normal veggie diet.

I'll update this as he progresses. Let's hope the update(s) don't include a bunny funeral. I can't quite believe he's made it this long after everything that has happened to him. I wish we could have convinced a rehabber to take him (they are all volunteers, unpaid, and overwhelmed this time of year). I'm always afraid I'm going to find him cold and stiff in the cat carrier.

I'm also hesitant to name him because, that also seems like tempting fate, but I think of him as The Little Squirt. And The Little Squirt really wants to live. He's been through a lot and is still hanging in there.

Finally, I don't mean to "pollute" this with crass talk of books, but September/October are exciting months for me. A Lady in Hiding is out, and both A Stolen Rose and Her Vampire Bodyguard will be out in October. So what with The Little Squirt and writing, this fall has been really busy so far. 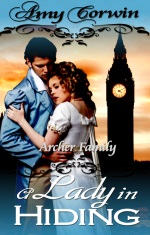 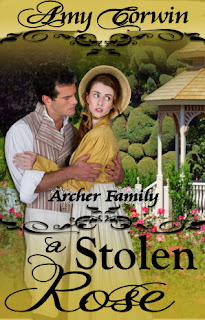 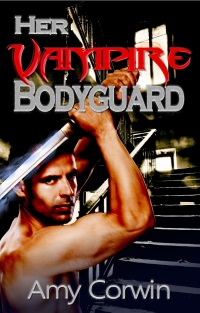