How did they do that - Bread

Making Bread
If you're like me, you love making bread but it never seems to live up to your expectations. You follow the directions, knead it, and do everything right. It rises beautifully and looks great when you take it out of the oven. It tastes good, too, while it's warm. But by the next day, it seems to have gained a pound or two in weight and is hard and/or dry.

At least, that has been my experience until lately. I've been experimenting, though, to make my bread as moist and light on the inside and chewy or crusty on the outside like good bakery bread. And I've had a couple of breakthroughs that I wanted to share.

The first thing I was did was to buy some books on bread making. There are a lot of good books out there and the ones that particularly interested me were those about "no knead" bread. And in a fit of nostalgia around Christmas time, I also got some sourdough starter. Those two things are related in a very important way--just wait. :) 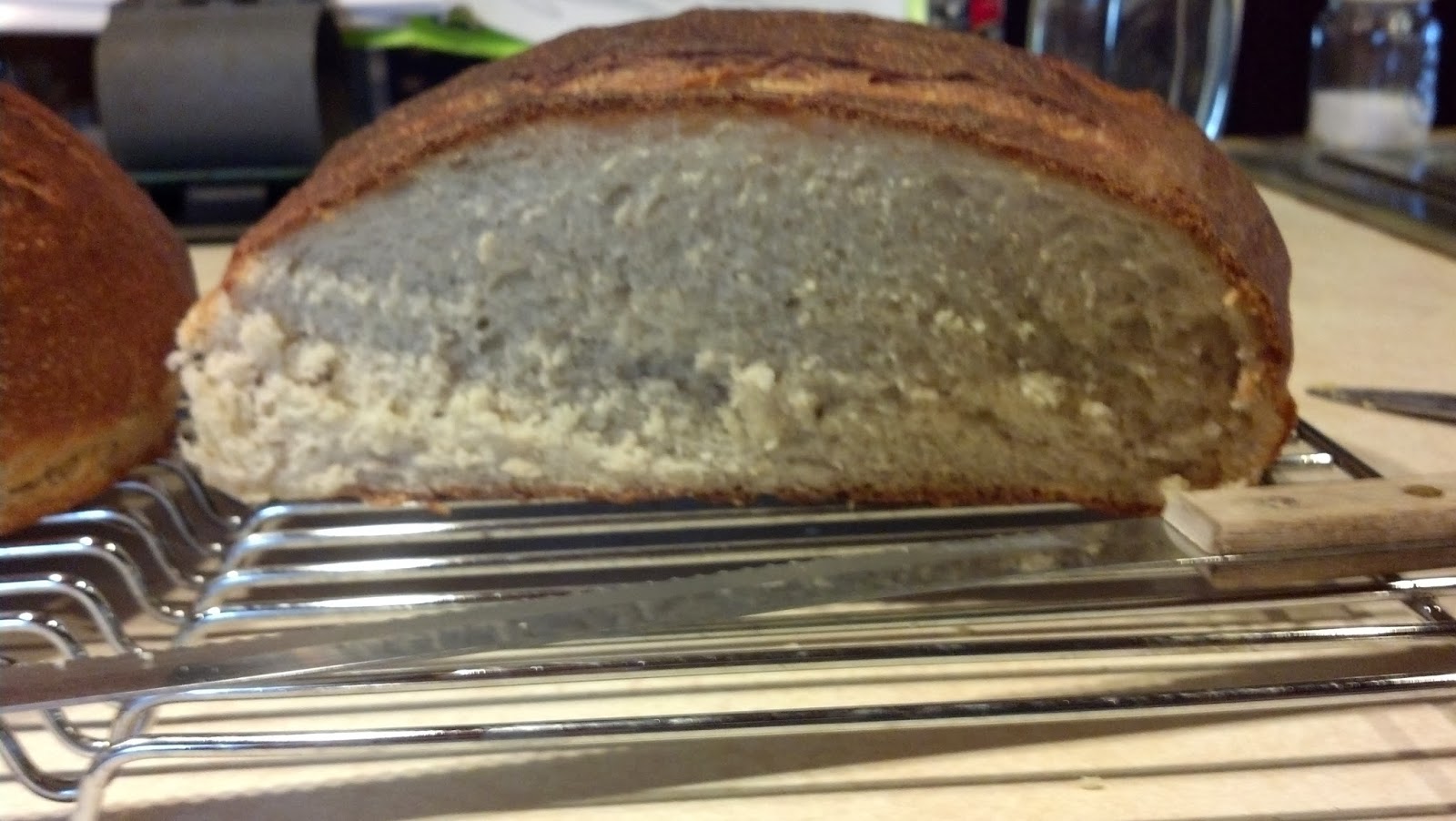 The "gist" of the information in the books that was different than most of the standard bread recipes we all follow from the bags of flour or general cookbooks was the use of a "starter." It can be called barm (as in some books) or starter or whatever you want to call it. As I read all the books, I realized it boiled down to creating a soupy mass that for all intents and purposes was a lot like sourdough starter. It is basically unbleached flour, water, and yeast (either the yeast you get at the store or in the case of sourdough, wild yeast) left to sit and bubble overnight.

That was one piece of the puzzle. 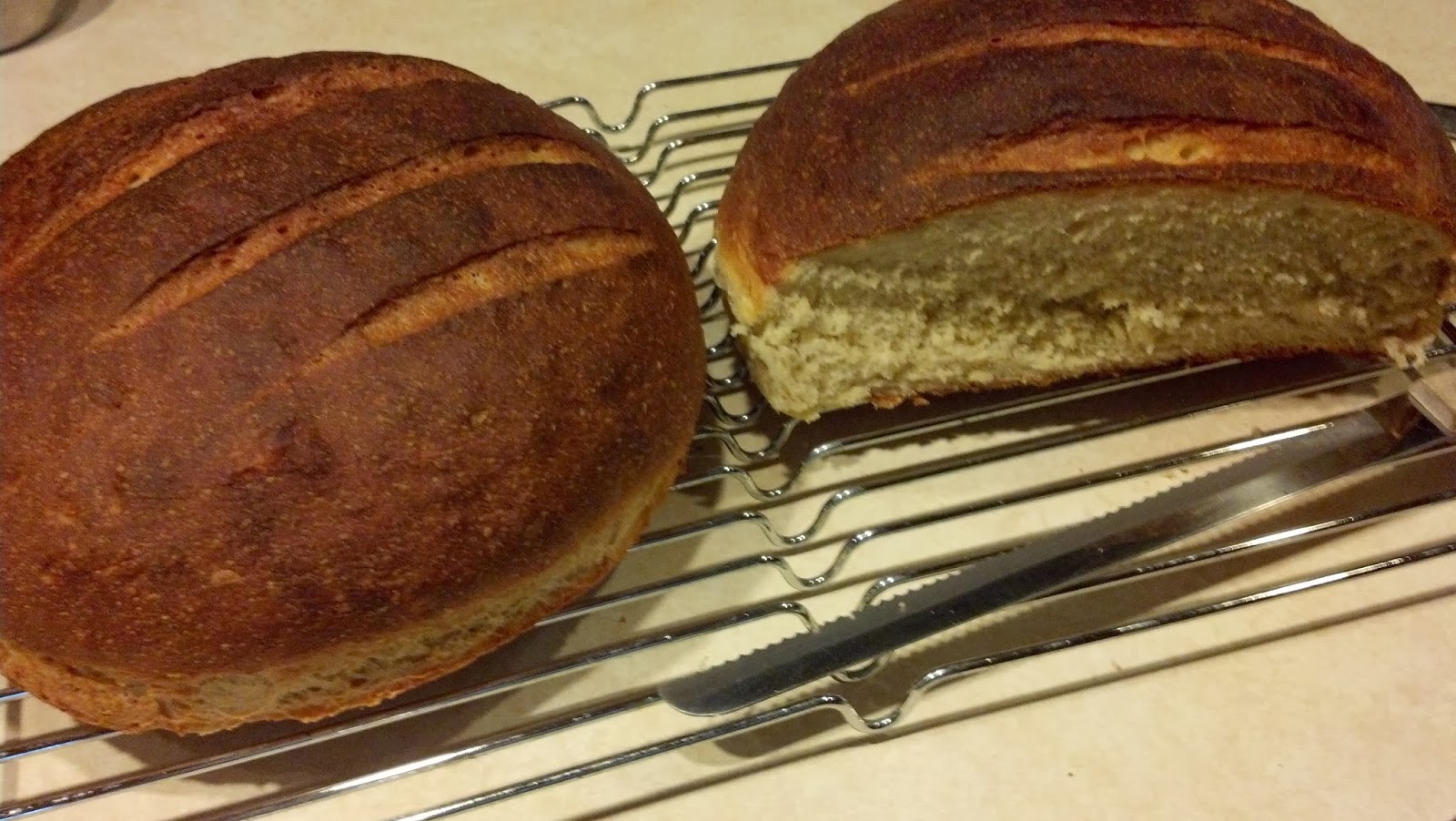 The second piece was using the dough hooks on my standard mixer to knead the bread. I had been kneading by hand because I love doing it. but that meant I ended up adding too much flour in my attempts to keep it from sticking to my work surface and my hands. By using the mixer to do the dirty work, I didn't need to add any more flour during kneading. (I could also use the time freed up by not manually kneading to clean up the kitchen.)

Once I added the use of a starter/barm plus my stand mixer to knead, all of a sudden I could make rolls as light as a dream and crispy-crusted artisan bread that was moist and delicious on the inside. The loaves shown above were from a standard sourdough bread recipe courtesy of Sir Arthur Flour company. The only thing I changed in the recipe was that I substituted 3/4 c. of wheat germ for 3/4 c. of flour.

The flavor is outstanding and what is interesting to me is that it tastes much closer to "bakery bread" than the standard bread recipes I've found on flour packages. There is much rich flavor with more depth, even if you don't use wheat germ.

Personally, I can't imagine baking bread anymore without either using a starter I create from commercially available yeast or from my sourdough starter (it will most likely be the sourdough starter). The difference in the quality of the bread is just amazing.

My next step will be to create a "pseudo bread oven" by cooking my bread in one of my cast iron dutch ovens.

One last thing to add before I move on to the status of my career as a writer: yesterday I had a doctor's appointment. I was sure she was going to yell at me about my triglycerides because I've been eating so much homemade bread lately. In fact, I baked two fruitcakes, two huge almond danish "wreaths" and lots of other stuff over the holidays. My triglycerides were DOWN. Yes, down. And I contribute that to two things: homemade bread and my habit of eating herring a few times a week. I'm becoming convinced that commercial bread is evil. I've been working diligently on a new Second Sons Regency mystery called, "The Illusion of Desire." I had hoped to get it released early in 2014--I still have hopes of that--but it won't be in January. Maybe late February or early March.

In addition to editing that book, I've been writing a new paranormal suspense although a name is still up in the air. "Out of Time" or "Timeless" or something along those lines. I'm only on chapter three so far and it's much lighter in tone than your traditional suspense. Maybe without realizing it I'm creating a new "cozy suspense" genre.

When I finish writing that, I'll be working on the next Second Sons mystery featuring Pru and Knighton in "A Honeymoon with Death." The two are on their honeymoon when they run into trouble--and murder--in Europe. The previous Pru and Knighton, "The Dead Man's View" is doing pretty well so I'd like to get another book with the two sleuths written and published this year. Lots to do, lots to do.

Hope everyone is enjoying the start to a brand new year!