Another day, another recipe 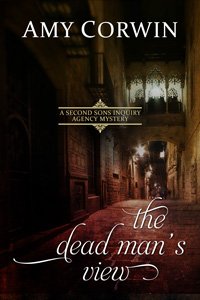 As most of you already realize, there was a delay in the release of The Dead Man's View, the sequel to The Vital Principle, featuring Prudence Barnard and Knighton Gaunt. This time, it's not Pru is not searching to exonerate herself, she's trying to exonerate her dead cousin. She's convinced he did not kill himself and doesn't deserve to have his body beheaded and buried at the crossroads as a suicide. So she calls on her dear friend, Knighton Gaunt, to help her expose the murderer.

While the book's release is late (now set at the first week of October), I
hope it will be well worth the wait.

On to Yummy Stuff
Are any of you trying to reduce carbs? I know I am, simply because as I age, it is getting harder and harder for me to eat them without getting an upset stomach. Since I also have problems with legumes like soy and beans, it can sometimes be a challenge.

But, I've developed a relatively quick breakfast which gives me energy to tackle the morning and is filling enough to get me through to dinnertime with perhaps just a bit of smoked trout to make it past 2:00PM when I start to feel hungry.

I keep a bag of mixed veggies in the freezer and all I do is: 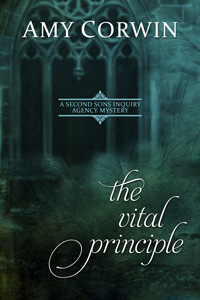 Microwave a cup of mixed veggies for about 4 minutes while I chop up about 1/4 c. of onion.
Saute the onion in olive oil until the veggies are "nuked" and then dump the veggies into the pan.

Take an egg (or two if you're really hungry, but there will probably be enough to share...) and scramble it and then add it to the pan. When it's done, turn off the heat and add about 1/2 c. of shredded cheddar cheese. Mix until the cheese is melted and then dump it out on your plate.

I love topping it with a few spoonfuls of salsa, too. Where's the picture, you ask? Well...it's not the most beautiful concoction on earth so you'll have to use your imagination. :)

Of course, you can really vary this. If I have brown rice or quinoa left over, I add that to the veggies in the pan and don't use any cheese and then sprinkle in some soy sauce. It makes a "quickie" fried rice that is delicious for breakfast.

However, that's really not the recipe I wanted to share today. We've pretty much given up beef (except for the occasional hamburger) and replaced it with venison. I find it more digestible and much more delicate in flavor with a lot less fat. The lack of fat, however, does mean it can be tough if you don't know how to cook it.

Roast Venison
Clean up a venison roast to remove any silver skin or fat. Rub it with a bit of pepper. (I don't use salt, but if you do, you can also add about 1/4 tsp of salt and rub that in.)

Wrap the roast in bacon strips, making sure that all the meat is covered. (You'll remove the bacon to serve.)

Slip the bacon-wrapped roast into an oven bag and place in a shallow backing pan.

Pour red wine (we like Burgundy, but Bordeaux is good, too) into the bag so that it covers the meat until it is about 1/2 to 3/4 covered.

Close the bag with the tie and cut 2 or 3 tiny holes into the bag on top to let it vent a bit. 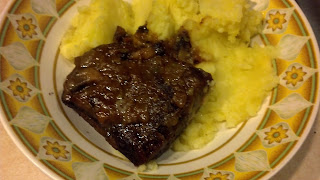 Bake in a 350 degree oven for about 3 hours (or until the meat is very tender).

When the meat done...

Melt 3 TBSP butter in a pan. Add one minced onion and cook until the onion is golden. Add cleaned, cut up mushrooms (I use about 1 - 2 cups) and saute until the mushrooms are almost cooked (about 10 minutes).

Remove the meat from the oven and pour the contents of the bag through a strainer into the pan with the onions and mushrooms. Cook for 5 minutes. Mix a few tsp. of cornstarch into about 1/2 c. of red wine and add that to thicken the onion/mushroom sauce. It will take about 2 - 3 minutes over med/med-high heat.

Serve the meat with mashed potatoes and the sauce. A side salad goes very well with this to make a very easy and yet elegant dinner!