Review of The New Death and Others

The New Death and Others
By James Hutchings

Let me start by saying that I loved this book, but it’s hard to describe exactly what it is because it doesn’t really fit neatly into your standard fiction genres. But please, don’t let that dissuade you from checking it out. I’m mortally afraid that I’ll turn potential readers off by reviewing it and my poor attempts at trying to describe exactly what it is. But imagine, if you will, that Saki (H. H. Munro) didn’t die in WWI and decided to rewrite Ovid’s Metamorphosis and a few Lovecraftian short stories. Many of the stories and poems in this collection had Saki’s sly, often acerbic and dark, wit and a definite mythological/phantasmagorical slant. The book is a fascinating collection of short stories, poems, and tiny vignettes, each small fantasy ending with a Saki-esque twist. There is, quite literally, something for everyone, as long as you have a rather mordant and morbid sense of humor. 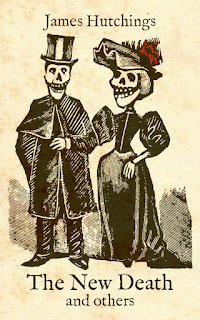 The author describes it as dark fantasy and it is that. There is definitely a Greek myth feeing to the stories, but they tend to be much more amusing that the typical myths. And it isn’t all fantasy. Or rather, I guess it is, but my favorite story in the collection was The Adventure of the Murdered Philanthropist that literally had me laughing out loud. I was reading it in bed and my husband thought I had lost my mind. When I picked up the book the next night to continue, he looked at me, sighed, and said, “You’re not reading that again, are you?” I was clearly disturbing his fifth reading of one of his books on the Civil War. Or else he was aggravated that he wasn’t having as much fun reading his book as I was reading this one. Get over it.

Anyway, The Adventure of the Murdered Philanthropist was a new Sherlock Holmes-type story, except a lot more fun, complete with murder and a brilliant consulting detective. Just to give you a taste, there is one point in the story where one of the characters is described as the sort who makes large contributions to the RSPCA. Then there was a footnote defining the RSPCA as The Royal Society for the Practice of Cruelty to Atheists. That footnote induced one of the moments that disturbed my husband so much: I broke out laughing. Okay, maybe you had to be there, though I’m glad you weren’t because our bed isn’t quite that large.

So there were stories like The Adventure of the Murdered Philanthropist (I would have bought the book just to get that story—it was that good) which continues the Sherlock Holmes tradition; Under the Pyramids, based on an H.P. Lovecraft story; The Mirrors of Tuzun Thune, based on a story by Robert E. Howard; The Garden of Adompha, based on a story by Clark Ashton Smith; and many, many others.
As I said, there is quite literally, something for everyone who has a sense of humor. It is difficult to convey just how much I enjoyed the various stories. I’m not much for poetry, but I did enjoy a few pieces just because of the wry humor.

I loved this book. I just wish I could convey a better feel for this collection. If you enjoyed stories like Saki’s The Open Door or The Great God Pan, then you will adore The New Death and Others. I hope I’ve convinced you to give it a try.

Just don’t read it in a setting where they’re likely to call the men with the long-sleeved, white jackets if you start laughing insanely in public.

Where can you get it?
The New Death and Others is available for the Kindle at: http://www.amazon.com/New-Death-others-ebook/dp/B005Q8Q8DY/

Thanks for the review! Helped!

You're quite welcome. I enjoyed it.