I know, I know, I've been a very bad person and haven't posted to my blog in a while. But I have an excuse (besides hurricane Irene, which is also a good excuse and I'm using it). I've been working frantically on a new holiday mystery novella called "Christmas Spirit". In fact, I'm getting ready to send it to my editor tomorrow (phew). 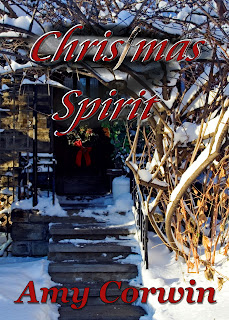 And right now, I'm trying to decide about a cover. Here is one candidate. It's actually very good about capturing the feel of the book because Eve, the poor heroine, has to plow through the snow with her mother and maid in tow when their carriage breaks down. And when they come to a house, they discover that the owner has been murdered! In fact, he was found with his throat cut just moments before Eve and her mother (and maid, let's not forget the maid) arrive.

Was it the ghostly apparition they glimpsed as they struggled through the snow? Or was it the guests, Mr. Danby and his father, Lord Wolverton? Or Anatoly, the flamboyant cook?

Will Eve and her mother survive long enough to find out?

Who can say, but stay tuned for more info about "Christmas Spirit" as we get closer and closer to a release date (hopefully, sometime in November). 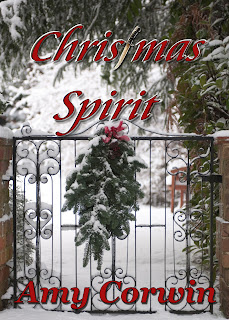 Here is another cover option (to the left).

Let me know which one you like better. I can use all the opinions I can get. I have no clue.

Then, I'll be hard at work on the next Pru and Knighton mystery, which follows up their story from "The Vital Principle". Pru has found another dead body and this time, the victim is related to her and she's convinced he did not commit suicide as everyone else claims. She's sure it's murder and asks Knighton for his assistance in proving it. I've got the first two chapters written, but haven't even settled on a title, yet.


Some of you who also read paranormals will be interested to know that I've also submitted "A Fall of Silver" to The Wild Rose Press. Wish me luck. That will be the second book, following hard on the heels of "Vampire Protector". If that submission goes well, I'll be working on the third manuscript, tentatively entitled "Smoke" and featuring the redoubtable Theresa Blackstone, who had guest appearances in both "Vampire Protector" and "A Fall of Silver".
Lots of irons in various fires. Despite that, I'm going to desperately try to do better about keeping the old blog going.
In the meantime, let me know what you're up to now that the weather is starting to cool down.
Posted by Amy at 10:25 PM